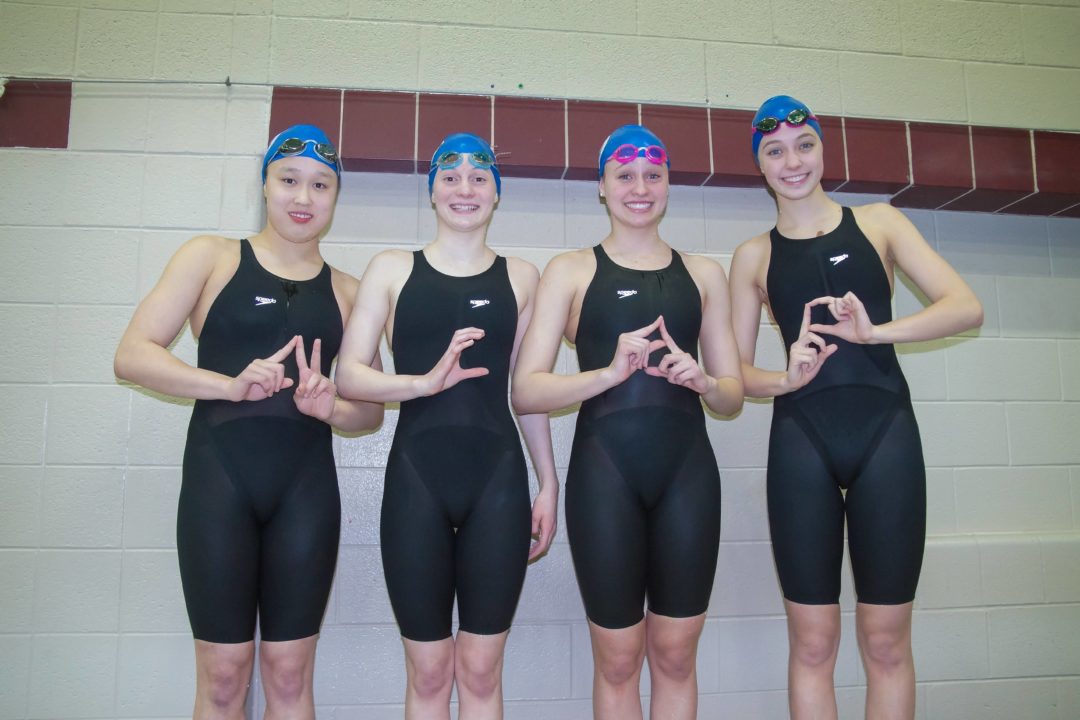 Just as we hit “publish” on the report about Andrew Seliskar’s National Age Group Record in the 100 breaststroke and Cassidy Bayer’s illustrious 100 butterfly, NCAP went for another record. This time, it was the 13-14 girls in the 800 free relay, who swam a 7:28.00 to end the first finals session of the meet.

The swimmers on the relay were Hannah Baker (1:54.5), Emily Meilus (1:52.8), Lea Gwennap (1:50.2), and Megan Byrnes (1:50.8). Byrnes is the swimmer who gained national attention when she broke a Virginia HS State Record in the 500 free, as just a freshman, at the AAA State Championship meet a few weeks ago. Gwennap might be the next mega-star of this program, as she had the fastest split and is still only 13.

The record that went down belonged to a really impressive group of swimmers: a few of whom our readers may recognize. In 2006, a North Baltimore relay that included Felicia Lee, Laura Harris, Liz Pelton, and Andrea Staub were a 7:29.39. There’s a little bit of hardware in that group.

Hannah Baker swims for Chris Natoli at the Burke facility, the team’s largest, near Fairfax; the other three swim for John Flanagan at the Tyson’s YWCA for John Flanagan a bit further north in the DC area. Flanagan is also the coach of Andrew Seliskar, who broke the 15-16 100 breaststroke NAG Record earlier in the session, and Janet Hu, who has her name on a few records as well.

hey swimswam i noticed something pretty interesting in the psych sheet for this meet for tomorrow. jack conger is swimming one event this entire meet and that is the 200 fly and he will be racing seliskar, who is a 1:45. should be pretty interesting