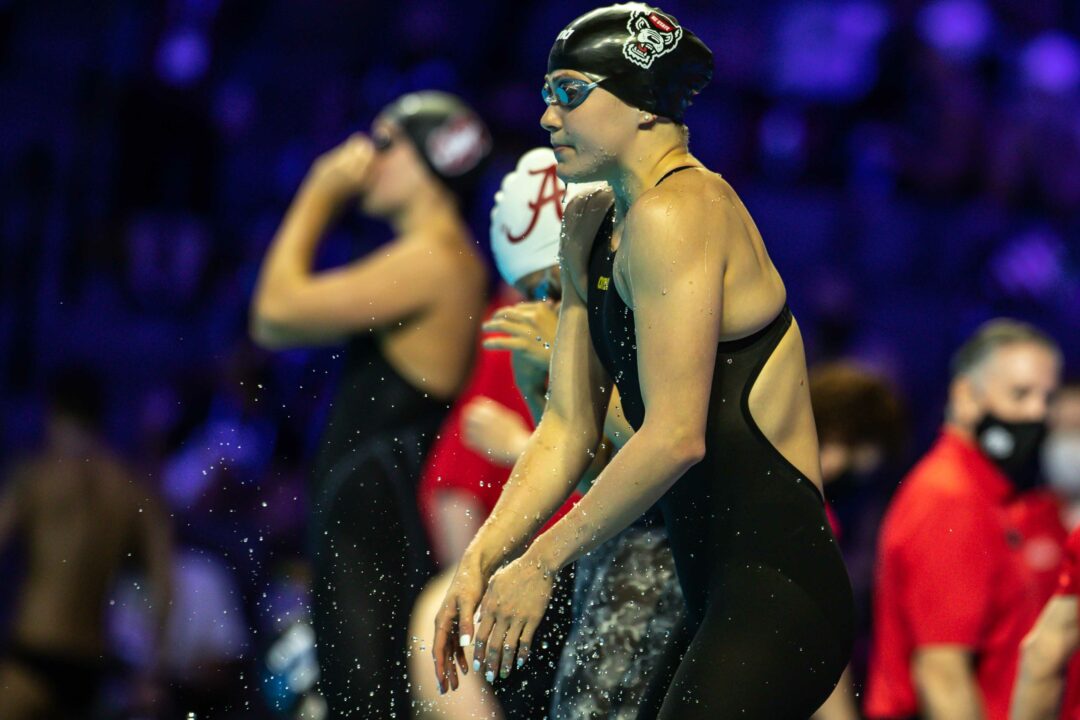 Katharine Berkoff won two individual events and was a part of two winning relays as both the NC State men and women defeated Duke. Archive photo via Jack Spitser/Spitser Photography

North Carolina State University hosted Duke University on Saturday, January 15th. Neither team suited up today. This was NC State’s first meet since their mid-season invitational. Duke competed in a tri-meet with Queens University of Charlotte and Tennessee on January 8th.

The NC State men dominated the meet, winning every event up until they began to exhibition races. Freshman Sam Hoover led the way as he captured individual victories in the 200 freestyle (1:36.25) and the 100 freestyle (43.84). Senior Rafal Kusto also won two individual events. Those wins included the 100 (53.84) and 200 (1:58.00) breaststrokes.

The Duke men were led by freshman Michael Jiang who won the 200 IM in a time of 1:49.79. That time would still have won even if NC State did not exhibition the event. Jiang out touched NC State’s Noah Bowers who swam a time of 1:49.83. Jiang also earned a second place finish in the 500 freestyle (4:34.80) finishing behind fellow teammate Brendan Driscoll who won in a time of 4:33.88.

Other first-place finishes include:

Before the scheduled dual meet, NC State also hosted Duke for exhibition races on Friday, January 14th. Duke suited their swimmers, and almost all of the NC State swimmers suited.

NC State will be back in action on January 22nd at Virginia, and Duke has their next meet scheduled for January 28th at home against North Carolina.

Guessing this answers one major question: no Noorgard on the NC state roster. Guessing he’s not coming.

Really interesting to see that NC State men lost events like the 500 and the 100 fly. They have shown great depth but props to Duke for taking home the first place points.

Maybe you missed the part of the article that says, ‘winning every event up until they began to exhibition races’