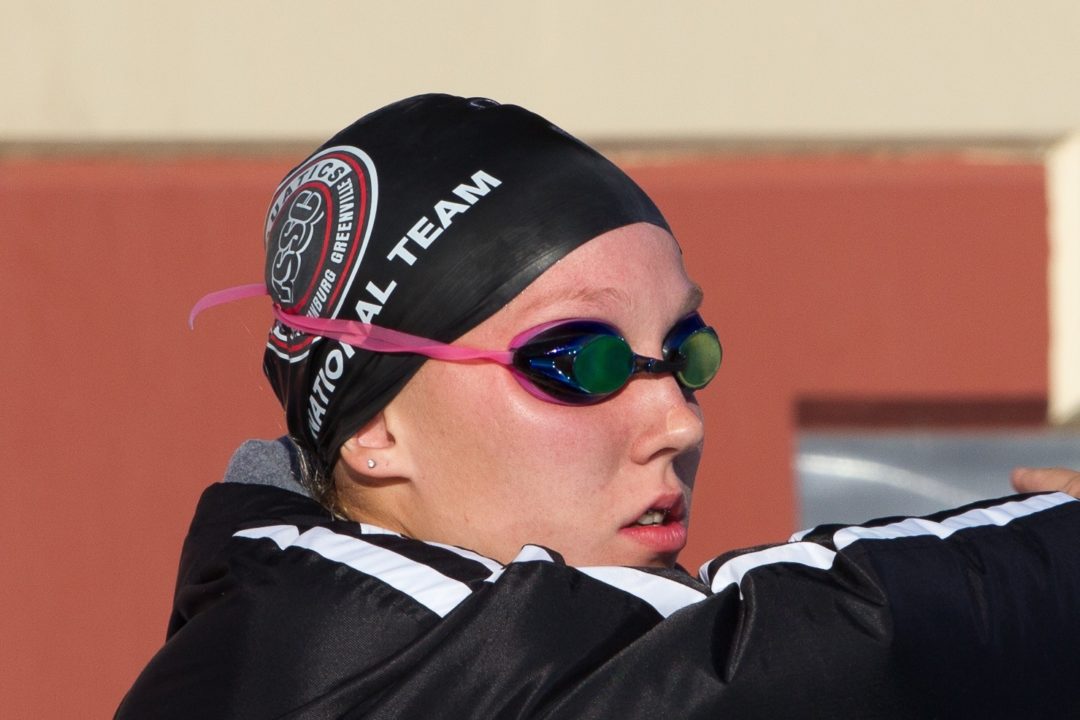 The squad from the WSY in Pennsylvania discusses their evacuation from the Georgia Tech Aquatics Center. (Haley Lips photo Courtesy: ©Tim Binning/TheSwimPictures.com)

Day 2 of the 2012 long course YMCA National Championship meet at the Georgia Tech Aquatic Center was exciting for more reasons than one. Midway through the finals session, fire alarms sounded and fire trucks rolled up to the 1996 Olympic venue, and swimmers were forced to evacuate the pool onto the nearby football practice field.

After the all-clear was sounded, swimming was allowed to resume, and though the evacuation will stand out in the minds of many in attendance, there were some hugely-memorable swims as well.

In the first boys’ event of the night, the 100 backstroke, Orlando’s Gregoriy Tarasevich and Upper Main Line Y’s Nic Graesser both crushed the Meet Record. After Graesser took the opening 50 to task, the 16-year old Tarasevich closed on fire to touch first in 55.56, with Graesser placing 2nd in 55.84. Those times both cleared the mark of 56.38 set by Ohio State standout Steven Zimmerman in 2010.

Tarasevich is a Russian National, but that swim still ranks as the second-fastest by an American-trained 16-year old in 2012, behind only Olympic Trials finalist Ryan Murphy. He traveled back home earlier this year to earn a silver medal at Russia’s Junior National Championships, but this time ranks him 8th in Russia this year (and as the fastest teenager).

The momentum continued to roll in the next event, when Indiana-bound Haley Lips from the Middle Tyger YMCA broke another Meet Record with a 4:17.56 in the girls’ 400 free. This time, it was a young Orlando Y swimmer (15-year old Kendall Dawson) who was the tough-luck runner-up, as her 4:17.80 was also good for silver. Those times both took down the 2010 record of Shelby Fortin by two seconds.

Other record-breakers on day 2 include Graesser’s Upper Main Line teammates in the girls’ 200 medley, where the group of Emily Cornell, Devonne Moore, Maddie Zimmerman, and Shannon Rauth swam a 1:58.44 to cut 1.01 seconds off of the old record. With Lips swimming the fly leg, Middle Tyger was also better than the old record in 1:59.30.

YMCA of the Triangle Area’s Joe Bonk won the men’s 50 free in 23.02, which won by 8-tenths of a second. The YOTA team in North Carolina has been having a spectacular summer. Bonk with that swim breaks the two-year old record of Tim Squires, and will head just north to headline the incoming class at Virginia Tech.

Another big swim from YOTA came from Jonathan Glavich. He finished just 19th overall, but the 14-year old posted a 4:08.58 in prelims. That takes down a 2002 North Carolina State Record that previously belonged to a certain Olympian named Ricky Berens at 4:09.63. Glavich wasn’t able to better his time in finals, but still earned an entry in the record books.

There were other standout swims that didn’t quite break records as well. Ohio State commit Chris DePietro won the men’s 200 IM in 2:06.62. That’s nearly a three-second lifetime best for him, and with his better race the 400 IM yet to come, there’s a great chance that he could take out the Meet Record of 4:27 out in that race.

Team Scores
The powerhouse teams are emerging already at this meet, with Middle Tyger YMCA sitting at 361 points, using depth to place well ahead of the Upper Main Line YMCA in 263. The Wilton YMCA in Connecticut didn’t get any wins on day 2, but their powerful and deep lineup have kept them in touch at 3rd with 260.5 points.