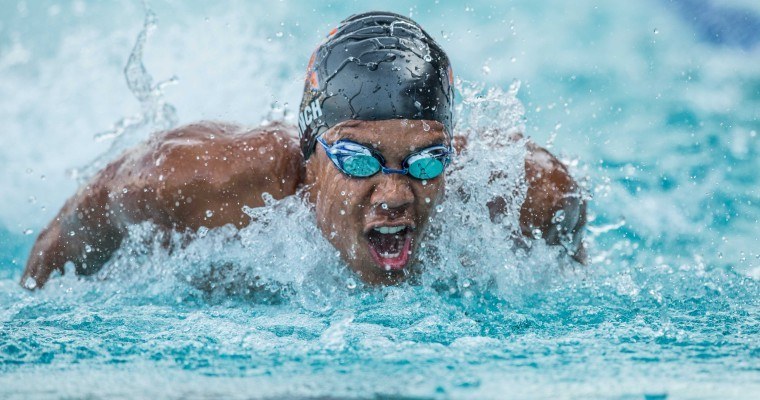 The defending NCAA champion Cal Golden Bears officially opened their season on the road, rolling past University of the Pacific with a shuffled early-season lineup. Archive photo via Mike Lewis/Ola Vista Photography

The defending NCAA champion Cal Golden Bears officially opened their season on the road, rolling past University of the Pacific with a shuffled early-season lineup.

California had already competed in the Cal-Poly “King and Queen of the Pool” meet – an early-season pentathlon – a few weeks ago, but this was the first taste of official dual meet action for the Bears.

Star backstroker Ryan Murphy got to test out his speed, swimming the 50 and 100 frees. He won the 100, nearly cracking 45 seconds and was also second in the 50 free and 100 fly.

One swimmer who did stay in his primary event was freshman Justin Lynch. The highly-regarded prospect put up an impressive 1:47.99 to thoroughly dominate the 200 fly and earn his first varsity win.

Though Cal went 1-2-3 or better in most of the events, the Pacific Tigers weren’t without bright spots of their own. Sophomore Curtis Klein was one of only three double individual winners at the meet, ruling the backstroke events vacated by Murphy.

Murphy’s backstroking partner Jacob Pebley got a win of his own in an off-event, going 1:40.30 to beat senior Adam Hinshaw for the 200 free title. Third in that race was breaststroker Chuck Katis, who was an impressive 1:42.61 in a stroke he doesn’t often swim.

Cal swept the relays. The 200 medley saw Josh Prenot, Hamilton, Kyle Gornay and Tyler Messerschmidt pick up the win in 1:28.00, exactly one second up on Cal’s second team, which included Pebley, Katis, Lynch and Fabio Gimondi.

The meet closed with the 400 free relay, where Williams, Messerschmidt, Gimondi and Lynch put up the fastest time at 3:00.66, though that relay was also exhibitioned.

Cal now returns to Berkeley for their home opener next Friday against the University of Hawaii, while the Pacific men are off for two more weeks before taking on Nevada at home.

Damn. What an intimidating photo of Lynch.

After a quick glance through the results, I’m proud to present the “Ouch!” award to Tyler Messerschmidt for his excellent demonstration on how not to swim the 100 fly. 22.8 going out… drumroll…. 28.4 coming home, for a 51.27. I would love to see video of that race.