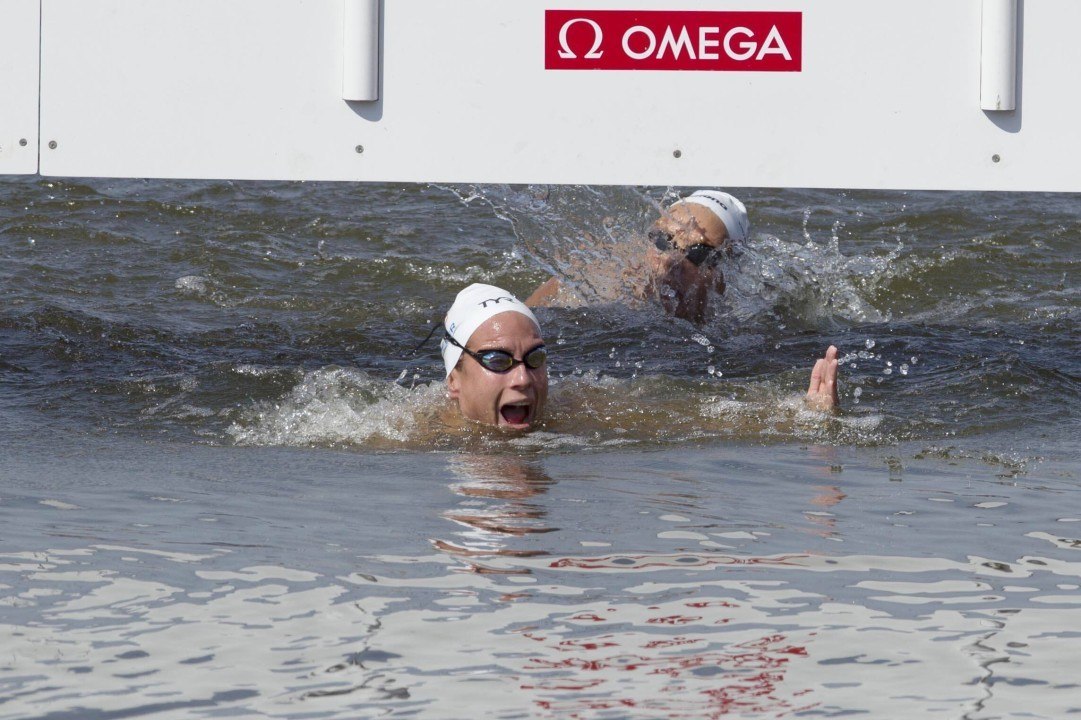 Aurelie Muller of France took the women’s 10 km this morning in Kazan, finishing just over two seconds ahead of Sharon van Rouwendaal of the Netherlands.

Muller earned an Olympic berth while winning the event in a time of 1:58:04.3.

This is the first time that she has experienced this level of success in the 10 km, though. At last year’s European Championships, she was only seven tenths of a seconds away from a podium finish.

Muller did not swim the 5 km in Kazan, focusing on the 10 km so she could earn a spot in the event in Rio.

Van Rouwendaal, who won a silver medal at the 2011 World Championships in the 800 freestyle, was extremely succsessful in both the 5 km and 10 km events at the 2014 European Championships, winning the 10 km and finishing second in the 5 km.

The FINA qualification procedure for the 2016 Olympics is as follows:

Step 1: The top 10 men and top 10 women at the 2015 World Championships in the 10K will earn an Olympic qualifying spot.
Each nation can only qualify a maximum of two swimmers in each gender

Step 2: Any nation that didn’t have anyone qualify through step 1 can send up to two men and two women to the 2016 Olympic Marathon Swimming Qualifier. The top 9 men and top 9 women at that race can also earn Olympic bids, but each nation may only qualify up to one man and one woman for the Olympics this way.

There are extra qualification procedures that ensure that each of the five continents has a representative, and that the host nation (in this case, Brazil) gets at least one representative in each race. Ultimately, 25 men and 25 women will qualify for the Olympic race. You can read FINA’s full qualifying procedures here.

The top ten in the women’s 10km include:

So the US is done then. Only sending one swimmer?

Becca Mann can qualify by placing top nine at the 2016 qualifier in Portugal. See the step #2 language.

Only swimmers from countries which does not have one person qualified are eligible for the 2016 qualifier at Setubal..

Don’t Becca & the other U.S. women have another chance to qualify for Rio thru a special qualifier in 2016 so the U.S. sends two??? Thought I read that somewhere.

SUNY cal – no. The only way to get two women to the Olympics in open water is to have them both finish in the top 10 at the World Championships. The “special qualifier” applies only to nations that don’t have a swimmer already qualified. Read more here: http://swimswam.com/ioc-announces-open-water-diving-polo-synchro-qualifying-systems-2016-olympics/

SUNY cal – The second qualifying meet is only for nations that don’t have an Olympic qualifier yet. Any team that got 1 or 2 athletes into the Olympics this week are not eligible for the second qualifier.

And 1-2 for Philippe Lucas swimmers!
Lucas’ magic once again!

She actually trained in Canada for part of the year too

Lucas also coaches the French swimmer who placed 6th in the men’s 10k.

Bobo will be happy about Aurelie Muller’s performance I’m sure! Congratulations to Haley Anderson on qualifying for her second Olympic Team! I’m a little sad for Becca Mann, who placed 14th and will now be unable to qualify for the Open Water Swimming event in Rio; I assume this means her focus will now switch to pool swimming, and I wish her the best of luck in her preparations for US Olympic Trials!

I love swimming…some days the greatest day of your life is in a race where 8th or 10th is better than 1st in any other race.

So in this case 10+5 more from Setubal, since Brazil qualified. Am i right?