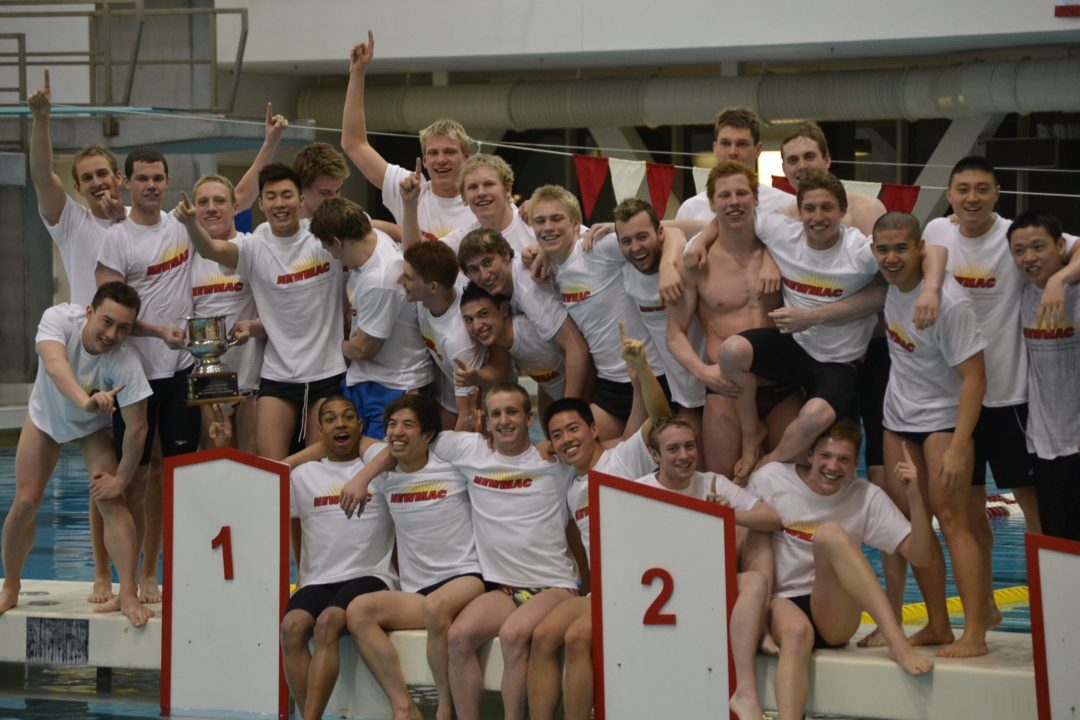 The Engineers' swimming and diving ended the MIT Winter Invitational in first place with 1322.5 points, ahead of Keene State, who finished in second place with 980.5 points. Current photo via Tim Binning/TheSwimPictures.com

CAMBRIDGE, Mass. – Men’s swimming and diving ended the MIT Winter Invitational in first place with 1322.5 points, ahead of Keene State, who finished in second place with 980.5 points. Sophomore Brad Jokubaitis (Newtown, Pa.) broke the MIT record in the 200-yard backstroke and classmate Luke Schlueter (St. Louis, Mo.) broke his own school record in the 200-yard butterfly. On Saturday alone, the Engineers earned 21 NCAA B cuts, and, throughout the weekend, the Cardinal and Gray got a total of 43 cuts.

To start the second session of the three-session meet, MIT’s 200-yard medley A relay took first with its time of 1:31.31, finishing almost a second and a half ahead of Keene State and narrowly missing the pool record of 1:31.05 that was set in 2012. The B relay touched in third with a 1:33.11, finishing a few tenths of a second behind Keene State’s A relay.

Tech took second through fifth place in the 400-yard Individual Medley, with sophomore Alex Lednev(Glenmont, N.Y.) touching in second with his 4:02.58, freshman Alexander Luh (San Jose, Calif.) following soon after in third in 4:04.04 and classmate Jeremy Ellison (Carmel, Ind.) touching in fourth with a time of 4:07.11, with all three earning NCAA B cuts. Sophomore Evan Olin (Ossining, N.Y.) came in fourth in 4:13.38.

MIT swam very well in the 100-yard butterfly, claiming first through fourth place, with all four swimmers going under the 50 second mark and earning B cuts. Sophomore Sean Corcoran (Huntersville, N.C.) was first in 49.22, Schlueter touched in second with a time of 49.50, junior Austin Fathman (Hamilton, Mich.) came in third place in 49.67 and senior Remy Mock (Victoria, British Columbia) was fourth with a time of 49.70. Senior Michael Liao (Newport Beach, Calif.) was first in the 100-yard breaststroke with a B cut time of 57.01, just narrowly off his own pool record time of 56.25 from last season.

Sophomore Bo Mattix (La Canada, Calif.) was first in the 100-yard backstroke with a time of 49.74, returning to his position as the fastest male 100 backstroker in Division III in the nation at this point in time. Jokubaitis touched in second place in 50.63 and Corcoran was third in 50.81, with all three earning B cuts. To end the second session, the MIT 800-yard freestyle relay were second behind Keene State with a 6:53.18 and the B relay followed soon after in third with a 7:02.19. Time trialing the 100 breast at the end of the meet, junior Ben Bauchwitz (Hershey, Pa.) swam a 57.79, cutting two-tenths of a second off his time from the actual event. On the 1-meter board, senior Danil Tyulmankov (Stamford, Conn.) came in sixth place with a score of 276.25.

To start the third and final session, Mock time trialed the 200 freestyle, swimming a 1:39.56 in a deserted pool. That time would have earned him first place in the event that was swam this morning by over a second and a half. Winning the 200-yard backstroke and breaking the school record was Jokubaitis with his time of 1:48.40. Mattix was second in 1:49.95, Lednev came in third in 1:50.97 and Corcoran touched in fourth place in 1:52.07, all earning B cuts.

Fathman and sophomore Daryl Neubieser (Saratoga, Calif.) both got B cuts in the 100-yard freestyle, with Fathman touching in first place with a 45.07 and Neubieser following soon after in second in 45.50. Liao won his second event of the day, the 200-yard breaststroke, with his time of 2:03.43, and Bauchwitz touched in second with 2:04.44., both getting B cuts. Schlueter won the 200-yard butterfly with a time of 1:48.22, breaking his own MIT record from last season. Mock was second with a 1:50.87 and sophomoreThomas Norris (Cincinnati, Ohio) was fourth with a 1:52.92. All three Engineers got B cuts. Ending the weekend on a strong note, the MIT 400-yard freestyle A relay touched first in 3:01.47, out-touching Keene State by three-tenths of a second.

This was Tech’s final meet of the 2013 portion of the season. MIT will next compete at home on Saturday, Jan. 11 against Coast Guard.

The above is a press release taken from the MIT Athletics Website. For complete meet results, click here.