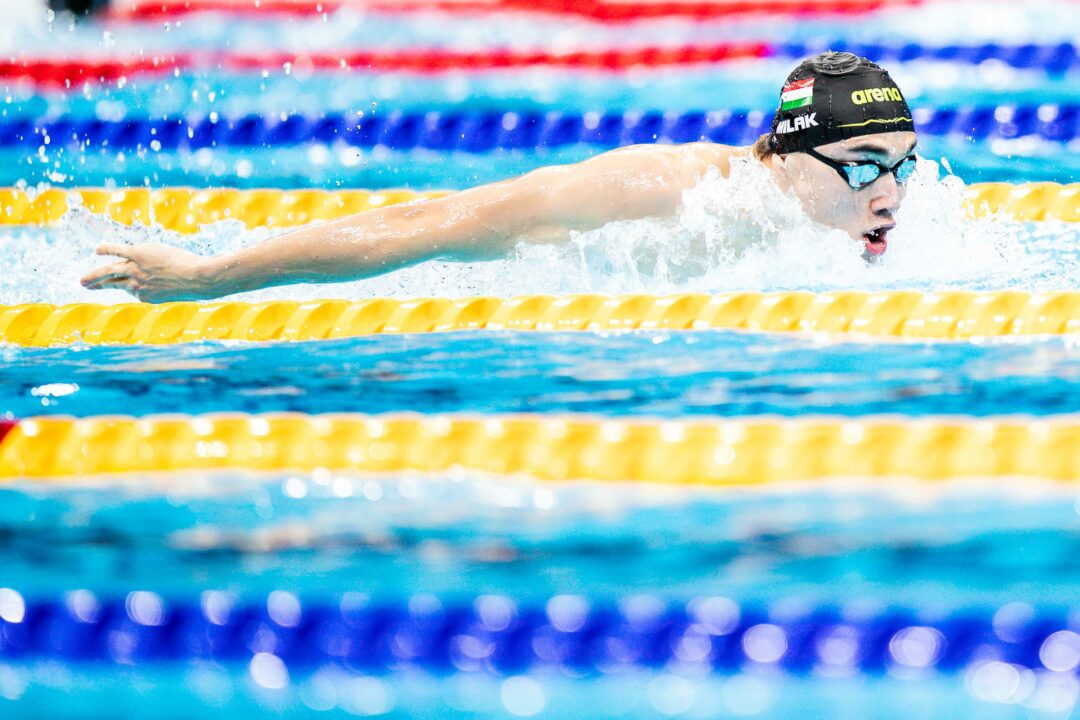 LEN Bars Russian & Belarusians From Competing In Its Events

“LEN strongly condemns the actions of the Russian government supported by Belarus, in its invasion of Ukraine,” the organization said.

The Hungarian Swimming Association released a relatively small roster for the upcoming Short Course European Swimming Championships which will take place in Kazan, Russia from November 2 – 7, 2021. While all-stars Katinka Hosszu and Boglarka Kapas are among those not included on the roster, the nation will still send some heavy hitters including Kristof Milak and Szebasztián Szabó.

Hungary’s most dominant swimmer right now is butterfly prodigy Kristof Milak who stunned the world back in 2019 when he broke a Phelps world record in the long course 200 butterfly. Milak won gold in the event at the 2019 World Championships in a 1:50.73 to become the fastest man in history. Milak followed that up 2 years later with an Olympic gold medal-winning swim at Tokyo 2020 when he hit a 1:51.25 Olympic record, along with a silver in the 100 fly.

Milak recently got a chance to show off his short course power and versatility at the Budapest stop of the 2021 FINA World Cup where he won the 50 backstroke, silver in the 100 butterfly, and bronze in the 100 and 200 freestyles.

On the women’s side, Ajna Késely and Zsuzsanna Jakabos will lead the way into the meet. Both women won medals for Hungary at the most recent short course Euros back in 2019 with Késely taking 400 free bronze and 800 free silver while Jakabos earned 200 fly bronze and 400 IM silver.

Katinka Hosszu‘s absence from the Hungarian Euros squad is not all that surprising considering that she hasn’t raced since the Tokyo 2020 Olympics. Hosszu was absent from the International Swimming League regular season in which her team, Iron, finished 7th overall. Team Iron competed in the 11th play-in match against Tokyo, DC, and New York and wound up securing a spot in the play-offs which take place in November. Hosszu has also been absent from the FINA World Cup this year, the first three stops of which took place in Berlin, Budapest, and Doha. She is not expected to race at the final stop in Kazan either.

Hosszu was the star of the meet at the last iteration of the Short Course European Championships back in 2019 when she won quadruple gold in the 200 butterfly and all 3 IM events.

Just as Hosszu has been, Boglarka Kapas has been fairly quiet since competing in Tokyo. Kapas was not retained by the New York Breakers this year during the inaugural ISL draft and was instead picked up by Energy Standard, but didn’t race during the regular season. Two significant absences on the men’s side are Olympic finalists Adam Telegdy (Kapas’ partner) and David Verrasztó.

Well, that was said quite some time ago

Kapas was not retained by New York. She was drafted to Energy

Milak will be doing Euro SC championships, Hungarian SC nationals, and the SC Worlds. I am so so looking forward to all his events. Hopefully, he can make a breakthrough in his sprint and freestyle.

I’m wondering, whether he’s doing ISL or not. Any inside infos ?

Speaking of ISL, it’s strange because he talked about not letting his teammates down for this year’s ISL in August when he came back from the OG, and then a month later after he changed his coach, he didn’t mention ISL at all when announcing his schedule in November and December… I guess he’s like Hosszu and will completely sit out of the season 3 even getting drafted (Hosszu still has a chance to race in the play-offs I guess but Milak definitely not). The reason? I don’t know given the nonpayment scandal…

If you want to do an article on Sweden – Sjostrom in, Coleman & L.Hansson not. List found at the bottom of this article: https://www.svt.se/sport/simning/sjostrom-21

Milak’s 100 Fly SCM in Budapest was slower than his Olympic 100 Fly LCM. I definitely think he has way more to deliver in SCM.

I think Hosszu is gonna retire within a year

She said to Hungarian media that she wants to go to Paris.

Surely she won’t still be swimming the 400 IM in Paris.

I’m sure the IOC will comp her some tickets.

That’s nice to hear. She’s earned a Paris vacation after her long and successful swimming career.

This is literal fan behavior

Also, if Bruce gemmell says he can see her going 3:55, then I believe in him

Same was expected from Ajna Késely. Hasn’t happened in Tokyo. It is very possible that “pedestrian “ Ledecky will still remain the fastest ever in 400FR after Olympics in Paris. Listen to Titmus’ revelation: it’s extremely hard to be like “pedestrian” Ledecky. Summer McIntosh with all her amazing achievements for her age in middle and long distances isn’t that fast yet at 100 and 200 distances to match the status of Ledecky and Titmus. Will she became a better sprinter? Let’s see. Great endurance at young age isn’t that rear phenomenon. Do you know who was the youngest and the most promising long distance swimmer in the beginning of 2012.
No, not Katie Ledecky. But Becca Mann.

my god do you literally change usernames when you “fight” with Ledecky will go 3:55 in Paris? literal fan behavior 🤡🤡