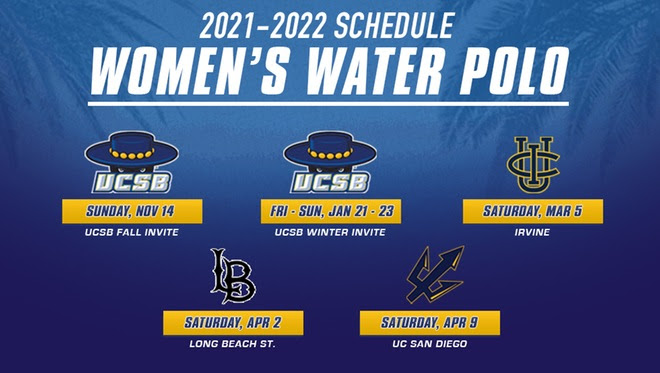 The team will kick off a campaign that includes two home tournaments and three away tournaments at the UCI Fall Invite on Nov. 7. Current photo via UC Santa Barbara Athletics

The Gauchos are coming off back-to-back years which were unfortunately cut short due to the COVID-19 pandemic. They will look forward to a fresh start at the UCI Fall Invite on Nov. 7, kicking off a 2021-22 campaign that includes two home tournaments, three away tournaments, and three other non-conference games on top of their six-game Big West Conference slate.

After their opening week of play, the Gauchos will be back home at Campus Pool for the UCSB Fall Invite on Sunday, Nov. 14. After more than a two-month break, they will resume competitive action over the annual three-day UCSB Winter Invite from Jan. 21-23.

The following week, Santa Barbara heads inland to face Biola and Redlands on Jan. 28. Cal Baptist will host the Gauchos on Jan. 29.

The Gauchos begin conference play with a Saturday home meeting against UCI on Mar. 5. They will be away for their next two Big West games at CSUN (Mar. 11) and Hawai’i (Mar. 25).

From there, head coach Kay and her team travel to Hawai’i for the Big West Tournament, taking place from April 21-23, as the Gauchos will battle for their first trip to the NCAA Tournament since 2016.

A successful trip to Honolulu would send UCSB to Ann Arbor, Michigan for the NCAA Tournament from May 6-8.