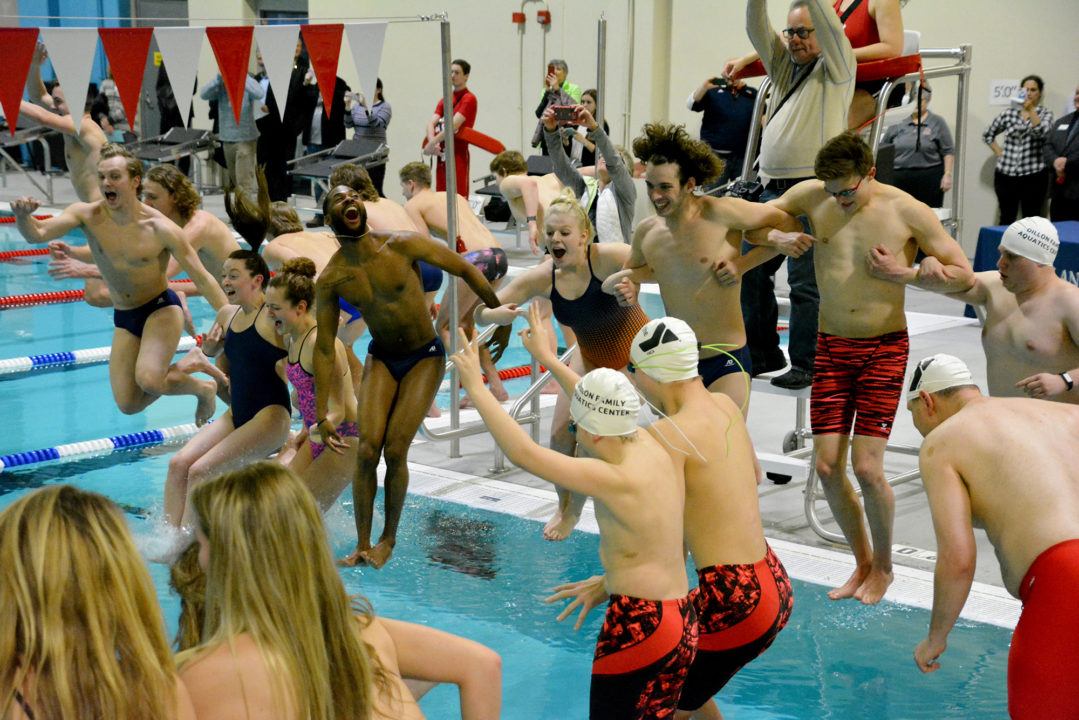 Hundreds from the Fremont community joined Midland University swimmers on Tuesday, for the first big splash in the 700,000-gallon pool of the new $15.2 million Dillon Family YMCA Aquatic Center.

Smiles beamed as the swimmers splashed in what will be their new home for practice and competition. The world-class facility at the Fremont Family YMCA features a Myrtha pool and diving well that can be configured for either twelve 25-yard lanes or six 50-meter lanes for competitive swimming.

Tuesday’s ribbon-cutting ceremony was another first in an inaugural season that has seen the Warriors collect a medal and exceed expectations at the Mid-South Conference Championships and improve on personal-best times.

“This right here is nicest pool, the No. 1 pool, in the state of Nebraska. It’s one of the nicest in the region,” said Midland Swimming Coach Ryan Bubb, a two-time Olympic trials qualifier. “There’s no arguing that we’re going to have some of the best practice facilities around. We’re going to be able to train really hard. We’re going to have a great team, a nice big team here, that’s going allow us to compete for conference championships and hopefully down the road some national championships as well.”

In August 2016, Midland announced the addition of men’s and women’s swimming as the newest varsity-level sports. After a nationwide search, Midland hired Bubb to lead the new program.

As a coach, Bubb has inspired his team with his welcoming attitude, emphasis on creating a family atmosphere, and competitive spirit.

Skidmore has enjoyed the opportunities provided at Midland.

“Getting a scholarship [to swim here] means that I get to continue the sport that I love also while getting my education for the job I want in the future,” Skidmore said after Tuesday’s event.

Darmando Knowles, a junior from Nassau, Bahamas, understands and appreciates the importance of the scholarships available to more than 800 student-athletes in 31 different sports at Midland, which is home to the largest athletic department in Nebraska.

“Being from another country, the scholarship helps out a lot,” Knowles said. “It gives me the opportunity to go to school and swim. It’s a great opportunity.”

Once the crowds cleared out after the ceremony, Midland swimmers were able to climb up on the starting blocks, dive in, and take a lap in the new pool. They plan to get a few more laps in this pool before heading to the NAIA National Championships on March 1-3 in Columbus, Georgia.