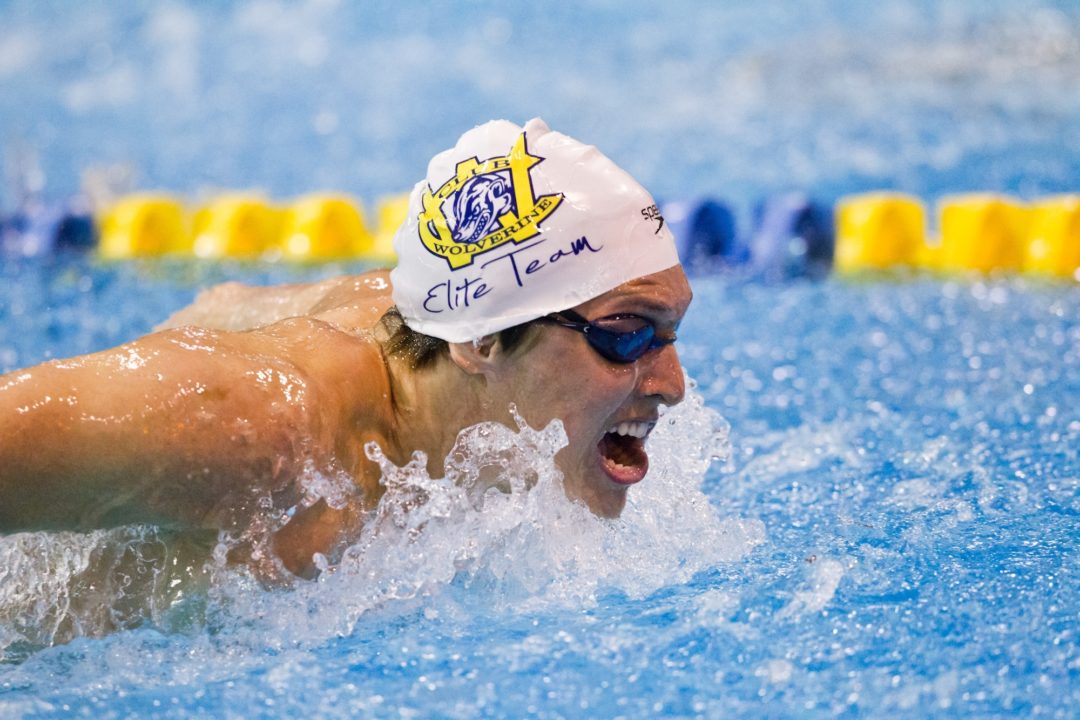 The freestyler's made a statement in South Bend on Saturday with 6 new national top times for the season. Current photo via Tim Binning/TheSwimPictures.com

The Michigan men, Indiana women, Auburn men and women, and Notre Dame men and women met in South Bend, IN for a weekend of fast swimming. On Friday night, Notre Dame hosted the Dennis Stark Relays as a warm up for the tri-dual meets on saturday. The Dennis Stark Relay Meet featured all of the above mentioned teams, as well as Cleveland State University and Valparaiso University. The meet included traditional NCAA relays, as well as 3×100 relays of stroke, the 4×100 IM relay, the 2×100 IM relay, the 2×500 freestyle relay, the 2×200 freestyle relay, as well as 1m and 3m diving “relays.”

Connor Jaeger won both the 500 and 1000 freestyle with a 4:24.56 and a 9:02.54, respectively. His 1000 freestyle time will put him on top of the NCAA top times list. He was only the first to individually swim the fastest time in the nation. Jaeger’s teammate, Michael Wynalda fought to the end in a very close race with Notre Dame’s Frank Dyer. Both were faster than the Joao De Lucca’s swim from friday night, posting 1:37.31 and 1:37.42 to take the top two times in the country so far. Auburn’s Marcelo Chierighini dropped a bomb in the 50 freestyle, beating Derek Toomey’s season best time of 19.99, touching the wall for the win at 19.93. Chierighini had another great race leading off the 400 freestyle relay. He touched the wall just behind Michigan’s Bruno Ortiz splitting 44.06 and 44.09. The Michigan men closed out the meet with the final Nation’s top time in the men’s 400 freestyle relay. They won with a 2:56.97 and Auburn finished second with a 2:57.69, earning the number two spot in the country.

Although none of the women posted the nations best time in any event, there were several great swims that put them in the top 5 in the country. Auburn won the women’s 200 medley relay with a 1:41.97. Notre Dame was just behind them at 1:42.84.

The Michigan men earned their other top time in the men’s 200 medley relay. They won the event with a 1:27.85.

The Auburn women finished 1-2-3 in the 100 backstroke, which is very impressive with the amount of depth between the three teams in the backstroke events.

The Auburn women swept another event 1-2-3. Allyx Purcell threw down a 22.87 to win the race. She was the only swimmer under 23 seconds. She added her second win on the day in the 100 freestyle, winning with a time of 50.30. Frank Dyer posted a 44.34 to win the individual 100 freestyle, although two faster times were swam leading of the 400 freestyle relay at the end of the meet.

After her third place finish in the 100, Auburn backstroker Sarah Reynolds won a very close race with Indiana’s Brooklyn Snodgrass, touching the wall at 2:00.35 and 2:00.64.

Joe Patching had a strong 200 backstroke after a very close second place finish in the 100. His time of 1:45.85 was the best time of the day by almost a second.

Emma Reaney added her second win of the day with her 55.03 in the 100 butterfly.

Wojciechowski ended up winning his second individual event with a victory in the 100 butterfly, swimming to a time of 48.24.

I’m not sure if Inter-squad meets are being counted, but Clay Youngquitst’s time from the Texas meet of 1:35.0 is the fastest time of the year so far. I know he suited up but still that’s a great time for this early in the season!

Mead – The Texas Inter-squad meet was not in USA Swimming’s 2013-2014 season database, so I did not take those swims into consideration for this article. There were some very impressive times at that inter-squad meet though.

Is Connor Jaeger a senior this year?

Naya Missy – he sure is.

Actually 44.06 was by Bruno Ortiz not Wojciechowski. Michigan’s 400 Relay was switched around in the results.

Yeah… I couldn’t believe the freshman and Ryutaro were going the splits they went on the freestyle relay. Now the splits make sense. I was about to anoint Bottom as a genius, mad scientist.

A few freshmen did show up with some fast times. Great to see some young cats stepping up… maybe we will be able to hang around the Top 3 again this year at NCAAs? I’m seeing some sprinters and even a possible backstroke leg for the Medley Relay.

Thanks guys, have corrected this to reflect that Ortiz was the anchor.