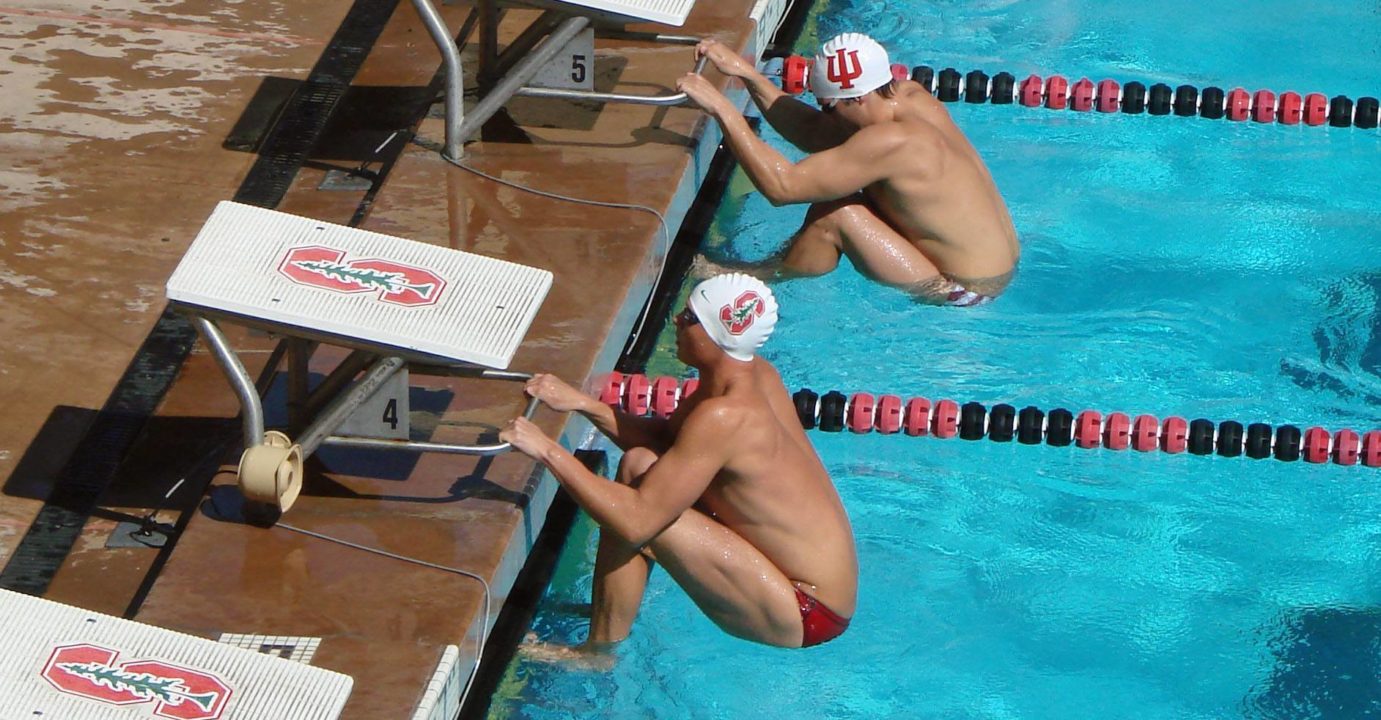 In the second stop of the Hoosiers California trip, they fall again to the Stanford Cardinal. (Photo Credit: Dean Ottati)

Stanford won 12 (11 swimming total with exhibition) of the 16 events at Saturday’s duel versus visiting Indiana, finishing 183-111 at Avery Aquatics Center. This was the second stop in the Hoosiers Bay Area action this weekend after falling to Cal last night.

Stanford head coach Ted Knapp was pleased with the Cardinal effort: “We just finished a three week training cycle and I have a real enthusiasm for what we did.  I’m excited to get started on the next one.”

Stanford opened their season to a non-traditional “spin the wheel” meet against UC Santa Cruz, but followed a traditional 16 event format against the Big 10 competitior.

Kicking off the meet was the 400 medley relay, where Stanford’s A team blew out the field. David Nolan, Mason Shaw, Gray Umnack and Connor Black finished in 3:17.02.

Eric Ress and Cody Miller can hang with the best, but Indiana needs a stronger sprint flyer and freestyler on the back end of that medley to keep up with the best at the end of the year.

Stanford’s freshman went on to show how strong they are and will be this year individually, with five first-place (and one exhibition time win) finishes among the 12 individual swimming events.

“What you are always looking for to start the year is great leadership from above, and having some enthusiasm and excitement from a freshmen class,” said Knapp. “That is exactly what I saw today.”

Justin has been really enjoying the training at Stanford. He says, “The training’s a lot more focused on individual aspects of your race, and making yourself better rather than just plugging and chugging for 8000 yards.  It’s all about making yourself a better swimmer not just someone who can do the yards.”

The Cardinal would end up sweeping the 500 freestyle later in the meet with Jimmy Yoder finishing third in 4:31.92.

Following Ress’s valiant effort in the 100, Miller ended up earning the first individual win for the Hoosiers. He out-touched Stanford’s Mason Shaw in the 100 breaststroke, winning 56.57 with Shaw second at 56.69.

Tanner Kurz swam into the fifth spot for a point at 57.33.

As he said himself, “it’s hard to have a bad day in Palo Alto, CA”, and freshman Connor Black surely had a great day. He posted three victories on the day, one relay win with two individual victories. He captured the 50 free, posting the only time under 21:00 with his 20.31. Black went on to win the 100 butterfly in 48.22.

Following Black in the 50 was a 21.01 by Ethan Hallowell. A second behind Black in the 100 butterfly was Tom Kremer, plus Gray Umbach and Ben Lovell to finish the 1-4 Cardinal sweep in the event.

Last freshman to the talent triad was Max Williamson, who was not to be outdone by his classmates with two wins. First was in the 200 breast at 2:00.79, one second ahead of the field.

Williamson swam the fastest time in the 400 IM, that ended up as an exhibition swim once Stanford clinched the meet. That let Mike Hurley best teammate Schmuhl in the 400 IM, winning in 4:00.77 to Schmuhl’s 4:02.20.

In a quick interview with SwimSwam, Max Williamson, Connor Black, Justin Black and Justin Buck talked about their time thus far at Stanford and their goals for the year.
SwimSwam:  What are you guys looking forward to this season?
Buck: It’s always about bringing home that trophy.  Stanford has a huge history of winning and we want to add to it.
Black: We want to win a championship.  Bring home that trophy.|
Williamson: I think we’re most interested in making a name for ourselves and the University, bringing back the aura of “Oh my God, that’s the Stanford swim team; I want to be on the Stanford swim team. We want to give them more reason to want to be on it.”

On the diving boards, where Indiana normally clings onto for points, bounced in Stanford’s favor. On the 1m, the Cardinal claimed three of the top four spots with NCAA Champion Kristian Ipsen winning. They couldn’t recreate that in the 3m, where Indiana’s Darian Schmidt was able to finish 7 points ahead of Ipsen, but the Cardinal still claimed 2-3-4.

Stanford swam their 400 freestyle relay as an exhibition swim. It didn’t end well for the Hoosiers though, if the Cardinal would have scored that event they almost took places 1-2-3-4 on the Hoosiers. The Indiana A relay was able to finish .49 ahead of the Stanford D team.

Stanford Men will return to action in three weeks when they host Wisconsin on November 2nd.

The Hoosiers are back in action Oct. 25-26 as they host Texas and defending NCAA Champion Michigan in a double dual meet.

Poor Indiana took a brutal pounding two consecutive days. Maybe they can turn their tactical defeats into something else at NCAA. Many strong times in several events, but aside from Black’s 50, the rest of the 50, 100 freestyles were, kindly put, sluggish. That is both teams Achilles.