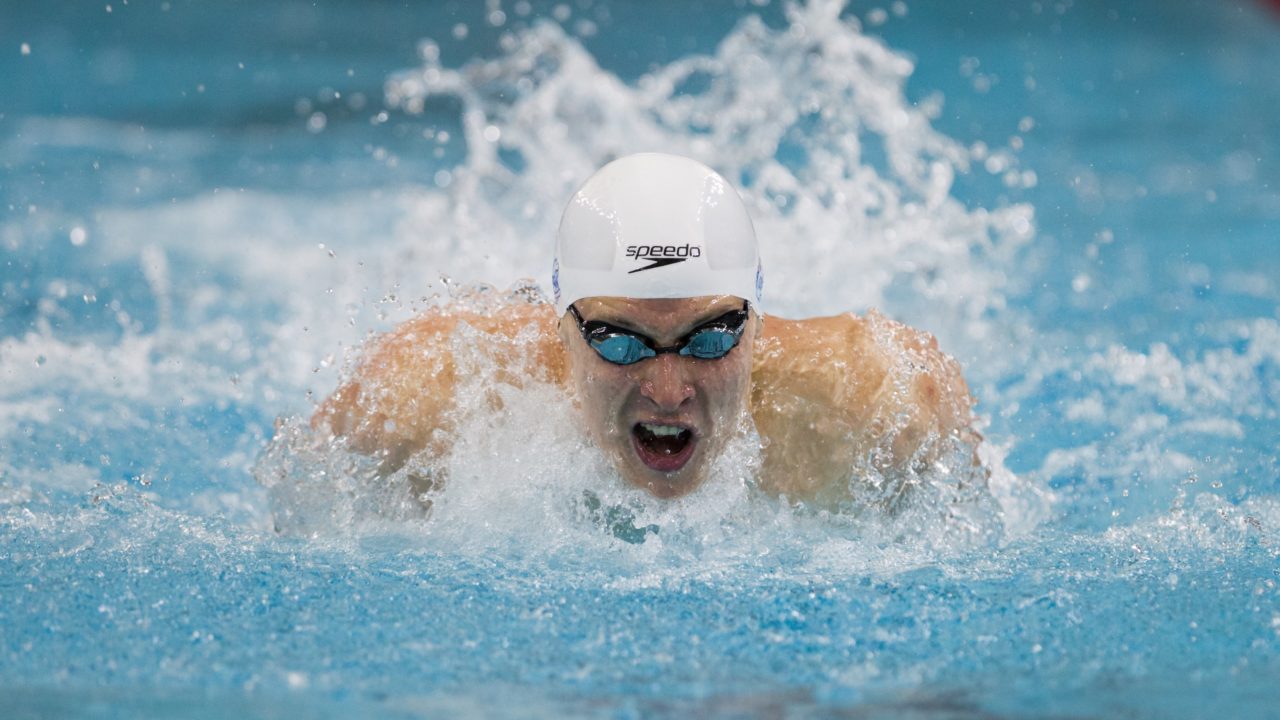 The Florida Gators, including Marcin Cieslak, swam some primary events and some secondary events, but all-around looked very good in the revival of their series with Minnesota. photo via Tim Binning/TheSwimPictures.com

The Florida and Minnesota men once had a good series going, as they matched up four times between 2003 and 2007. Florida won the first three of those matchups, but after Minnesota won the last edition of the meet in 2006-2007, en rout to a Big Ten title and 10th-place finish at NCAA’s, the series stopped.

They Gophers and the Gators revived that this year, though, at the University Aquatics Center in Minneapolis,  and Florida got back into the win column, moving to 4-1 in the all-time series, taking the meet 172-124, including partial or full exhibitions in the meet’s last 5 events.

Florida’s stout 400 medley relay, with no obvious weakness this season, opened things up with a 3:13.30. That’s easily the best time in the country so far, as this is the second-straight year since the London Olympics where the Gators have been unseasonably fast early in the year.

Solaeche-Gomez, the Spaniard, looks poised to be pushed into the spotlight by the Gators this year. He was very good on the breaststroke leg of that relay, the leg with the most uncertainty for the Gators, but also won the 200 free in 1:38.23. Main was 2nd in that race in 1:38.84, and freshman Mitch D’Arrigo took 3rd in 1:39.23.

Solaeche-Gomez didn’t flat-start a great 100 breaststroke, he was only 3rd in 56.76 while his teammate Matt Elliott won in 55.54 and Minnesota’s Nick Hatanaka was 2nd in 56.61, but his first two swims were good enough to call this a great meet for him.

The Gators were somewhere between primary events and off events in this meet. Marcin Cieslak won the 100 backstroke in 48.66, followed by teammate Christian-Paul Homer in 49.15. Minnesota freshman Daryl Turner was 3rd in 49.18; that’s not nearly as good as he was in his last meet, that earned him Big Ten Swimmer of the Week honors, but early in his freshman year, some inconsistency is not a big surprise.

Sebastien Rousseau won the men’s 200 fly in 1:47.24, bettering Minnesota’s Nick Orf (1:48.26) and Kyler Van Swol (1:48.84) by over a second. Van Swol missed last year’s championship season, but he was on the World University Games roster this summer.

The swimmer-of-the-contest for the Gophers was their senior, captain, and undeniable leader Derek Toomey. After a rocky start for the Gophers, he dove in to the 50 free final and knocked off Florida’s Brad deBorde for his team’s first win of the meet, swimming a 20.07 to deBorde’s 20.25.

After that win, the Gophers’ performances really improved. Coming out of the diving break (Florida’s Zach Hernandez won the 1-meter with a score of 356.85) Florida kept winning, but the Gophers just looked stronger in their best events.

Next, however, Minnesota got back in the winner’s circle with Van Swol beating Rousseau in the 100 fly 48.55-48.95. That would not have been the expected result necessarily after seeing the results of the earlier 200 fly.

Minnesota’s Dylan Zoe won the 3 meter in 340.58 to give Minnesota a split of the diving events.

Closing the meet, Wallace absolutely dominated the 400 IM in 3:51.43 – he didn’t race this event this early last year, so it’s hard to make a good comparison, other than the fact that he won the race by four-and-a-half seconds.

It’s unfair to say that Daryl Turner was inconsistent in the 100 backstroke when he lead off the medley relay in a 48.64 (48.4 the week before). His 49.1 came only 20 minutes after the relay in his individual. He has been quite consistent from the start and only looks to be getting better.

So the fact that he’s going way different times in the same meet…does that make him consistent or inconsistent?