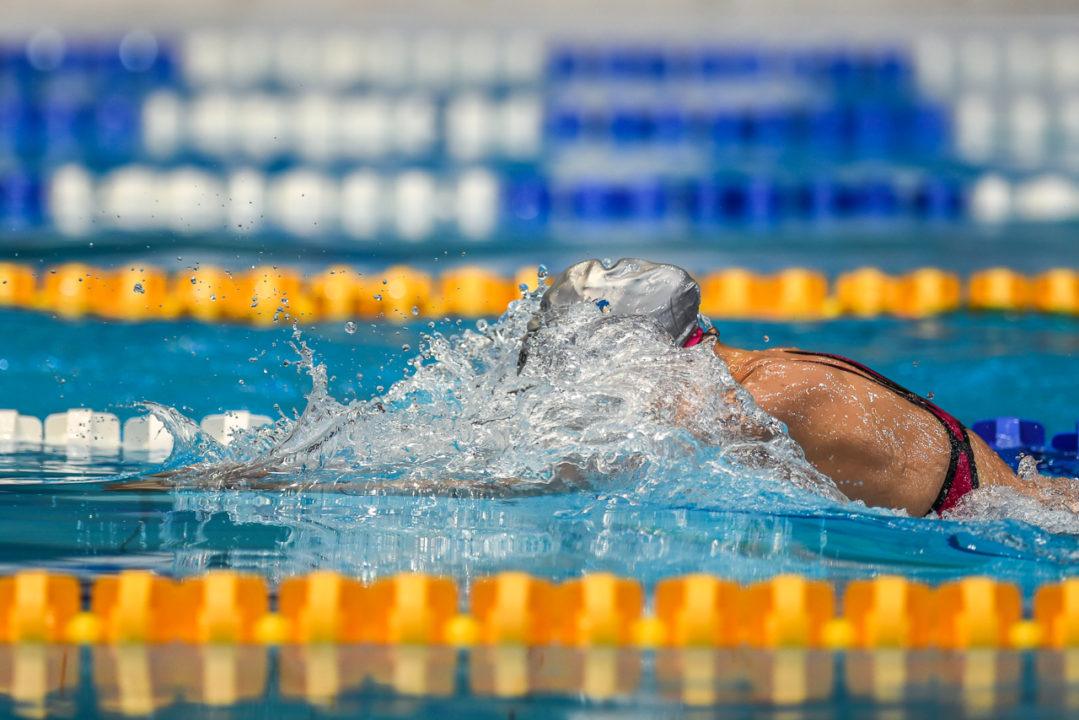 This morning’s prelims session gave us a taste of talent yet to be unleashed on the first night of the 2017 European Junior Championships, as youth from several different nations stepped up to make it into a semi-final or final swim. No World Junior Records fell just yet, but we did see a national senior record fall as well as a meet record bite the dust before all was said and done on night 1 in Netanya, Israel.

Irish breaststroking talent Mona McSharry put her nation’s 50m senior record on notice during prelims, when she cracked the Irish junior record with a new time of 31.14. That knocked .2 off of her own previous junior record, but set the wheels in motion for the 16-year-old to hack even more time off come the semi-final. In that round, the speedster clocked 30.91 to overtake the previous senior national record of 30.93 held by Fiona Doyle since the 2013 World Championships.

With McSharry’s gold medal victory tonight, the teen became the first Irish swimmer to have won gold at a European Junior Championships since recently retired Sycerika McMahon clinched a 50m breaststroke/400m freestyle golden combo back in 2011. McSharry will contest the 200m breaststroke tomorrow.

Serbia’s Anja Crevar successfully defended her European Junior Championship title in the women’s 400m IM event tonight improving up on her winning time from last year by just under half a second. Last year’s gold came to Crevar in a time of 4:41.54, while in Netanya tonight she managed to throw down 4:41.17 to win the event by about 2 seconds, having led wire-to-wire in the race.

Italy got on the board with 400m IM silver medalist Anna Pirovano, last year’s runner-up who was actually a tad slower tonight. 4:43.30 is what it took the Italian to get on the 2016 podium in the silver spot, while France’s Cyrielle Duhamel notched a time of 4:43.63 to round out the podium this time.

The only meet record to fall on the night came from Hungary’s Ajna Kesely, who overtook one of the oldest records on the books. Heidi Grein of West Berlin had held the championship record in the women’s 800m freestyle event since all the way back in 1986 but Kesely finally surpassed that 8:32.68 mark with her own speedy 8:31.81 for the win. Kesely repeats as champion having won this same event in 2016 in a time of 8:34.37.

The final medal-determining race for the women came in the 4x100m freestyle relay where Russia won out in a time of 3:42.22. That collective time was only .03 off of the meet record held by Russia since 2014. Notable splits came from Belgium’s lead-off swimmer, Valentine Dumont, who cracked the fastest lead-off in 55.56 to help her nation win bronze. Dutch Olympian Marrit Steenbergen fired off a flaming anchor of 53.37 to secure silver for the Netherlands in the race.

Hungary packed a two-pronged punch in the men’s 400m freestyle final tonight winning gold and bronze in the race. Topping the podium was Akos Kalmar, who led the field for the entire duration, ultimately touching in a time of 3:50.10. His outing tonight represents the 2nd fastest of his young career, having claimed a time of 3:50.03 this past May at the Hungarian Junior Championships.

Behind Kalmar was Russian Martin Malyutin who finished in 3:51.50 for silver. Malyutin battled Hungarian Balazs Hollo throughout the race in a bid for the runner-up designation, but Malyutin scorched a final 50m split of 27.70 to rip the silver slot from Hollo who settled for bronze in 3:51.79.

Turkey’s Uemitcan Gueres took the men’s 50m butterfly final, firing off a winning time of 23.72. At 18 years of age, Gueres produced a time tonight that falls just outside the world’s top 20 performances on the season. Right behind him only .14 away from gold was Hungary’s Kristof Grousset who finished in 23.86. That’s a marked improvement from last year’s 24.42 that garnered Milak a 7th place finish.

Finally, Maxime Grousset got on the board for France with a bronze medal-winning time of 23.88. In fact, the top 5 finishers all scored times under the 24 second barrier.

Poland managed to close out the meet with a solid gold in the men’s 4x100m freestyle relay. Earning a time of 3:17.11, they beat silver place finishers Hungary by less than half a second, while Russia earned bronze in 3:17.99 in the thrillingly close race. The top 3 teams in Netanya all beat last year’s wining time of 3:19.29 produced by Russia for gold.

Hungary’s Nandor Nemeth registered the only sub-49 second opening split of the field, clocking a 48.99 to give his nation a head start. But, Poland was loaded with a 48.88 anchor from Jakub Kraska that helped put them over the edge tonight and earn relay gold.

53.3! That’s fast. Looking forward to seeing what she’s got in the 100 free final tomorrow.