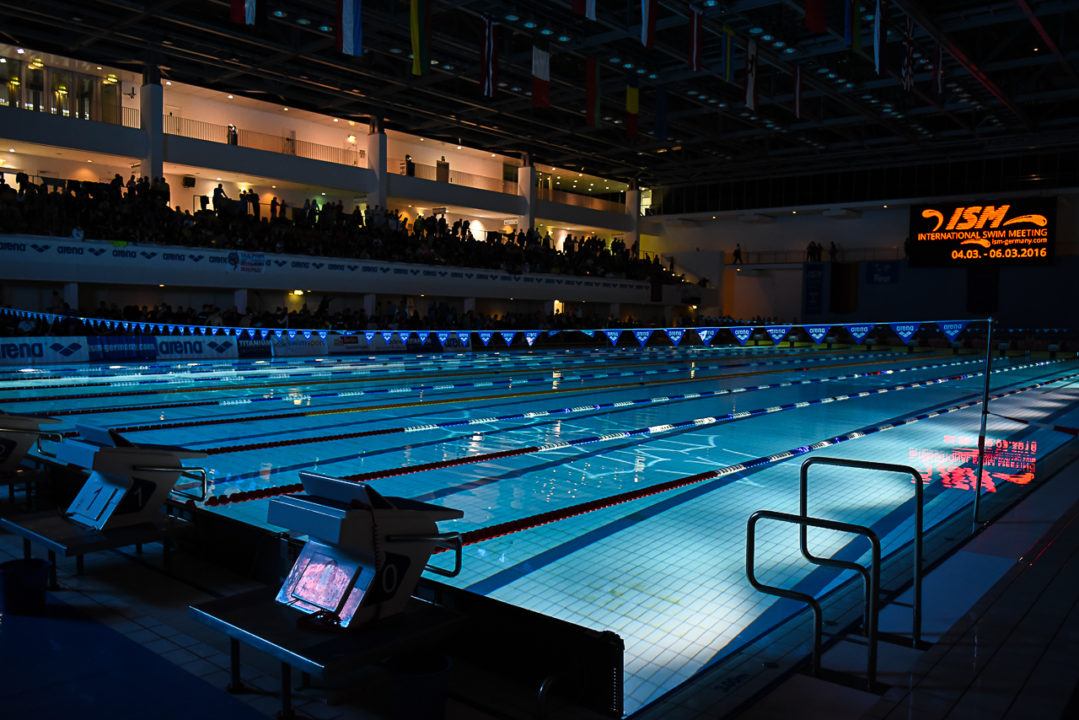 Junior World Records fell by the wayside on the final night of the European Junior Championships. Stock photo via Peter Sukenik/www.petersukenik.com

Rising Italian breaststroke star Nicolo Martinenghi finished off the European Junior Championships tonight with a bang, lowering his own Junior World Record to win the men’s 100 breaststroke in a time of 59.23. That was his third gold medal of the meet, as he adds to his win in the 50 breast and the mixed medley relay.

Winning silver behind Martinenghi was Russian Evgenii Somov in 1:01.09, and his Italian teammate Alessandro Pinzuti got to the podium as well with a bronze medal winning time of 1:01.28.

He wasn’t done, as the Italian men went onto win gold in the 400 medley relay, lowering the World & European Junior Records along with the meet record in a time of 3:35.24. Martinenghi led the way, splitting 58.93 on the breaststroke leg. After a 51.07 fly leg from Russia’s Egor Kuimov, the two teams were about even heading into the free leg. Davide Nardini did what he had to do for the Italians, splitting 48.90 to get them the win. Russia’s Ivan Girev made up 0.01 splitting 48.89, but it wasn’t quite enough as they won silver in 3:35.44.

The previous Junior World Record belonged to Russia (3:36.44) from the 2015 World Junior Championships, while both the European Junior and meet record are listed at 3:36.38 from Russia earlier in 2015.

The men’s 200 freestyle was another highlight from the final session, as Moldova’s Alexei Sancov lowered a Junior World Record of his own in a time of 1:47.00. The swim edges past the previous record of 1:47.10, which was set by American Maxime Rooney at the 2015 U.S. Nationals in San Antonio. Sancov also lowered his own Moldovan national record of 1:48.54 from the semi-finals.

Hungary’s Nandor Nemeth almost stole the race from Sancov, as he made up over four tenths on the Moldovan over the last 100 but ran out of room, taking 2nd in 1:47.14.

There were a few more records broken on the final night, including Russia’s Polina Egorova lowering both her own Championship Record and the European Junior Record (target time) in the women’s 100 back. Egorova clocked 59.62 to win gold, lowering her meet record of 1:00.24 set in the prelims, and the European Junior Record target time of 59.69. Her teammate Daria Vaskina made it a 1-2 sweep for Russia with silver in 1:00.90.

Prior to his performance in the medley relay Russia’s Kuimov followed suit in the men’s 100 fly, taking down his own European Junior Record of 51.97 and countryman Daniil Pakhomov‘s meet record of 52.13 from 2015. Kuimov won in 51.35, edging out Hungarian Kristof Milak who blew everyone away with his 200 fly performance earlier in the meet. Milak took silver in 51.49, and Estonian Kregor Zirk prevailed in a tight battle for bronze in 52.98.