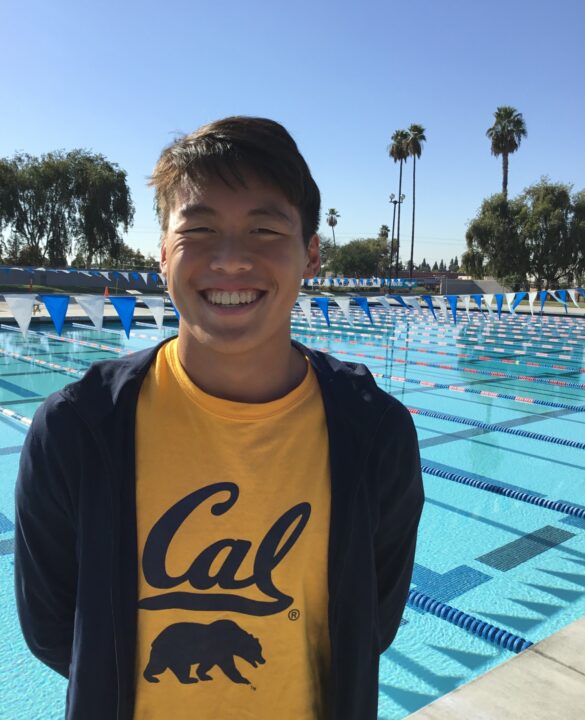 Back in September ranked the top members of the class of 2022 who had yet to make their college decision, with Matthew Chai sitting firmly in the 10th position. Almost three months later, he has now made his decision, opting to stay in the state of California and become a Cal Golden Bear. Chai currently lives in La Habra Heights, California where he swims for Fullerton Aquatic Sports Team and Diamon Bar High School.

Chai has already been off to a strong start this fall, posting lifetime best in numerous events at the Kevin B. Pery Senior Invitational. Chai had a huge meet, taking nearly six seconds off of his previous best in the 500 free while racing the #2 recruit in the class of 2023, Rex Maurer. Chai led for most of that race before Maurer out split him across the final 100. For Chai, his final time of 4:17.62 now ranks him as the fastest athlete in the event in the recruiting class of 2022. He also added a 19-second drop in 1000 free, touching in 8:55.79 to best Maurer by 12 seconds.

Chai will be a huge addition to the Golden Bear’s distance group when he arrives on campus next fall. During the 2020-21 season, Cal claimed the Pac-12 title before finishing as the runner-up in a tight battle with Texas at the NCAA Championships. Last season the team was led by a trio in of distance swimmers, Trenton Julian, Zachary Yeadon, and Sean Grieshop. With Yeadon already gone and the other two using their fifth year of eligibility this season, Chai will be a key part of a rebuilding distance group.

Joining Chai in the class of 202b will be Hank Rivers, Zachary Tan, and Tommy Roder.

Really? Always classy to insult a young person you don’t know. Troll your own family if you feel like bing rude.

Great news on a Monday morning! Congratulations, Mr. Chai and welcome to the greatest swimming team in the world.
I remember reading about your impressive time drops at the Perry Invite a few weeks ago. Looking forward to even more over the next 4 years. Go Bears!

You’re right – you caught me.
Greatest *collegiate* swimming team in the world.