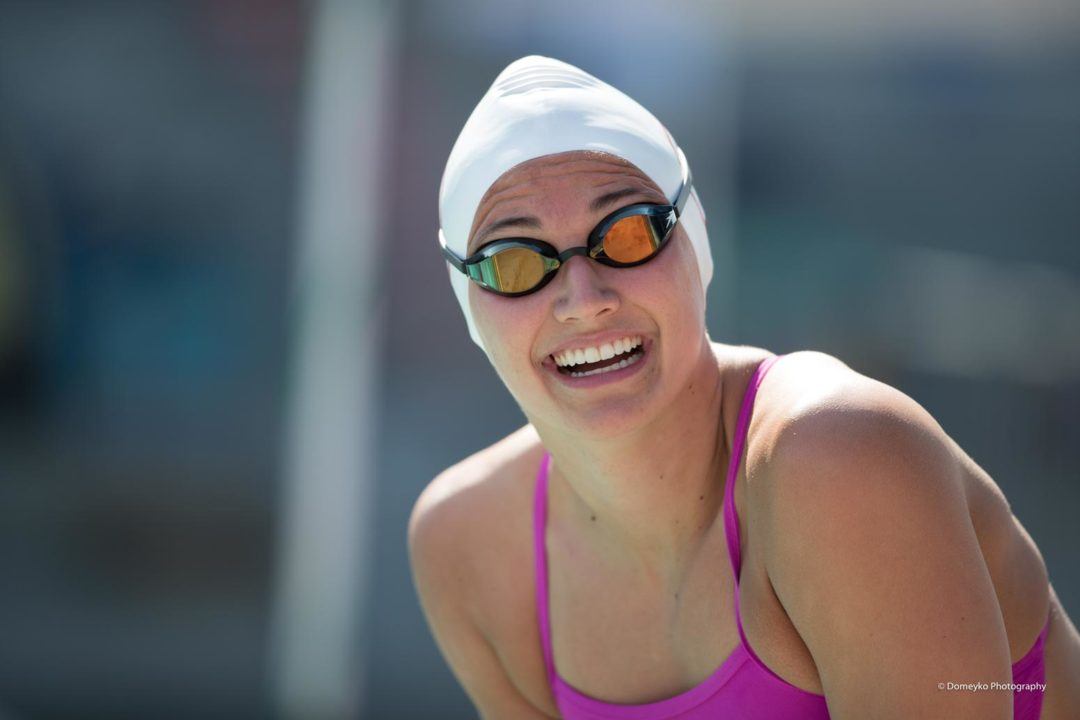 Kylie Masse looked strong in qualifying 1st for the women's 100 back final at Canadian Trials in 59.44. Archive photo via “Rafael/Domeyko Photography”

World record holder and reigning World Champion Kylie Masse swam her first race of the 2018 Canadian Pan Pac Trials this morning, cruising through the 100 back prelims in a time of 59.44 for the top seed. She currently sits atop the world rankings with her 58.54 from February, and has now been under a minute an incredible 35 times. She’ll look to crack 59 seconds for the 5th time this year tonight and book her ticket to the Pan Pacific Championships.

After Taylor Ruck opted not to swim the backstroke events at these Championships, Pointe-Claire’s Alexia Zevnik was one of those in the running to place 2nd to Masse, having gone 59.77 at the Canadian Championships last August. However, she elected to throw the race (going 1:11.42) in order to put all her focus on tonight’s 100 freestyle, where she’ll have a much better shot to make the Pan Pac team. All she has to do there is place in the top-4, while in the 100 back she would have to hit the FINA ‘A’ standard of 1:00.61 to automatically qualify (if we can all agree Masse is a lock to win).

With Zevnik out, Jade Hannah is the frontrunner for 2nd having been 59.62 at the 2017 World Juniors, but only qualified 6th this morning in 1:02.24. We’ll see what kind of form she’s in tonight.

She’ll receive challenges from Danielle Hanus and Ingrid Wilm, who have both been 1:00-mid and thus can hit that FINA ‘A’ standard, and then the #2 seed Madison Broad who was just off her best time this morning in 1:01.52.

In that 100 freestyle, Ruck, Kayla Sanchez and Rebecca Smith all scratched out after making the team last night in the 200, which really opened the door for Zevnik and others to make the team tonight in the 100. Zevnik qualified 1st in 55.43, followed closely by Penny Oleksiak (55.59), and 16-year-old Kyla Leibel dropped a tenth from her best time for 3rd in 55.85. Those three will likely be three of the qualifiers tonight, and the fourth spot is wide open between Sarah Fournier (56.35), Erika Seltenreich-Hodgson (56.35) and Maggie MacNeil (56.52), among others.

Meet format and criteria are making a farce of this meet. Going to be a lot of tourists being selected for Pan Pacs.

your comment is perfect, a short summary of the competition.

I agree completely. For so many of the top swimmers it’s just: make the team in one event, scratch a bunch of other events and let the remaining swimmers fight for wins in the thinned-out remaining events.

Join the discussion…Andrew Ford was right!