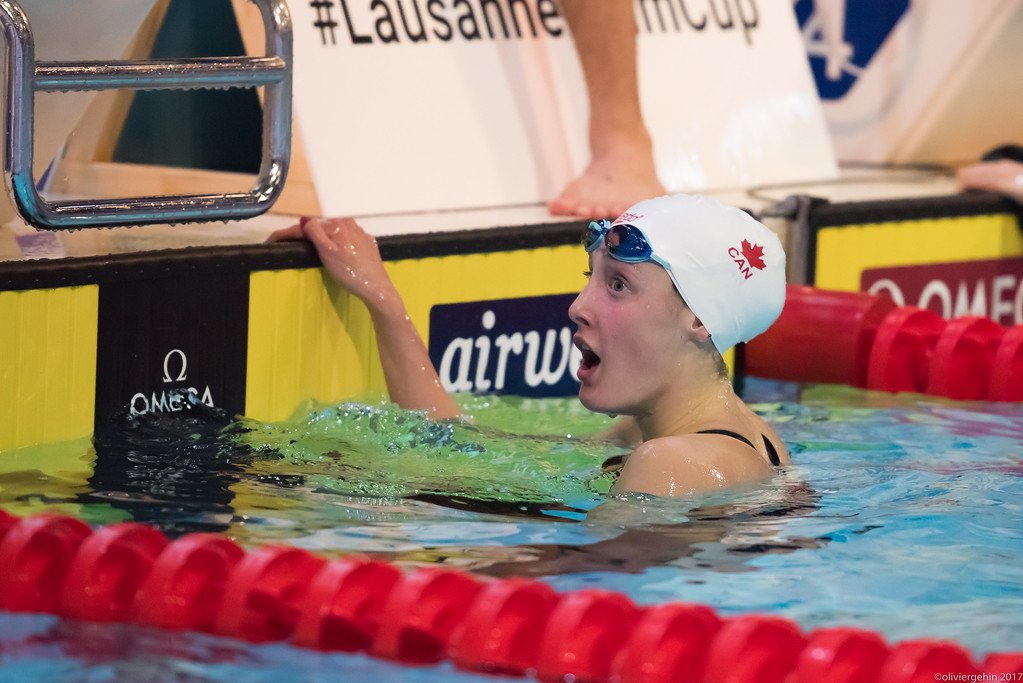 Taylor Ruck has scratched out of the 100 free on day 2 of Canadian Pan Pac Trials. Archive photo via Olivier Gehin

After qualifying for the Pan Pacific Championships last night in the 200 freestyle, High Performance Centre – Ontario athletes Taylor Ruck, Kayla Sanchez and Rebecca Smith have all scratched out of the 100 free on day 2 of the Canadian Trials in Edmonton.

Now that they’ve qualified for the meet, they can swim whatever event they want once there, so this move won’t effect their ability to compete in the individual 100 free or 400 free relay in Tokyo. It will give a few swimmers an additional chance to qualify for the Championships next month, with the top-4 out of the 100 qualifying for the relay. Ruck was coming as the top seed, while Sanchez was 4th and Smith 5th.

Penny Oleksiak, who formerly swam with HPC – Ontario but is back representing her home team Toronto Swim Club (while training in Florida), was the 4th member to qualify for Pan Pacs in that 200 freestyle last night, and remains in the 100 on day 2. However, she has dropped the 200 fly, where she was coming in as the top seed.

Another notable scratch on day 2 came from Kennedy Goss, who has dropped the 100 back after coming in seeded 6th.

This scratching of Ruck/Sanchez/Smith is a bit confusing to be honest. I get that they’re all qualified for the team now, but does that mean that the top 4 from tonight’s final in 100 free all make the team too? It wouldn’t make sense to bring a bunch of those swimmers to the meet when they aren’t in a position to contribute in any meaningful way (they aren’t swimming that close to FINA ‘A’ cuts, there are no relay prelims and they’ll obviously use Ruck and Sanchez, and possibly Smith as part of their 4×100 team anyway).

This could happen at USA Trials too. Katie might not swim 800 or 1500 for various reasons. Everyone is trying to work the system

I think for relay spots (100 and 200free) the swimmers should have to actually swim the event in order to qualify for the team, because if 3 of your top 5 (Ruck/Sanchez/Smith) don’t swim the event then essentially you are giving your 6th and 7th best options a spot on the team when they really don’t deserve to be there.

For individual events I think it works fine allowing scratches – because if you’ve qualified for an individual event, then you’ve already earned the right to be there and swim multiple individual events, and there isn’t the promise of 3rd, 4th place swimmers qualifying for the team necessarily.

There are no relay prelims this summer so someone who gets second might not actually be on the relay. Tough call for coaches….maybe a political statement?

Pan Pacs, like Pan Ams, is a development meet. It’s meant to be a proving ground for younger swimmers and a place for less experienced athletes to get a taste of what it’s like to swim at the bigger meets like the World Championships and the Olympics. So, the more athletes we can send to Pan Pacs, the better it’ll be for team spirit and competition for places on the way to Tokyo 2020. I think by scratching the 100 Free Ruck, Sanchez and Smith are doing their selfless bit to help out the team long term and let others enjoy a bit of the show.

Canadian swimming trials – Strategy Canadian swimming trials 2018!!!!
Im quite disappointed with the “not compete” decisions, the goal is to win to compete in pan pac, by winning a place to participate in teams in pan pac, they already decide “not to compete” because they can already be registered in 8 events and let win other swimmers who have no chance to go to pan pac.
filling a list of young swimmers to gain experience is a good idea,
why Canada swimming performs the trials, strategically removing swimmers from competition to choose who will attend pan pac? why spend thousands and thousands and thousands of dollars when they can choose them without trials.
wait for… Read more »

Is it’s saying “Program about to start” for everyone? Because yesterday mine started 20 Minutes late and missed all the 200 frees.

it just started for me! skipped the 100 free…

Ya, it hasn’t started on time either prelim session and missed the 200/100 frees, which is disappointing.

Here’s the live stream for prelims: http://www.cbc.ca/player/play/1280563267748
Easy to click the wrong one (finals) by accident on the linked site above.

Oleksiak is back home with Toronto Swim club? Did the gator thing not work out?

Meant more as in who she’s representing at these National meets, still training in Florida as far as I’m concerned.

I think they’re talking about her Canadian club affiliation. She wore a Gator cap last night in the 200 free.