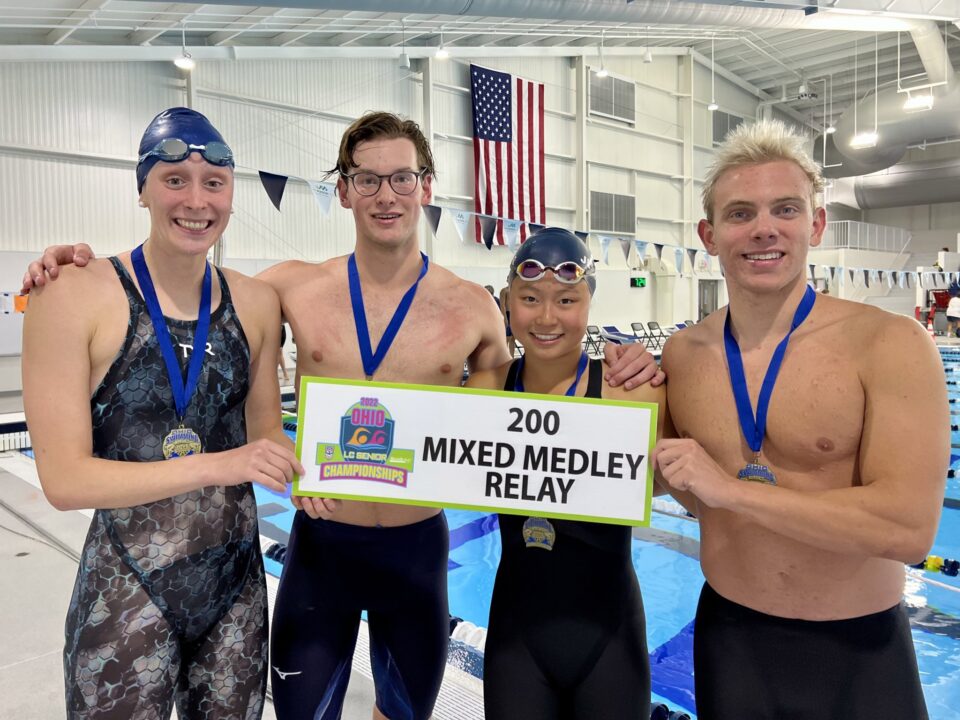 Bloebaum led off with a 26.42 backstroke leg, Li posted a 31.24 breaststroke split, Holmes went 25.36 on the butterfly leg, and Piersma’s 25.56 freestyle anchor completed a final time of 1:48.58. They reached the wall just shy of the 15-18 200-meter mixed medley relay record held also by their Mason Manta Rays club. The quartet of Adam Chaney, Jake Foster, Hannah Hill, and Cora Dupre combined for a 1:47.96 back in 2019 that still stands as the NAG record.

Holmes recently sent his verbal commitment to attend Duke next fall while Piersma is set to swim for Michigan starting this year. Holmes also placed first in the 800 free relay. Li, a 17-year-old Yale commit for this upcoming season, also took first place in the 100 breast (1:09.92), just off her personal best from April’s International Team Trials.

The Mason Manta Rays lowered the previous NAG record set by the Canton City Schools quartet of Hunter Armstrong, Jamyson Robb, Parker Timken, and Will Rose at the 2019 Lake Erie Senior Championships in Akron, Ohio. Armstrong opened with a 25.93 back split, Robb went 32.59 on breast, then Timken split 28.13 on fly before Rose closed with a 23.41 freestyle anchor to finish in 1:50.07. Bloebaum and Piersma didn’t quite match the splits of Armstrong and Rose, but Li and Holmes more than made up the difference during the middle two legs of the relay.

The previous NAG record before Canton City Schools was from 2017, a 1:50.91 by The Woodlands’ team of Ashley Pollok, Zach Hansen, Nolan Persyn, and Valerieanne Staffeldt.

USA Swimming began recognizing mixed relay NAG records in September 2018 after the inclusion of mixed relays at both the FINA World Championships and Olympics.

A lot of fast Ohio swimmers