Marsh And Bowman Discuss Their Roles As Head Olympic Coaches 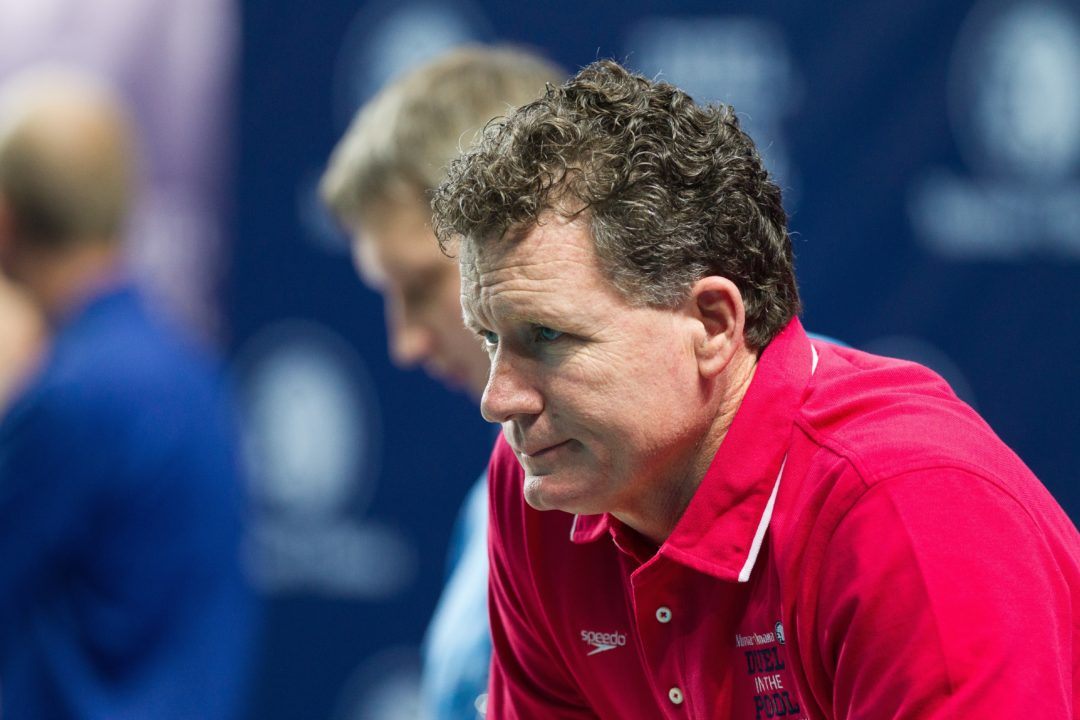 “Bob and David are two of the most dynamic, innovative and well-respected coaches in our sport." said USA National Team Director Frank Busch Archive photo via Tim Binning/TheSwimPictures.com

Earlier today, we broke the news that USA Swimming selected Bob Bowman and David Marsh have been named the head coaches of the men’s and women’s US Olympic Swim Teams. In a live webcast this afternoon, USA Swimming’s National Team Director Frank Busch introduced the two head coaches and they also sat down for an interview with Rowdy Gaines.

David Marsh had the first opportunity to talk and was able to thank people that have inspired him along the way. The one coach he mentioned specifically was Richard Quick. He expressed his confidence in the group they have assembled and said he is looking forward to the next year.

“If you see the U.S. team having fun, we’re going to swim fast, so let’s swim fast!”

“It is a profound honor and an exciting challenge to be named head coach for the women’s U.S. Olympic Team. The U.S. women’s team has great potential, and I’m sure all are working very hard right now to be their best in Omaha and in Rio,” Marsh said. “I will do all I can to uphold the unmatched tradition of excellence that has been established by the swimmers and coaches from the previous Olympic Games.”

Bob Bowman had the next opportunity to speak, and immediately thanked the people that allowed him to be in the position he is in. Everyone from his swimmers, to parents, and then specifically the other Olympic team coaches he has worked under, Mark Schubert, Gregg Troy, and Eddie Reese.

He said that he believes the strength of a country can be judged by the strengths of their relays, and now is the time to step up.

“The strength of USA swimming is the team environment, everyone is swimming for something bigger than themselves. As a staff, we are committed to making team USA the number one team at the Games, no matter what their role is. Everyone will contribute and everyone has to contribute if we are going to be successful.”

“It is an incredible honor to be asked to lead our Olympic Team and I am truly grateful for this opportunity,” Bowman said. “I take this responsibility very seriously and will strive to help each team member be at their very best in Rio. There is much work to do, but I am confident that Team USA will again represent our great nation in an exemplary fashion.”

Frank Busch also expressed his confidence in the two coaches they selected to lead the teams.

“Bob and David are two of the most dynamic, innovative and well-respected coaches in our sport. They’ve done amazing work with many of the world’s top swimmers and their international experience will be valuable as they guide our athletes in the lead-up to and at the Olympic Games,” Busch said. “I believe they’ll do a tremendous job preparing our team to succeed next summer in Rio.”