Louisville’s Kylliainen Marks 4:07 400 IM at SMU Classic: One of Several Nation-Leaders on Day 1 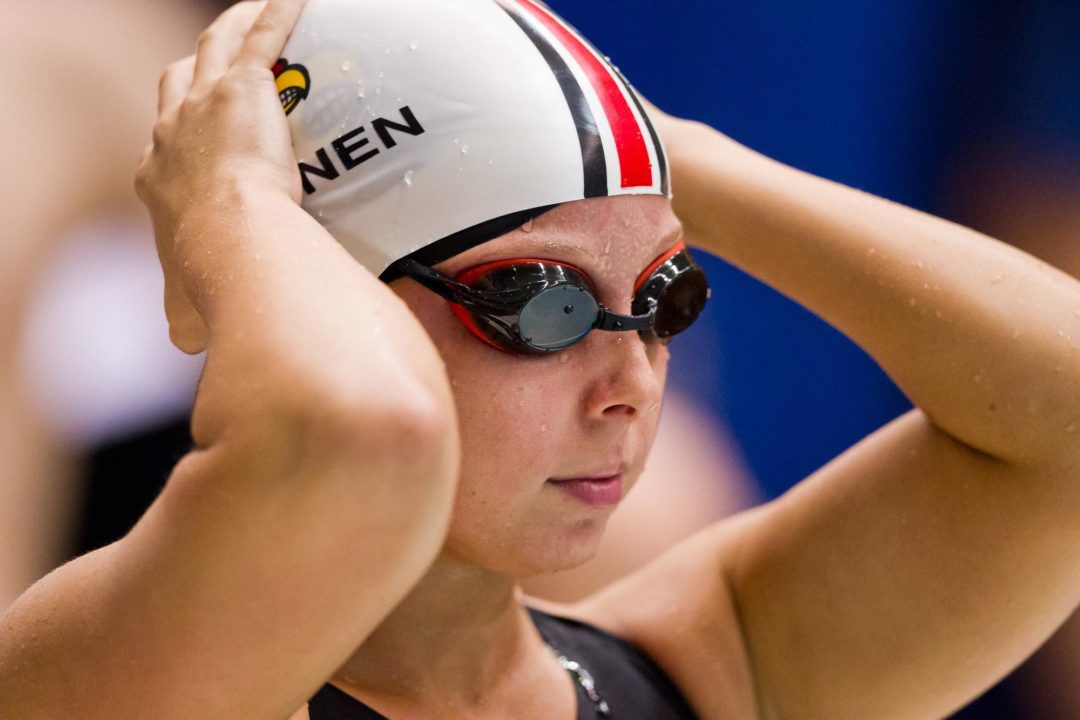 Day 1 of the SMU classic is the fastest session of racing we've seen thus far in the 2013-2014 season. Archive photo via Tim Binning/TheSwimPictures.com

The SMU Classic is always an exciting meet. Swum in the historic six-lane Perkins Natatorium the two day event brings in 6 teams, with each team assigning one swimmer to the A Final and one swimmer to the B final of each race in the two-day meet.

This year’s meet, however, is shaping up after day one to be perhaps the best we’ve seen in a long, long time in this series, with a ton of spectacular day 1 swims.

Scores at the halfway mark:

Both teams were loaded with impressive splits.

These two relays are shaping up to be two of the best in the country. For Indiana, Dalesandro’s split was already faster than her career best flat-start, and given the way Indiana trains early, I don’t know that anybody expected that kind of a time from her here. And of course, the Hoosiers now with Flederbach as their anchor have the most complete medley they’ve seen in years.

As for SMU, this team has a small nucleus of NCAA scorers, but that nucleus is very, very good. Nicol already broke a minute in her 100 breaststroke, and even though it was on a relay start, there’s a whole lot of teams in the country (not named Texas A&M) that would take that this early in the year.

For Indiana, that puts them under the NCAA’s optional relay qualifying time.

Louisville, who is without their top backstroker Krissie Brandenburg right now as she’s dealing with an injury, was 5th.

Though they finished low in that first relay, the Cardinals’ spirits were immediately turned around in the 400 IM by junior Tanja Kylliainen. Kylliainen swam a 4:07.57 to win the race, and swim the best time in the country by six seconds. That time was only three-tenths of a second away from her lifetime best, and it’s only October.

Kylliainen has been absolutely golden through the first month of Louisville’s competition schedule, and with this swim she becomes really dangerous. That’s because the Cardinals have no competition for the AAC team title, and that swim is one that will almost surely get an invite to NCAA’s, so head coach Arthur Albiero can now line her out however he wants to for NCAA’s. With how good she’s been already, she’s in the conversation for some NCAA titles.

There were great swims and great races all over the place at this meet. In the third event, the 200 free, USC freshman Chelsea Chenault won the A-Final in 1:47.61, just barely holding off Indiana distance star Lindsay Vrooman in 1:47.62. North Carolina’s Danielle Siverling was 3rd in 1:48.22, and SMU’s Nina Rangelova was 4th in 1:48.51.

Outswimming them all, though, was Indiana sophomore Haley Lips in the B Final in 1:46.08. North Carolina’s own sophomore Ally Hardesty, chasing Lips in that B final, had the second-best time overall of 1:47.48. Those teams know that their veterans will come around, but having such surprisingly strong swims from those young swimmers early is very encouraging.

The biggest surprise of those times came from Lincoln, who wasn’t as fast as she was here until the finals of the ACC Championships in the 2012-2013 season. North Carolina really needs that sprint presence.

Only four schools brought divers, and it was USC’s All-American (and platform NCAA Champion) Haley Ishimatsu that won the event in 304.90. Miami and Indiana were the two teams without divers, which nicked them in the scoring counts after day 1.

The fun didn’t stop after the diving break either, though. Louisville’s Kelsi Worrell was a 52.94 – faster than anybody in the country had been coming into Friday by a full second. For Worrell, who was 4th at NCAA’s last season, her summer didn’t go quite as well as we had hoped, but she’s still very young, and is showing that she’s far-from-done.

Indiana’s Dalesandro had another great butterfly swim with a 53.35 (her flat-start lifetime best) for 2nd, and North Carolina freshman Sarah Koucheki was 3rd in 53.38. Speaking of breakout meets – Koucheki’s previous career best was a 54.66. Woof.

USC’s Jasmine Tosky took 4th in that race in 53.98, and her teammate and fellow sophomore Kendyl Stewart won the B-Final in 53.48.

Indiana’s Pasloski followed up a very good medley relay swim with an even better flat-start. She matched her relay split with a 1:00.85 in the 100, which gave her the win. SMU’s Nicol was 2nd in 1:00.87, which was well ahead of the rest of the field, including the NCAA runner-up Carlson in 1:02.46 for 4th.

The session would end with the 800 free relay, where the Trojans picked up their third event win on the day. A group of Chelsea Chenault, Stina Gardell, Meghan Hawthorne, and Kasia Wilk combined for a 7:07.92, including a 1:46.0 lead-off from Chenault. That’s only six-tenths of a second shy of the NCAA automatic qualifying standard.

After one day, this is the fastest meet we’ve seen in the country so far this year. We certainly can’t wait to see what day 2 brings.

Great time for Tanja Kylliainen, but I don’t think she’s in the conversation for some NCAA titles.Too many stars to beat in her best events. Pelton, DiRado, Beisel and Margalis in the 200 IM. Beisel and DiRado in the 400 IM. Adams in the 200 fly.

I hope Jasmine Tosky will be back at her best this season.

And no trace of French Justine Ress in your recap. She’s a junior at Indiana.
No trace in the results too!
http://grfx.cstv.com/photos/schools/ind/sports/w-swim/auto_pdf/2013-14/box_score/stats_20131019aaa.pdf
Where is she?

bobo – this meet uses limited rosters. Each team can only bring 8 swimmers and 1 diver, so the coaches have to make some decisions on filling events and such.

Ok. Thank you for the news. I learn every day about college swimming.

Bobo – Tanja is the real deal. Check out the results from day 2 of the SMU Classic. Keep in mind it is only October and Tanja is already seconds faster than the stars you mention. You should watch her swim – her walls are amazing.

What you have to love about bobo is that if Tanja finishes in the top 1-2 at NCAA’s and beats some of those stars, he’ll be the first to give ‘props’ to those with whom he disagreed!

But man, that 200 fly was awesome on day 2, wasn’t it? If Cammile Adams has an off meet at NCAA’s, that might be Kylliainen’s race to win. Having virtually no conference competition to taper for could be an edge for Tanja.