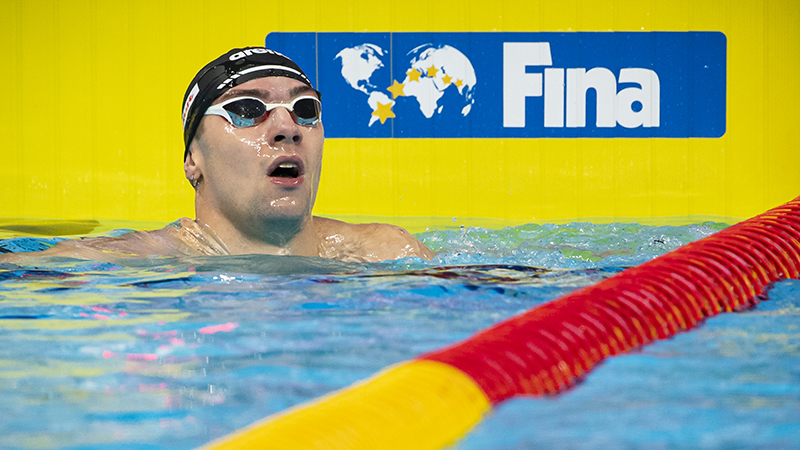 After negative-splitting his way to an Italian Record in the 200 back on Friday, Lorenzo Mora took out the 100 back record on Saturday. Archive photo via Giorgio Perottino / Deepbluemedia / Insidefoto

Lorenzo Mora broke his 2nd Italian Record in as many days on Saturday at the 48th annual Nico Sapio Trophy.

The 24-year old swam a 49.37 in Saturday’s evening session. That swim broke the Italian Record of 49.62 that was set two weeks ago at the Berlin stop of the World Cup tour. His previous personal best was a 49.93 done at the 2021 World Short Course Championships.

Mora now ranks 2nd in the world this year behind American Shaine Casas.

Ceccon is the new long course World Record holder in this event, breaking that record at June’s World Championship meet.

Mora broke the 200 backstroke record on Friday with a negative-split 1:48.72.

He was one of several record-setting swimmers at the meet, although the rest were meet records.

Among those was Simone Cerasuolo with a 25.78 in the 50 breaststroke. While not a national record, Cerasuolo’s swim did break the Meet Record in the event. It also ties him for 1st in the world with American Nic Fink.

“I’m happy,” Cerasuolo said after the race. “It’s a good starting point. Last season I grew a lot and I started this well too. I’m very strict with myself because I always try to push myself further.”

Like Mora above, Cerasuolo took advantage of the absence of a more accomplished countrymate to further his own star at this meet – Nicolo Martinenghi, Olympic bronze medalist, is Italy’s primary breaststroker.

Matteo Campi also set a new Meet Record with a 3:37.86 in the 400 free, a day after doing the same in the 200. That time ranks him 4th in the world this year (and was over two seconds better than what won the French championships nearby, for example).

The women’s side didn’t see any records, but good performances none-the-less. Silvia Scalia won the 50 backstroke in 26.55, better than she was in the World Cup in Berlin, and Costanza Cocconcelli wasn’t far behind in 26.77.

In the women’s 100 breaststroke, Lisa Angiolini got a confidence-boosting win over Martina Carraro with a 1:05.23. Carraro was 2nd in 1:05.66. That’s a new best time by three-tenths for Angiolini who, like Carraro did a few years back, is trying to get a second-wind to her career with a breakthrough in her late 20s (Angiolini is 27).