Looking Ahead to Tokyo for the Men’s 800 Freestyle Relay 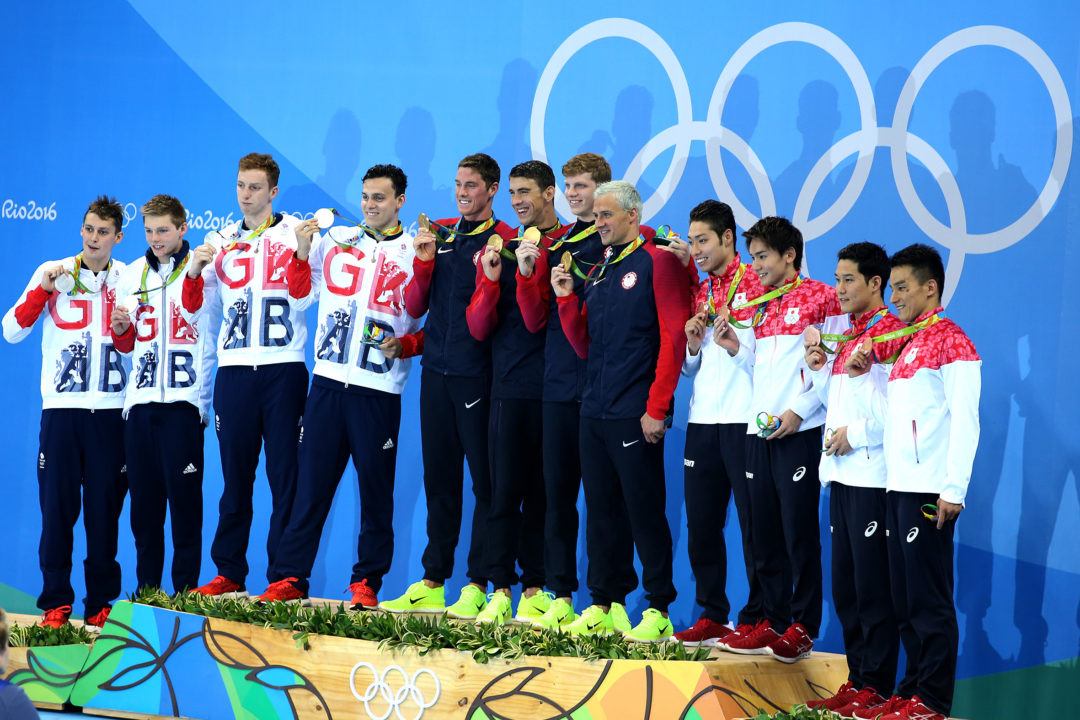 Looking ahead to the Tokyo Olympics, there appears to be a crowded field in the men's 800 freestyle relay, with no clear favorite for the gold. Archive photo via Simone Castrovillari

The 2016 Australian Olympian has decided to give herself time to recover before the fast-approaching Olympic Trials this June.

In just over a year, the Tokyo Olympic Games will commence. Although many of the races already have their early favorites, there is one relay on the men’s side that appears wide open: the 800m freestyle relay.

Since Rio, no country has repeated a global title in this relay. At the Rio Olympics, the Americans led the field by almost 2.5 seconds to win the gold. That team consisted of Conor Dwyer, Townley Haas, Ryan Lochte, and Michael Phelps. Both Phelps and Dwyer are retired, while Ryan Lochte has faced multiple suspensions since Rio. Haas seems like a likely candidate to be on the relay, given that he won silver at the World Championships in 2017 and swam a 1:43.78 on the 800 freestyle relay at Pan Pacs in 2018. However, he only finished 14th in the individual 200 freestyle at the 2019 World Championships.

The Americans have an interesting mix of youth and veteran talent in the 200 freestyle that could prove pivotal in the quest for the gold. In addition to Haas, Andrew Seliskar, Blake Peroni, and Zach Apple swam on the relay that earned the bronze in 2019. All three of them are looking for their first Olympic berth in this event after being pivotal pieces in both the NCAA and on Team USA for the past couple of years. Notably, Peroni broke the American record in the 200 yard freestyle in 2018, though it has been broken since then.

The man who broke that record, Dean Farris, is also a contender for this relay. Farris holds a best time of 1:46.39 from last summer’s National Championships, which ranks 6th among active Americans since 2016. Just ahead of Farris are Kieran Smith and Jack LeVant with times of 1:46.21 and 1:46.39, respectively. LeVant swam in the prelims of the relay in 2019 winning a bronze medal for his efforts. Smith has been on fire recently, smashing the 500 freestyle American record at the SEC championships, which puts him into a good position going forward. One of the youngest contenders and the 7th fastest American since 2016 is Luca Urlando. Although he is a medal contender in the 200 fly, he has great endurance and speed in the 200 freestyle, which may propel him to a relay spot.

The biggest question for the Americans is if superstar Caeleb Dressel is training for the 200 freestyle. Though it is not a part of his usual lineup, Dressel has swam the 200 several times over the course of the past year, posting a best time of 1:47.31 just before the lockdown started. However, given his versatility and speed, Dressel may be added to the relay by the coaches come Tokyo.

At the 2017 World Championships, Great Britain came out on top in this event with a team of Stephen Milne, Nicholas Grainger, Duncan Scott, and James Guy. Although they faded to a disappointing 5th place finish in 2019, they have shown that they have enough speed to put together a threatening relay. Scott and Guy have been staples for the nation in the 200 free, both producing times consistently in the 1:45 range. Guy, the 2015 world champion in the 200 free, owns a post-Rio best time of 1:45.18. Scott has a personal best of 1:44.91, which he earned at last year’s world championships where he finished third in the individual 200 free behind the now-suspended Sun Yang.

The main weakness that Great Britain has is finding solid contributors on the other two legs. At the 2019 World Championships, they had Tom Dean and Calum Jarvis swim their middle legs, both swam times between 1:46 and 1:47, but it will take more to win in Tokyo. However, Dean is only 20, and has shown rapid improvement in his 200 freestyle over the past couple of years, dropping from a 1:50-range down to a 1:46-range. In the limelight of his first Olympic Games, Dean may prove to be the boost the Brits need to win. He went a 1:46.0 on a flat start in March of 2020, right before swimming was shutdown for the global coronavirus pandemic.

The 2019 World Champions were Australia, who swam the fastest time out of any of the teams since Rio, 7:00.85. Despite not being a major factor in this relay in the past, the Australians have shown that they are definitely one of the top contenders for a medal come Tokyo. The team consisted of Clyde Lewis, Kyle Chalmers, Alexander Graham, and Mack Horton, who managed to finish almost a whole second ahead of the 2nd place Russians. Horton was the 400 freestyle silver medalist behind Yang in 2019, while Chalmers finished second to Dressel in the 100 freestyle. Lewis’ semi-finals time in the 200 free at the World Championships in 2019 was the best (legal) swim of any round, in spite of winding up 6th in the individual race, and he will be a top contender for the individual Olympic title in Tokyo. This is a fairly young, but experienced one. Chalmers and Lewis are only 21 and 22 respectively, but each have individual international medals to their names already. Horton and Graham, though 24 and 25, are still performing at a very high level and most likely will still have plenty in the tank for Tokyo.

Additional contenders include Italy, Russia, Japan, and China. The Italians are more known for their distance squad, but many of their top swimmers are beyond capable of throwing together a very quick 200 freestyle. At the 2019 World Championships, they finished just off of the podium, a slim .03 behind the Americans for fourth.

Russia won the silver medal in 2017 and 2019, with very similar squads both times. Their team has relied on the presence of Mikhail Dovgalyuk, Mikhail Vekovishchev, and Aleksandr Krasnykh. However, Russia is facing an Olympic ban due to a violation of anti-doping laws. Following the guidelines set forth in it, Russia may not be able to participate in the Olympics under a team, and any athletes found positive will also be banned. Although the implications for this relay remain unknown, the Russian team may be factored out before the games even begin.

Japan hasn’t performed as strongly in this event since their bronze medal in 2016, but they may be a threat in front of their home crowd. China isn’t in a very strong position to medal after the loss of Sun Yang. However, if his suspension is reduced (though highly unlikely), China may get the boost it needs to get on the podium. Both countries are known for producing out-of-nowhere swimmers from their youth contingents, who could rise to the challenge with the extra year, but that’s hard to quantifiy.

I think Jordan Sloan swims for the Republic of Ireland rather than Great Britain. Being from Northern Ireland he would have both as options.

I think you are right…..Ireland is the best choice here. 🙂

Re: the statement about Seliskar, Peroni, and Apple:

I think earning one’s first Olympic berth should be called an Olympic birth.

Peroni was on the Olympic team in 2016 for the heats of the 400 freestyle relay.

I believe he was trying to point out a spelling error. However, Olympic berth is commonly used instead of birth. Also, the article does state “in this event”, referring to the 200 free.

I think he might have been making a joke…

Amazing how many times that has to be pointed out on these boards.

I personally don’t see anybody but Australia winning. Winnington is the WJR holder and assuming he bounces back after a rough 2019 I think he’ll be 1:45 low. With King Kyle, Horton, and with Lewis who has been in the 1:44 range, I don’t see anyone beating them. Alex Graham has also split 1:45.05 I think.

I agree that they have to be considered the favorites. And, it does seem like Australia has generally improved their performance at big meets (though it’s worth noting the examples like Lewis, best time overall but no medal in the 200 free, meaning they’re not totally past them).

It’s weird to say, but the Americans really are the wildcards here. There’s so many U.S. guys who are ‘right there,’ on the verge of having the big swim, and so the key for them will be getting the right guys on the team and on the finals relay who hit their best swims at the right moment. With that many options, there will be temptations to make the wrong choices.

I agree, but wasn’t that Lewis’s first international major meet he swam the 200? He was primarily I.M. before that. I think that he has a lot of potential to improve.

Saying that , he has improved .

I think Lewis gets the benefit of the doubt given the way he swam that 1:44. He went out super fast and just held it, I think to his own surprise.

In the final he went out even faster trying to win it and blew up. It’s natural to try the same thing that worked so well the day before, I think most swimmers would probably do it in his position, but he’ll have learnt from that. I expect he’ll be 1:44 high/1:45 low in Tokyo (paced more evenly).

Remind me….what is Kyle King of? Do we crown someone as King after they win an individual gold at the Olympics? Just asking, because if that’s the case I need to start adding King or Queen as a salutation when referring to individual gold medalists.

You must be fun at parties

Good question. Take the 100 fly for instance. King Chad and King Kyle will fight it out while yet another King is crowned.

Are you related to the Mountbattens or the Windsor family?
#kingkyle

The Australian team from 2019 worlds was a lot stronger then I thought they were only 0.2 off the time the USA swam to win gold at Rio and that team had some big names in there. If winnington bounces back and chalmers and Lewis continue to improve Australia will put up a killer time at Tokyo

Australia is certainly powerful and, considering next year, I’d cite also the now 18 year-old Thomas Neill (already 1.47.5 last summer at 17 at Junior Worlds) among the valuable assets, but….1) when all’s said and done, what count in a relay, more than the POTENTIAL of every team, are their REAL performances. For instance: at last Worlds nobody would have bet on a 7.02.01 time for Italy (and was “only” fourth.., and GB fifth with a 7.02.04: what a race!), with four 1.45 splits, considering the PBs of Italian swimmers, but that happened indeed.
2) Talking about potential, I think that Great Britain has huge potential: Duncan Scott has already swum under 1.45, but his potential is higher, Guy… Read more »

Australia are the favourites, but I’d never write off the American’s and GBR have, in my opinion, the highest ceiling. I fully expect we’ll have three 1.44 legs in Scott, Guy and Dean come Tokyo. Who knows where Richards will be after his 1.47.2 aged 16 last summer – He looked to have improved again in December with 21/46/1.43 SCM swims in Canada. It’s the relay I’m most looking forward to!