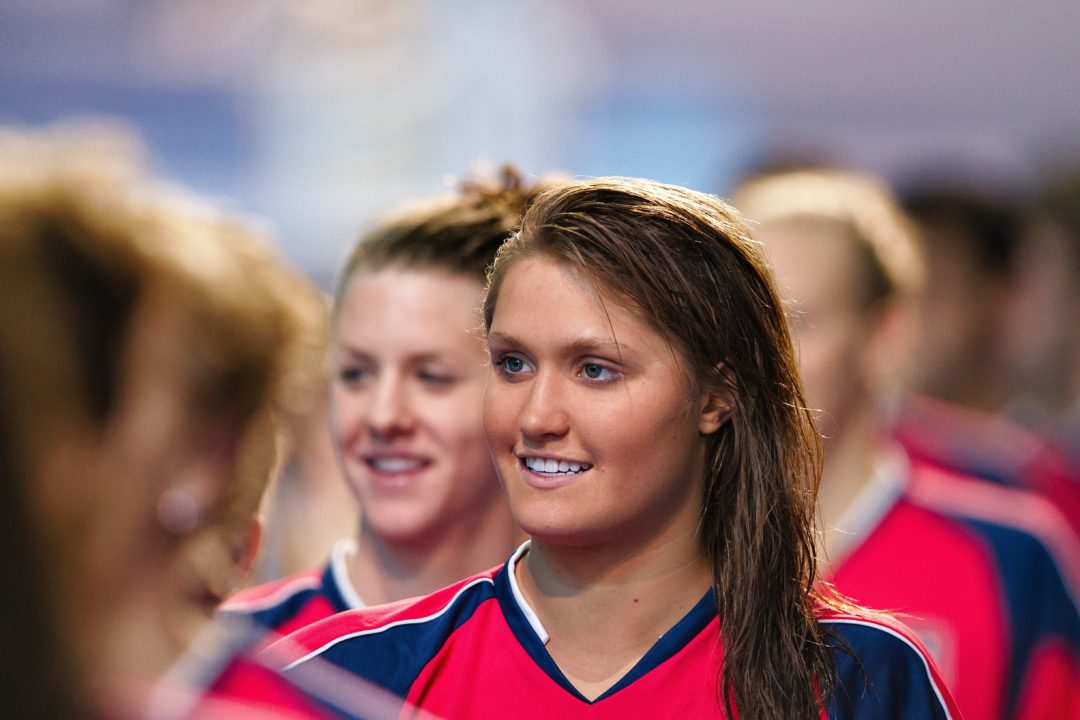 Despite battling off some sort of stomach bug that left her reeling on Friday, Cal freshman Liz Pelton fought back on...

Despite battling off some sort of stomach bug that left her reeling on Friday, Cal freshman Liz Pelton fought back on Saturday to break her own American Record in the 200 yard backstroke with a 1:48.39. That bested her own 1:48.90 from the Georgia Invitational in early December of this year.

Pelton still looks up at, though at this point it’s nearly eye-level, British swimmer Gemma Spofforth. Her 1:48.34 from the 2009 SEC Championships while competing for Florida is still the NCAA and U.S. Open Record. Pelton does now have 5 of the best 7 times in history, however.

You can see that most of the difference came on the first 150 yards, with Pelton pushing the pace much moreso than she did midseason. One would have to imagine that Spofforth’s mark, given how fast Pelton was under the circumstances, will go down at NCAA’s. Either by her alone or her and maybe someone like Elizabeth Beisel as well.

I presume her stomach goes better. Congrats to Miss Pelton. Not surprising based on her talent and her capacities especially in SCY. 1.47 at the NCAA championships. And next year with Missy and Elizabeth it could go in 1.46. The training sessions on backstroke at Cal next year with Missy, Miss Pelton, Miss Tran and Miss Bootsma will be incredible.

Just curious as to why we need to mention Missy Franklin in almost EVERY article, almost EVERY comment. Let’s concentrate on the present (Missy isn’t even in college yet!!) and congratulate Liz Pelton for a phenomenal comeback after battling a short, unfortunate illness. She so deserves this spotlight!!! Bravo Liz!! You are a Pac-12 champion in TWO events! You broke your OWN American Record! You almost smashed Spofforth’s World Record. You’ll do it next time!!! World Championships in Barcelona, here you come! : )

Congratulations to all of the CalBear swimmers this weekend!