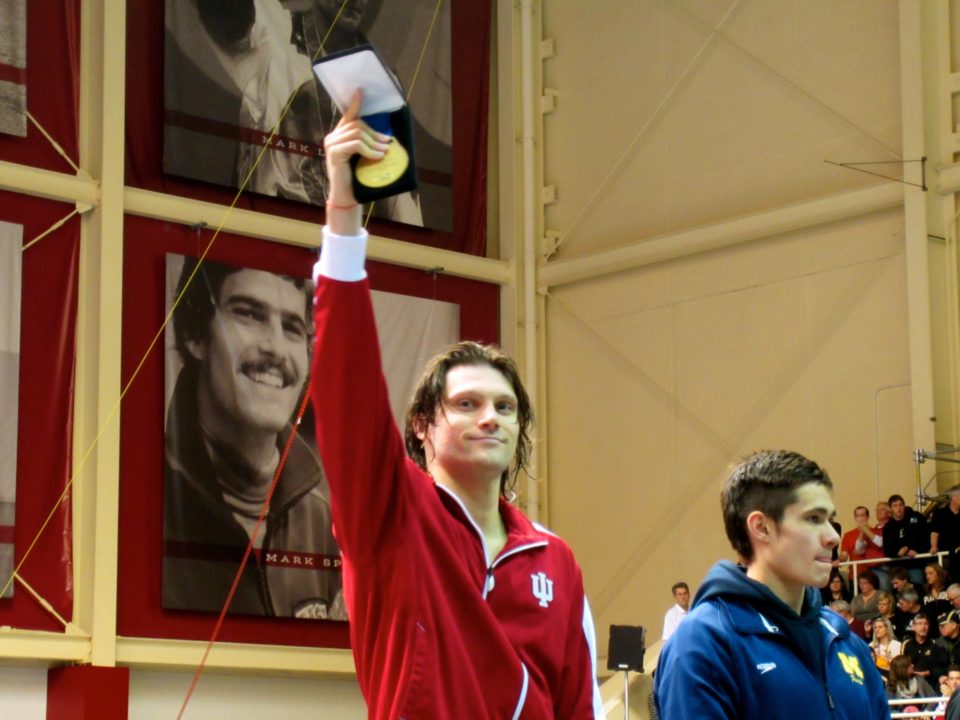 With Mr. Spitz looking on, Indiana's Cody Miller made history of his own as the 2013 Big Ten Swimmer of the Meet. (Photo Courtesy: Natalie Schumann)

As expected, the Michigan Wolverines won their third-straight B1G Swimming and Diving Championship, scoring 899 total points and winning 12 of the 18 events at the meet. The Wolverines are looking strong heading into NCAA’s, which will be held nearby in Indianapolis March 28-30. Indiana was second with 664 total points, and Ohio State was third with 470.

2012 Olympian Connor Jaeger led Michigan’s 1-2-3-4 sweep of the mile, clocking in at 14:34.87. His time was three tenths faster than his third place swim at 2012 NCAA’s (14:35.14), hinting at a big performance at the 2013 championship. That improvement is not all that surprising; despite his success both at NCAA’s and the Olympic level, he is still a relative novice to this longest freestyle distance.

Cody. Miller. The two time defending B1G champion added a third straight title to his streak, winning by over two seconds and setting new B1G, meet and pool records. His time of 1:51.03 is the second fastest in the NCAA right now, which means the pressure is on for Miller at this year’s NCAA championship meet. That swim would have been an NCAA record coming into this season, had Kevin Cordes not broken it already in December.

Michigan’s standout freshman Dylan Bosch claimed yet another B1G title for the Wolverines, breaking the B1G, meet and pool records with a 1:41.18. His time would have placed third at last year’s NCAA meet and was a second and a half faster than the 2012 B1G championship time. Bosch has proven to be a valuable asset to the Wolverines, placing second in the 200 IM and third in the 400 IM earlier in the meet.

That swim by Bosch is the second-fastest ever by a college freshman, behind the 1:40.94 that Cal’s Will Hamilton used to win NCAA’s last season.

Indiana took the top two spots and again demonstrated their B1G diving dominance. Conor Murphy, who averaged 10’s on his final dive, scored a 495.55 to place first, followed by senior teammate Casey Johnson (441.50). Purdue had a strong showing in the final, with Jamie Bissett in third, Sean Mokhtari in fifth and Nathan Cox in seventh.

A big thanks to Natalie Schumann and Jessica Campbell for covering the Big Ten Championships this week in Bloomington!