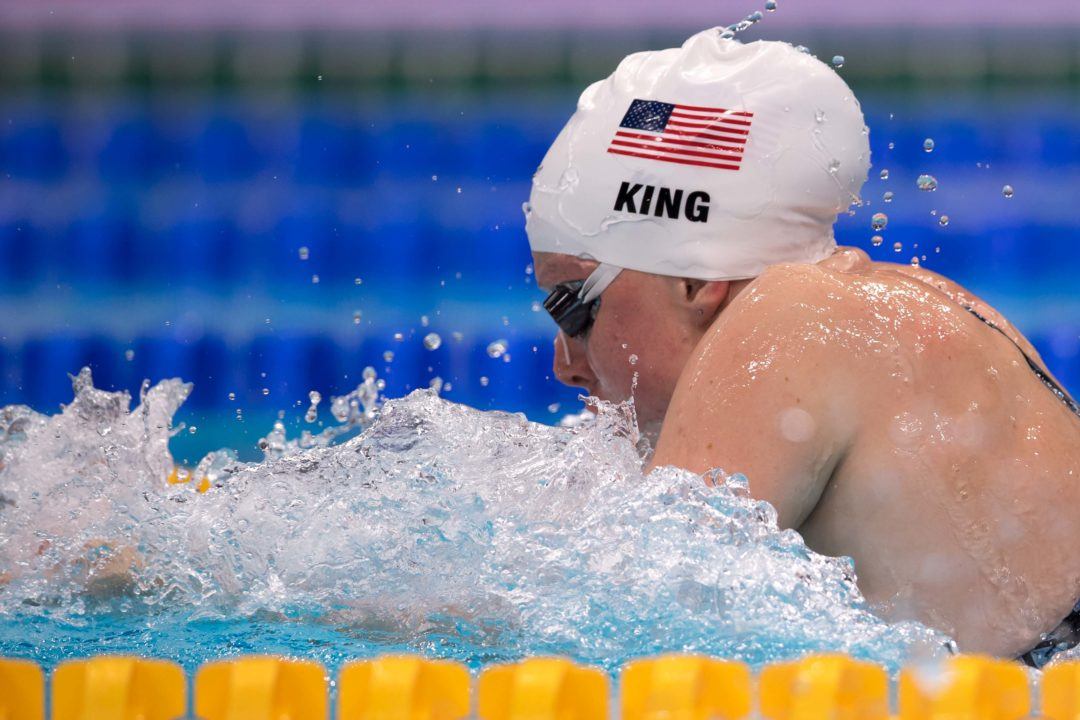 The highly anticipated showdown between Lilly King and Yuliya Efimova in the women’s 100 breast did not disappoint the crowd tonight. The USA’s King was out like a light, splitting 29.80 at the 50. Efimova is a great closer, so it was expected that she would gain some ground, but King surged through the 2nd 50 with the fastest back half of the field, splitting a 34.33 on the way home to clip the World Record with a 1:04.13. The former record stood at a 1:04.35 done by Ruta Meilutyte in 2012.

King had incredible opening speed, as her 29.80 split at the 50 tied Jessica Hardy for the 2nd fastest 50 breast ever done by an American. It was also the 5th fastest 50 breast in history worldwide. Before U.S. Nationals, where King put up a 29.66, Hardy’s 29.80 stood as the American Record.

Though she was just .01 shy of the World Record yesterday, Efimova wasn’t as fast tonight. She faded slightly at the finish, taking bronze in 1:05.05 while King’s teammate Katie Meili (1:05.03) out-touched her for silver. Former World Record holder Meilutyte of Lithuania wound up 4th in 1:05.65.

Not sure what happened to Efimova after almost setting the WR in the semis. Great race by King nonetheless!

Maybe King rattled her before the race?

Efimova had a terrible start

She had a typical efimova start

But she worked with Schoeman on that catapult start!

which makes it even more hilarious lol

Terrible start as always from Efimova but I think she was rattled when she saw the lead along had her on her and tightened up the back 50.

You mean other than being a two-time convicted, sanctioned and punished cheater? Your question answers itself: she is weak in mind, body and spirit: she has to cheat to win.

Forgot to up the dosage.

She used it all up on the semis.

Does anyone have a link to watch the race?

NBCSPORT.COM is showing the races live FYI. Check out the website for dates and times. That race was the beast for the USA!

Here you go! Watch Lilly stare down Efimova at 0:30 LOLOLOLOL

she is done with it

Major, major mistake for Effimova to do that and not being able to back it up when it counts. Now King is in her head for the 200 Br. The other competitors must also smell blood in the water.