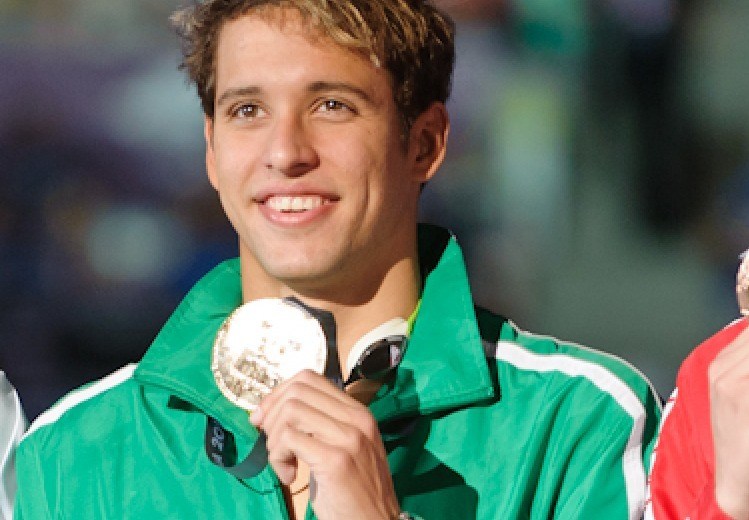 South Africa had a breakthrough with two swimmers qualifying for the Commonwealth Games in the 200 fly on the meet's first day. Current photo via Victor Puig

Maddy Banic will be joining Sarah Sjostrom in the women’s 50m fly skins for Energy Standard in its bid to stay on top here in Budapest.

Think you know your favorite ISL team inside and out? Ok, what’s their go-to hand symbol when walking out as a team in Budapest?

The 2014 South African National Championships began Monday in Durban. Hosted at the magnificent Kings Park Aquatic Centre, there isn’t expected to be any of the green-water shenanigans that marred last year’s meet.

The qualifying standards for the Commonwealth Games for South Africans is below. We’ll focus our recaps on finals unless something truly noteworthy happens in a semi-final, as there is not enough depth in the semi’s to warrant much consideration.

Qualifying times for the 2014 Commonwealth Games:

We’ll start with the last qualifying final of the day, which was perhaps the most anticipated of the entire meet. There, the defending World Champion and Olympic Champion Chad le Clos took his expected spot at the top of the charts in his best event, where he swam a 1:54.56.

He has actually been a touch faster this year, but now holds the world’s two fastest swims of 2014.

Equally anticipated, however, after last week’s American collegiate (NCAA) championship meet was who would take 2nd in the race, and who might join Le Clos this summer in Glasgow.

It turns out, that would be 20-year old Dylan Bosch, who was a 1:56.92 for 2nd place, just clearing the qualifying standard by a tenth of a second. Bosch, who was the NCAA Champion and is now the fastest 200 yard fly swimmer in history, is truly capable of better than this and even a medal at the Commonwealth Games, but with a tough travel and competition schedule over two-plus weeks, making the team here was a great goal.

He tipped off two other American-based swimmers: Sebastien Rousseau (Florida) who was a 1:58.73 for 3rd, and Michael Meyer (Arizona) who was a 1:59.67 for 4th. Those were the only four under two minutes in the event.

The men’s squad stands at three at the conclusion of the first day of competition, as 21-year old Myles Brown swam a 3:49.05 to win the men’s 400 free going-away. That’s only about six-tenths of a second shy of the mark that got him 6th at Worlds last year. This is his best event, and with a qualification underway, he should be able to really attack the 800 and 1500 freestyles later in the meet with an opportunity for really fast times (or really big crashes).

While it doesn’t look immediately like the South Africans will have much of a relay to send with her, but there’s some hope here for the future. 15-year old Marlies Ross took 2nd in 2:02.06, and 15-year old Erin Gallagher took 4th in 2:04.21. Both swimmers are funded through a new South African initiative to improve their women’s swimming, and that program after one year seems to be working thus far.

The South African National Record in the 800 free relay is just an 8:12, and between the three mentioned above, along with 3rd-place finisher Rene’ Warnes (who’s 22), they seem to have a group that could march down toward the 8-minute mark by the time the 2016 Olympics roll around. That would put the program in the territory of respectability.

The above-mentioned Ross, on her 2nd swim of the day, won the women’s 200 IM in 2:15.83 – her lifetime best by half-a-second. She had a huge gap between her first and second race, so it’s unlikely that the double will have affected her much, but expect by the time next year’s trials roll around for the South Africans to think about reshuffling their schedule on her behalf, to ensure that she’s got some rest to hit the standard in this 200 IM.

curious why all these nationals are occurring around the same time…yet the US trials/nationals are in July. This has probably been discussed in the past…and the success of the US certainly cannot be argued against…but I just find it interesting. Is it easier to get to that second taper? Is a later trials more predictive? Or is it simply timing–ncaas just finished, kids have finals, hs kids have state/sectional championships and exams (AP, SATs, etc)…perhaps July is just a better time to fit into the “American” schedule?

U.S. Nationals are actually the first week in August this year. Not sure why they do it so late, but like you said, hard to argue with the results at Worlds, Olympics, Pan Pacs, etc.

I think it’s part of swimming cultures in different countries. The US schedule makes maintaining a single taper easier than hitting two ‘peaks’ at different points in the season. From a young age swimmers in the US are swimming multiple meets and is seems like less emphasis is placed upon ‘Junior Nationals’ than in the UK. 9/10 young swimmers here will target junior nationals and swim their fastest times there whereas in the US, it seems like NAG records are broken all over the country every other weekend. Therefore, from a young age, young US swimmers are learning how to swim fast heavy legged, whereas in the UK, we see much more focused on ‘the big meet’ of the year,… Read more »

In USA clubs also do target State meets for 14&U and Sectionals for 14+, typically in March (for SCY) and July (for LC). 10 & U do not need to taper anyway; for 11-12 they “taper” them a week before but it only helps bigger kids with muscles – for that rest of them it is more mental – they think they are tapering. 13-14 taper more off course. Meets in between are meant to achieve state cuts. Not sure how this is different from what you have in the UK?

“Bosch, who was the NCAA Champion and is now the fastest 200 yard fly swimmer in history, is truly capable of better than this and even a medal at the Commonwealth Games,”

Or maybe Bosch is just very very good in SCY.
NCAA is full of swimmers who swam amazing SCY records, and yet are not as effective in LCM. Examples: Tom Shields, Simon Burnett, etc etc.

Right……we won’t know for sure until we see him in more LCM meets over the next year. Some people are just not LCM’ers. We’ll see.

I commented back on that proportionality calculation. Take a look and see what you think. It’s in one of the Australian posts.

I am sorry but I cannot find your post.

Hard to believe that Phelps was not that far off from this back when he was just FIFTEEN.
At 15 he had the world record in the 2 fly, at 1:54 high. Isn’t that just crazy when you think about it? What was that, 2001 I believe? Dang!