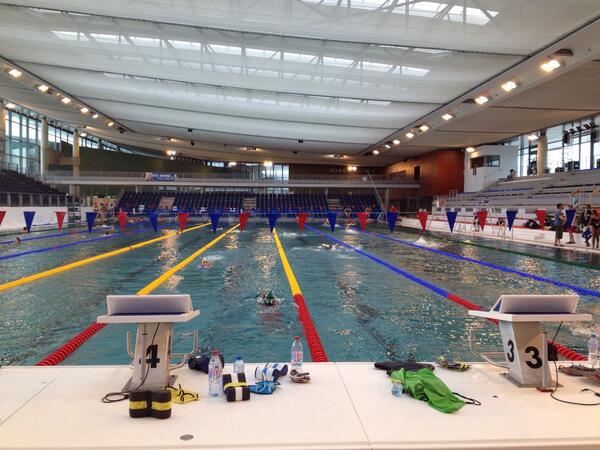 Quiet before the storm: the French national championships get underway tomorrow morning in Chartres, France. Among the top international stars who will be competing are Yannick Agnel, Camille Muffat, Florent Manaudou, Jérémy Stravius, and Camille Lacourt. Current photo via FFN on Twitter

The photo on the meet poster says it best: France’s top international stars, including two prodigal sons who have spent the last year training outside the Hexagon, are all reunited for the French National Long Course Championships in Chartres. From left to right you see the smiling faces of Jérémy Stravius (back, IM), Camille Muffat (mid-distance free), Yannick Agnel (mid-distance free), Florent Manaudou (sprints) and Camille Lacourt (back), all of who will be on deck to compete at their national meet from Tuesday, April 8 through Sunday, April 13, 2014.

Most countries do things a bit differently than we do in the U.S.: they hold their Trials at the end of the spring in order to select, then assemble their National Team for three months of training and preparation for the big international championship of the summer. In 2012 this April national meet served as France’s Olympic Trials; in 2013 it was the basis of selection for their World Championship team. The 2014 version will be used to determine the composition of four national traveling squads representing France in international competition this summer:

In 2012 and 2013 the selection criteria were much more stringent than this year. There were progressive time standards to achieve in prelims, semi-finals, and in finals in order to make France’s Olympic and World Championship squads.

This year the French Federation has lifted its foot from the gas pedal, so to speak. They will take the top four finishers in each event to Berlin, as long as they have achieved the minimal time standard in finals. This takes a lot of pressure off the top athletes who really won’t have to taper for another three months. (For that reason, don’t expect outrageous times out of this meet.) It also allows them to take on a couple of events they might not normally swim. Both middle-distance stars Agnel and Muffat, for example, have announced they will be competing in shorter distances: Angel in the men’s 100m free; Muffat in the women’s 50m free.

Romain Barnier during the press conference in Chartres, France, on the eve of the 2014 French National Long Course Championships. Photo from FFN on Facebook.

The other change the Federation made to this year’s meet was to combine the “Elite” level swimmers with two junior levels, so that everyone vying for a spot on one of France’s international teams would be competing under one roof. This allows French head coach Romain Barnier and his team to have a more global view of the present and future of French swimming.

But what does that mean, you ask? As of yesterday, that meant a total of 1,091 entrants in the meet this year vs 492 in 2013. (And you thought US Olympic Trials was a zoo…) It could have been worse: 471 youth met Chartres’ age-based time standards based on qualifying meets at the end of March; add to that the 709 French swimmers registered at the “Elite” level and the dozen-or-so foreign athletes invited to attend, and the meet organizers were actually expecting as many as 1,200 participants.

We know the names of the 1,091 but the psych sheets won’t be released until the end of the coaches’ meeting this afternoon. Stay tuned for the second half of this pre-game show… but in the meantime, here is how to follow: Championship Central

She took a break after Barcelona and trains seriously only since January.