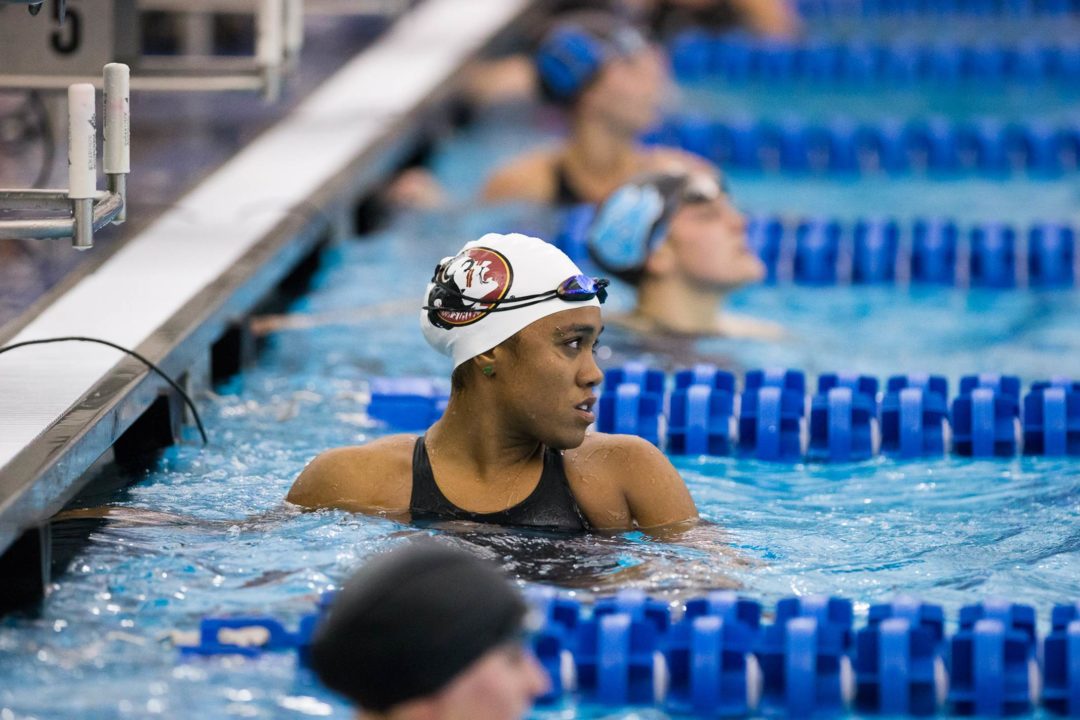 Florida State's Tiffany Oliver closed out her collegiate swimming career as one of three Seminole MVPs - but this won't be her last hurrah with the school. Archive photo via Tim Binning/TheSwimPictures.com

Florida State’s Tiffany Oliver closed out her collegiate swimming career as one of three Seminole MVPs – but this won’t be her last hurrah with the school.

Oliver was also accepted into law school at FSU, where she’ll continue her studies next year. She leaves the Seminole swimming program as a five-event school record-holder (50 and 100 free, 200, 400 and 800 free relays) and won back-to-back ACC titles in the 50 and 100 frees her final two seasons.

Sankovich had a brilliant senior season that garnered him ACC Swimmer of the Year honors. The Belarus native broke ACC records in all three of his individual races in the post-season, winning the 200 IM, 100 back and 100 fly. Sankovich also put up two top-8 finishes at NCAAs during the same session, finishing 2nd overall in the 100 fly and 8th in the 100 back.

Sophomore Jacobi was a breakout distance swimmer for the ‘Noles, breaking school records in the 500, 1000 and 1650 free. Those last two came in the same swim, the mile at ACCs where Jacobi wound up third overall, and she rebroke them at NCAA’s. She also anchored the school record-setting 800 free relay at the conference championships and has two more seasons of eligibility remaining.

A full list of team awards can be found here.

Jacobi actually reset the 1000 and 1650 school records at NCAAs where she was 9th.

Actually Tiffany also is part of the FSU record 200 Medley Relay, for a total of 6 records!
Tiffany was accepted to University of Miami Law and FSU Law, she choose the latter because of Environmental Law. We are so proud of her, not only an Athletic but also an Academic star.