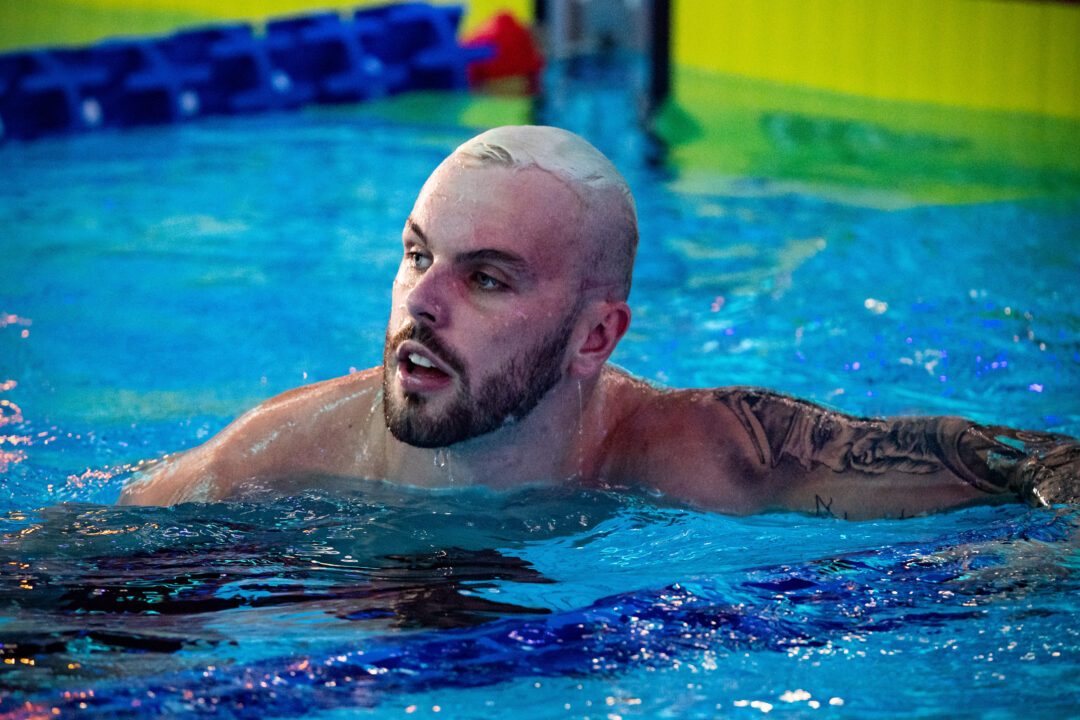 Australian Kyle Chalmers has revealed new abilities in the butterfly races this year, but he'll drop one of his two individual events at Worlds. Archive photo via Giorgio Scala / Deepbluemedia / Insidefoto

On Thursday, FINA released a set of startlists for all 8 days of the swimming portion of the 2022 World Aquatics Championships that begin on Saturday in Budapest.

While there will be more scratches (and no-shows) throughout the meet, these updated sheets are reflective of pre-meet scratches.

About half of the events on the schedule saw drops from somewhere within the ranks, but a few were more significant than others.

Notably, the Men’s 50 Fly saw drops from a pair of medal contenders in other events scratch: Hungarian Kristof Milak and Australian Kyle Chalmers.

Chalmers was the 10th seed coming into the race after a 23.21 at Australian Trials that surprised even himself to qualify for the team. The runner-up from Australian Trials William Yang (23.50) never entered the event at these World Championships, though with the FINA “A” cut set at 23.63, he was eligible. The 3rd-place finisher from those Trials Isaac Cooper was also under the FINA “A” cut in 23.53 and is also on Australia’s roster at this meet in other events.

Popstar Cody Simpson was 4th, but his time of 23.68 was not under the FINA “A” standard.

Chalmers is still entered in the 100 fly.

Milak, meanwhile, was buried much further down the rankings as the 27th seed. As the World Record holder in the 200 fly and the second-best performer in history in the 100 fly, we presume that he can be faster than his 23.50 seed time. His best from 2020 is 23.48, and in Tokyo at the Olympics, he opened his 100 fly in 23.65. But front-end speed is not the strength of his 100 fly, it’s his ability to hang on to that speed over the last 50 meters that makes him so good in the longer distances, so this 50 was never going to be his focus event in Budapest.

Other significant scratches include Italian Simona Quadarella in the women’s 400 free. The 23-year old Quadarella was the 2018, 2019, and 2020 (2021) European Champion in the 400 free, but her best time in the 2020s is about three seconds short of her best time of 4:03. She will instead focus on trying to defend her medals in the 800 (silver) and 1500 (gold) freestyles from the 2019 World Championships. In 2019, she won gold after World Record holder Katie Ledecky withdrew from the final with an illness.

In the men’s 200 backstroke, Xu Jiayu of China has dropped the 200 backstroke. While he is the defending Asian Games Champion in the event, he scratched from the semifinals at last year’s Olympic Games after ranking 15th in prelims.

South Africa, meanwhile, has dropped most of their relays after Pieter Coetze came down with COVID-19. The only relay entry remaining for them is the mixed 400 medley relay.

Below are the most notable scratches we found, including mostly scratches from the circle-seeded heats. This excludes other scratches that we have already reported on, like Duncan Scott, Alfonso Mestre, and Leonardo Diplano.

Maybe Chalmers will open the freestyle relay for a new WR!!

The prestige factor in 50M form stroke events is low. When major talents like Chalmers and Milak give them a miss you know they don’t belong in a World Championships.

I find it weird that a talent like Chalmers enters only ONE individual event at an Olympics and WCs?…

Those two had as much of a chance in the 50 fly as I did/do.

Ervin, is that you?

Just to clear this up, Kyle was selected for the 100m, the 50m was not a selection event, that’s why Kyle got the nod in the 100m because he finished second, The 50m was not a qualification event and Cody did not swim the qualifying time.

Facts and truth are too hard for some people to swallow.

Is Joaquin González Piñero out? Can’t find him in the heats of the medleys.

Yes he got covid

Who was the last the last athlete to so something like this?
This of the main reason that they won more then third of the medals nearly all the time at Olympic games or WC still today when more countries has top level swimmers then ever.

Not sure what you’re trying to say …

Did you have a stroke?

That 4 x 1 Med Mixed relay team for Aus is a mystery.
Id love to see them give it a miss.

What’s so mysterious about it?

Why is it a mystery? Same as Tokyo but replace McKeon with MOC or another freestyler. Shot at bronze but that’s probably it.

Even if they don’t put the A-team in, there’s no reason to scratch. May as well give some younger team members with light schedules a chance to swim on the world stage in the heats.