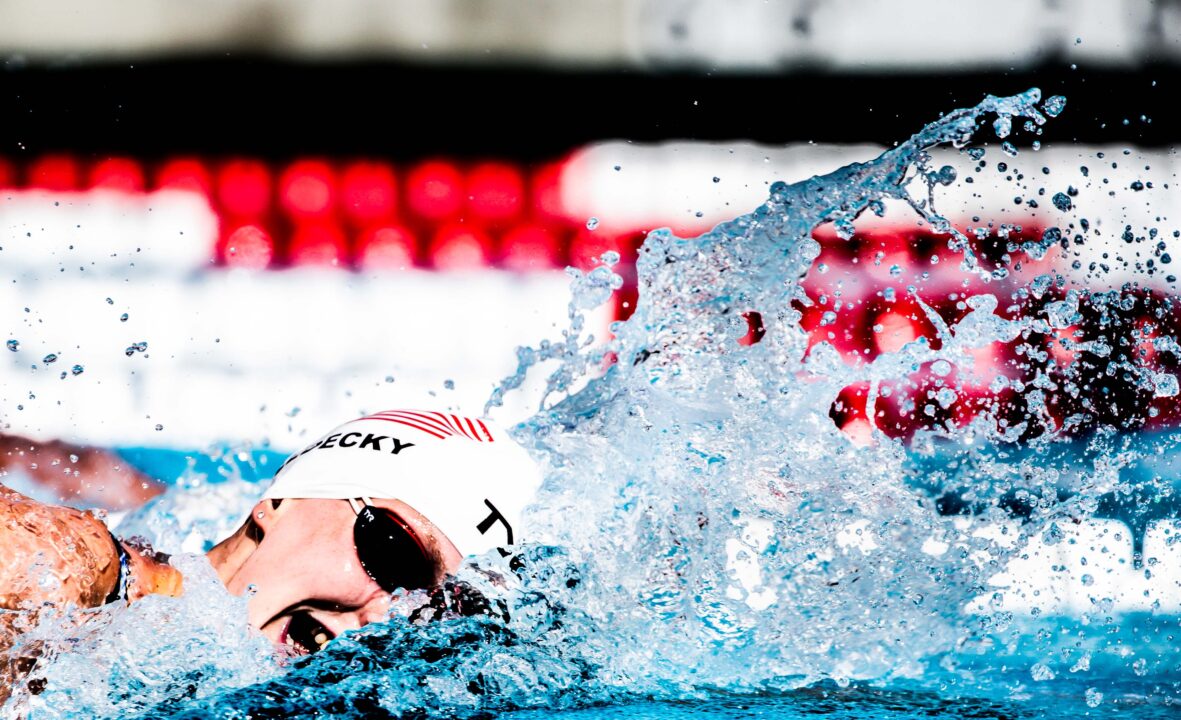 Katie Ledecky was the star of the show during the Thursday distance session at the 2022 Southern Zone South Sectional Championships, throwing down an 8:11.83 800 freestyle to take gold. That swim from Ledecky is the fastest she’s been in the event since 2019 and is quicker than the 8:12.57 she used to win Olympic gold at Tokyo 2020.

Notably, Ledecky negative split the race in Orlando, opening with a 4:05.98 and closing slightly faster with a 4:05.85.

Ledecky recently made the move to the University of Florida pro group from her long-time training base at Stanford University. That she’s been within a second of her Olympic gold-medal winning time twice this season and has now surpassed her Tokyo 2020 mark, indicates that the training in Florida is going well. Ledecky is training under Florida head coach Anthony Nesty and is among many fellow US Olympians including Caeleb Dressel, Natalie Hinds, Kieran Smith, and Bobby Finke.

Ledecky, Dressel, and Hinds are all racing this week at sectionals in Orlando, which runs from Thursday to Sunday.

Sarasota Sharks swimmer and University of Florida commit for the class of 2027 Michaela Mattes took second place in the event. Swimming the lane next to potential future training partner Ledecky, Mattes swam an 8:44.22, while Treasure Cost Aquatics swimmer and Wisconsin commit Blair Stoneburg produced an 8:48.70 for third place.

On the men’s side, Sarasota Sharks swimmer Liam Custer delivered a gold medal-winning time of 8:06.79 in the 800 freestyle, shaving a few seconds off his 8:09.69 PB from November 2020. Custer, a high school senior, will be heading to Stanford next season to begin his collegiate career with the Cardinals.

University of Florida freshman Aryan Nehra followed Custer with an 8:17.04, while Custer’s Sarasota Sharks teammate Amadeusz Knop was third in an 8:17.89.

Ngl, I’m a little nervous about Stanford swimmers. Ledecky left and now she’s faster than ever in season. Manuel couldn’t final at trials in her pet event (100 Free). Isabel Gormley (4:39 IM) went 4:50+ at trials. Their team has been off, they haven’t been fast, and at trials they really showed how their tapers weren’t working. I know this could all change by NC’s, but seeing what has happened to Ledecky and Manuel really indicated something.

I agree, it was obvious for two or three years before the last Olympics that Ledecky was going to have a very hard time in the 200 and 400 freestyle. Whatever it was they were doing at Stanford, wasn’t working. As I have no inside knowledge, I can’t put the blame fully on the stand for coaches. Perhaps Ledecky simply begin to wilt under the strain of professional training and completing her degree at a very challenging institution. It certainly has nothing at all to do with Ledecky’s work ethic, which may be the greatest in the history of our sport.

This totally makes sense for the Nesty distance training group. bobby Finke trains to be able to back half his races. Several others. It’s perhaps a BETTER mindset than just trying to hold a pace the whole way through and empty the tank at the end.

She is trying out different ways of pacing.

There must be a game plan behind it. She could be working on a stronger finishing kick so that Titmus can’t pass her.

They give out gold medals at a sectionals meet?

Meanwhile the boys were playing Fortnite…

That sounds like the way she used to swim. Makes me happy to see a negative split 8:11.

Orange and Blue looks good on you, Katie! 💪🏼🐊