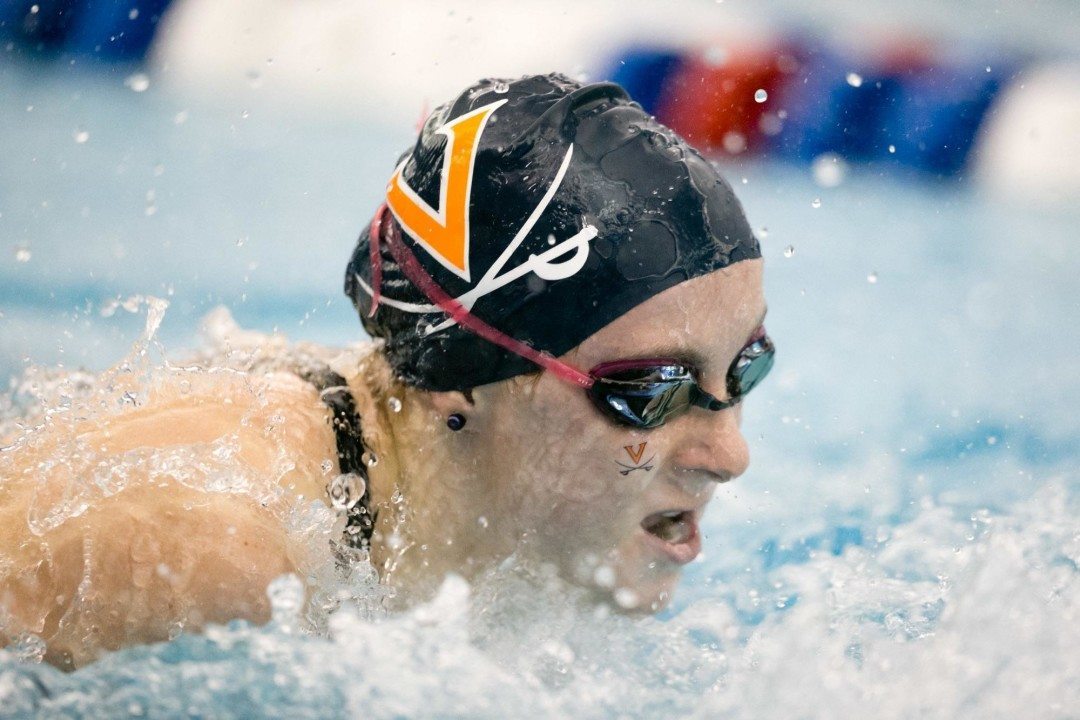 Virginia junior Kaitlyn Jones swam a 51.72 in prelims to break the UVA school record in the 100 fly on Saturday...

Virginia junior Kaitlyn Jones swam a 51.72 in prelims to break the UVA school record in the 100 fly on Saturday morning, but wouldn’t get the opportunity to improve that time in the evening session at the 2015 Georgia Invitational.

That’s because as the start of the evening session neared, Jones appeared on deck with a brace on her right, and later revealed that she had broken her hand in warmups. She wound up scratching the finals session of the event.

The University of Virginia media relations staff wouldn’t comment Sunday morning regarding the severity of the injury or how it would affect Jones’ training over the crucial holiday break, they would just say that she has an “upper extremity (injury)” and wouldn’t compete on Sunday.

Jones is a former National Age Group Record holder in the 200 IM, and qualified for NCAA’s last year both on Virginia’s relays and individually. In both the 400 and 800 free relays, she earned Honorable Mention All-America honors for her contributions.

Jones also swam a 1:55.11 in the 200 IM on Day 1 of the Georgia Invitational, which should also be good enough for NCAA qualifying and ranked her 3rd in the country at the time.

Cal senior Liz Pelton, who would be the pro-forma favorite at NCAA’s in the 200 IM, suffered a hand injury this summer as well; she missed 4-6 weeks after undergoing surgery.

I broke the capitate bone in my left hand 1990 at the Princeton Pool during an invite meet doing fly during warmup. Luckily I didn’t know it was broken until after the meet but it still hurt. Seems like a fairly uncommon injury though.

I am sorry but that’s just asking for more accident.. Very unfortunate for Jones, sorry to hear that! You’ll be back stronger!

It’s only helpful if the athletes swimming are familiar and comfortable with alternating right and left side lanes. Otherwise… Things get tangled quickly, and you’d be looking at concussions and head-to-head run-ins as well.