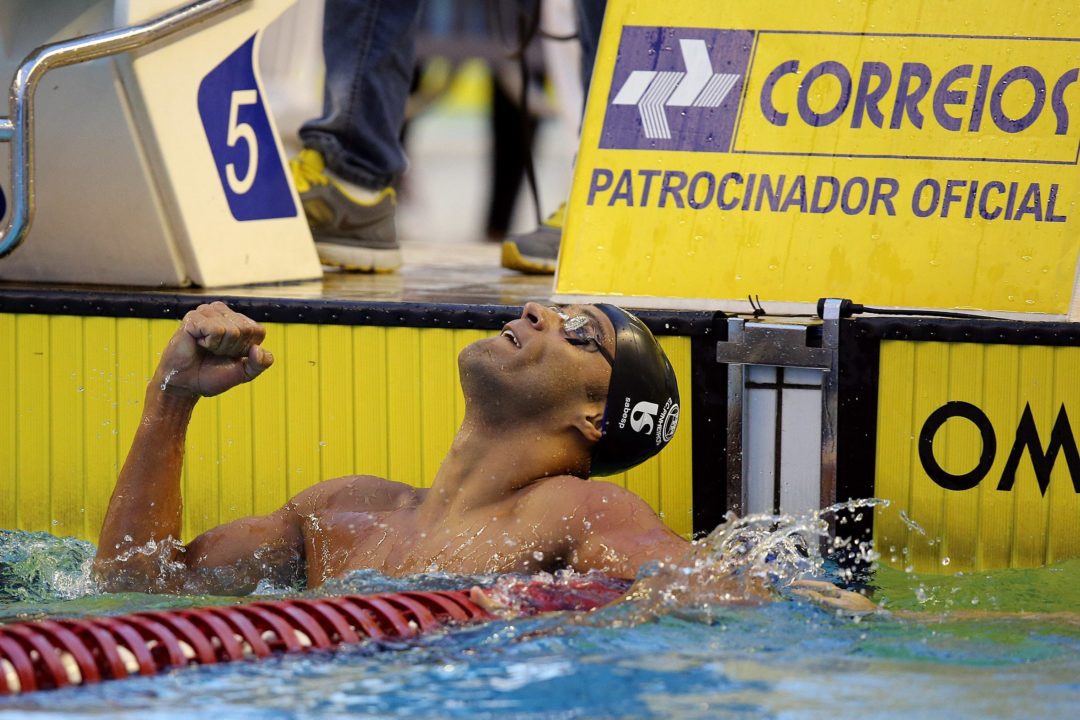 Thanks to D’Artagnan Dias for contributing to this report.

Day 4 of the 2013 Maria Lenk Trophy in Brazil, their National Championship meet, continued about as similarly as this meet has gone: a few qualifiers, but little in the way of true excitement, from the Brazilians at least.

Leonardo de Deus won the men’s 200 fly in 1:56.85, which just clears the FINA Automatic Qualifying time; Kaio Almeida, who was 17th at the Olympics in this race, took 2nd in 1:57.63, which was just off of the World Championship qualifying time.

Joanna Maranhao won the women’s race in a respectable 2:10.27.

But noticably absent from that final, and leading in part to the relative lack of depth in this race as compared to what we’ve seen in past years for Brazil, was Felipe Franca da Silva. He was only 9th out of prelims in 1:03.09, as he is recovering from what is reported to be appendix surgery.

The women’s 100 breast was won by Beatriz Travalon from Pinheiros in 1:09.32. Brazilian women’s breaststroking has never really been very good, and even that time is the fastest ever by a Brazilian woman in textile.

Etiene Medeiros, who is taking over the backstroke mantle from the recently-retired Fabiola Molina, broke the Championship Record twice in the 50 back on Thursday. That ended at 27.88 in finals for the win, which left her .04 short of Worlds qualifying.

Juan Pereyra, an Argentine, won his 2nd men’s distance title of the meet in the 800 free with a 7:59.47. Because he is a registered member of Minas Tenis, he is eligible to win titles, as compared to his countrymate Martin Naidich, who is not registered with a Brazilian Club. Still, Naidich will walk away with the best times over his much-more storied teammate in both events, including a 2nd American Record. He swam a 7:57.60 in an observed swim, which knocks eight-tenths off of Pereyra’s record from this meet last year.

16-year old Brandonn Almeida, who is having the best meet of the whole junior contingent, posted nearly a 20-second drop to go an 8:13.97 in this race.

She Will swim the 50 back even without hitting that absurd time because she already got A standard on 100 back..

And Want to see how well de Lucca and Chiereguinni will go on the 100..