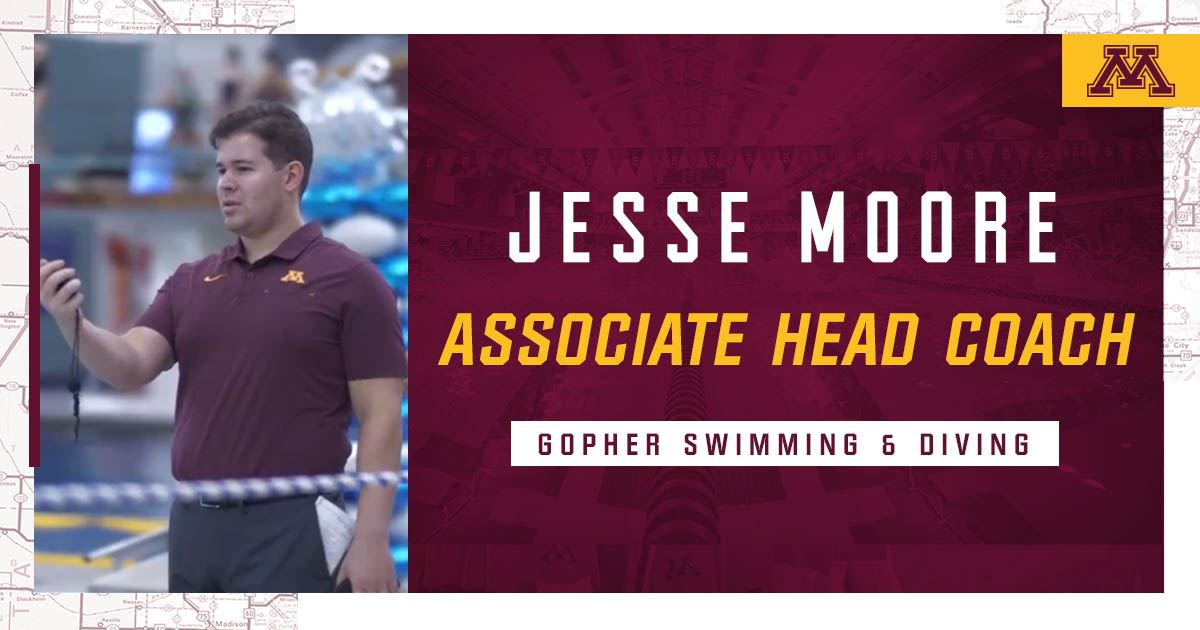 Moore formerly held the title of assistant coach since being hired in July of 2018. Current photo via Minnesota Athletics

MINNEAPOLIS – University of Minnesota swimming & diving head coach Kelly Kremer announced Tuesday the promotion of Jesse Moore to the role of associate head coach for the men’s and women’s swimming and diving programs. Moore formerly held the title of assistant coach since being hired in July of 2018.

“Jesse has not only done what has been asked of him, but has continued to demonstrate he is going to do whatever it takes for our program to be successful,” said Kremer. “He is coming off a great year of development, has proven himself to be among the best recruiters in the country and he will be given his own training group this fall. This is a promotion that he has earned and I am looking forward to working with Jesse for years to come.”

In his first two seasons with the Maroon and Gold, Moore has already added irreplaceable value to the Gophers’ program with his expertise in recruiting and building authentic relationships with student athletes.

“I am so excited and grateful for this opportunity to serve the University of Minnesota and its student-athletes in this new capacity,” said Moore. “UMN is an amazing place to work: our student-athletes and staff are the best because of the culture put in place by our athletic director, Mark Coyle. I would like to thank Mark, [sport administrator] Marc Ryan, Kelly Kremer and Terry Ganley for this honor and opportunity. Kelly and Terry are such amazing mentors to me and I cannot thank them enough.”

Just this past year, Moore helped attract a top-16 ranked recruiting class in the nation to Minnesota on the women’s side. Moore and company followed that feat up with arguably an ever stronger class entering the 2020-21 season, one Kremer has referred to as possibly “the best group that we’ve ever brought in.”

Said Kremer of Moore’s strength as a recruiter: “At one time, I had a reputation of being a very good recruiter, and Jesse Moore is certainly better than I ever was. I’m so impressed with how well he connects with people, and his passion and love for Minnesota comes through when he talks. It’s genuine.”

In 2018-19, Moore’s first year on staff, both the Gopher men and women finished within the top-20 at the NCAA Championships. The men turned in a 19th place result, while the women sent 10 student-athletes to the event and placed 11th in the nation.

On top of his accomplishments during his short time at the U, Moore has added a wealth of experience to the staff stemming from multi-year stints at both Northwestern and Duke. Moore played a vital role in the success of both programs while on staff, with Northwestern turning in a pair of top-22 NCAA finishes in 2017-18 and Duke achieving three consecutive top-15 recruiting classes from 2018-2020.

Now with an elevated role at Minnesota, Moore will look to build upon the groundwork he has laid alongside the remainder of the coaching staff throughout the previous two seasons.

“I’m proud to be a Gopher and to live and work at a university that feels like home,” said Moore. “Go Gophers!”

Much deserved from a good coach and even better person. Watch out for Minnesota!!!!

Jesse is the BOMB.com 💣