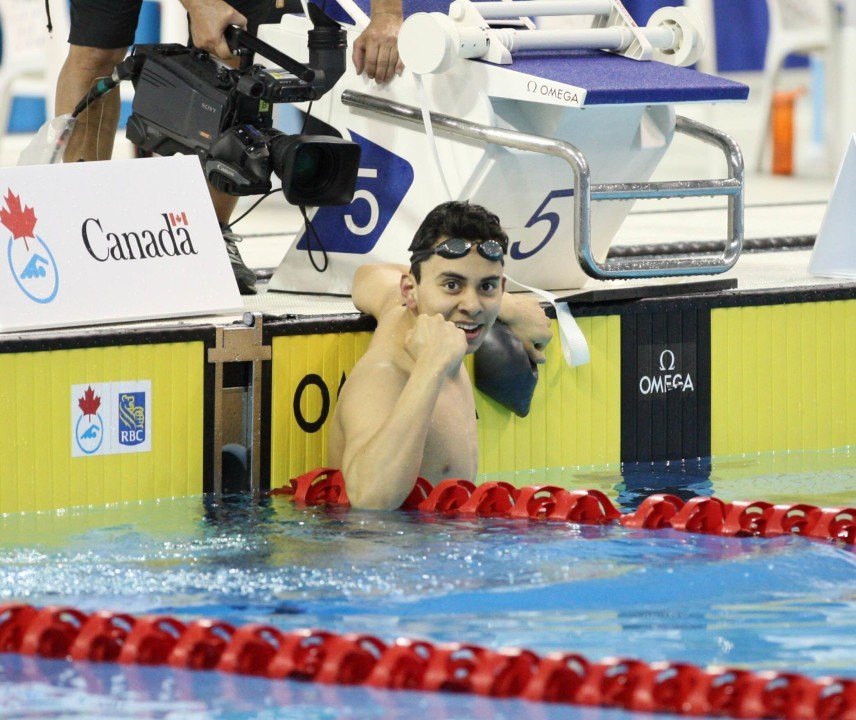 As if qualifying for the Olympic team wasn't enough, Javier Acevedo broke the junior world record in the 100m backstroke en route to his first place finish. Current photo via Chris Tanouye/www.christanouye.com

As if qualifying for the Olympic team wasn’t enough, Javier Acevedo broke the junior world record in the 100m backstroke en route to his first place finish.

Although Acevedo’s time is the world junior record, the fastest time ever recorded by a male swimmer in that age range was a 53.38 by Ryan Murphy when he was 17. Murphy recorded that swim before FINA began recording age group records.

Acevedo’s new junior world record dipped under the FINA ‘A’ qualifying time, securing his spot on the Canadian squad for the Olympics in Rio this summer.

Entering the meet with a 55.24 seed time, Acevedo took an incredible 1.57-seconds off his personal best time in order to take down defending national champion Russell Wood.

Acevedo was also just three one-hundredths shy of Pascal Wollach’s 53.63 Canadian record that he set back in 2009 in the super-suit era.

Acevedo will also be competing in the 100m freestyle, 200m backstroke, and the 200m IM to conclude this competition before hopping in the pool to begin his Olympic preparation.

These young Canadians have huge time drops this year.
After Oleksiak here comes Acevedo. Who saw that coming?

Looks like Canadian swimming finally wakes up. We saw the first signs last year.
Same for Canadian track and field by the way.
I’ve always wondered why Canada is so weak at each summer olympic games with such a big population and such a sporting tradition. 37th in the medal table at 2012 olympic games with only only 1 gold medal and only 18 medals overall!
Its neighbor USA was first with 46 gold medals and 102 medals overall!

1/10 of US population, and a sporting culture generally around winter sports. Canada’s swimming performance is probably more a cyclical thing, I’m sure that the performance director would disagree though, but the reality is he hasn’t changed much, only the qualification process.

Not too mention, Canada always looks back at the glory days of the 80s and says how do we get back to that. Maybe we were better back then, but it’s also a lot more competitive now.

Wow! I really thought there were around 150 million people in Canada! 😆
The country is so large on a map!
I believe I’ve confused with Mexico!
I need to review my geography.

I know winter sports are much more important in Canada.
But you can recognize with me that the London performance even for a country of 35 million people was very weak. Especially in terms of gold medals
I’m pretty sure you will do much better in Rio.