Italy’s Vergani Receives 3-Month Suspension, But May Yet Compete At Worlds 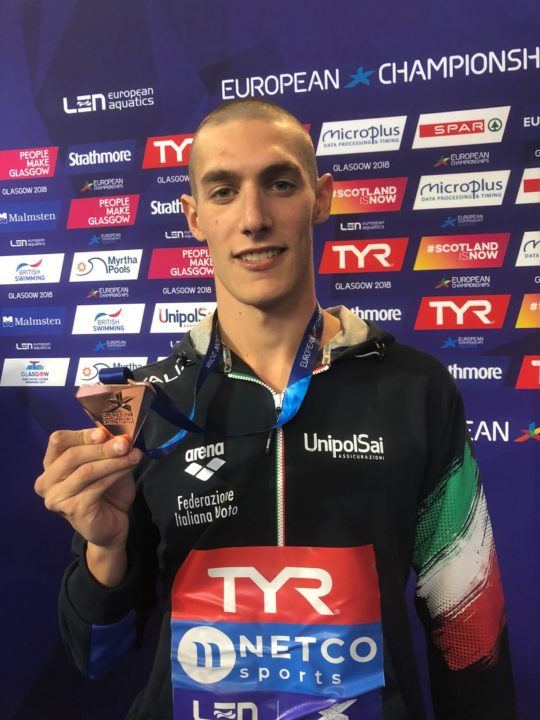 Italian sprinting ace Andrea Vergani may yet swim at the 2019 World Championships next month, despite having tested positive for banned substance. Archive photo via Giusy Cisale

Italian sprinting ace Andrea Vergani may yet swim at the 2019 World Championships next month, despite having tested positive for banned substance. As we reported back in April, the 21-year-old freestyle specialist had tested positive for cannabis, immediately receiving a temporary suspension by  Italy’s Anti-Doping Federation, NADO Italia.

The NADO Italia Court has now rendered a decision on Vergani’s case, implementing a 3-month suspension effective April 19th. That means the punishment ends on July 18th, rendering the athlete possibly available to compete in Gwangju at the World Championships, which begin on July 21st. Vergani’s primary event, the men’s 50m freestyle, begins on July 26th.

Here is the verbiage of NADO Italia Court’s decision:

The Second Section of the TNA declares the athlete Andrea Vergani (registered with the FIN) responsible for the violation of art. 2.1 CSA, imposes the disqualification of 3 months starting from 19 April 2019, date of its precautionary suspension, and expiration on 18 July 2019 and cancels the results achieved by the athlete on 2 April 2019 at the Absolute Italian Swimming Championships held in Riccione , rejecting any other questions. Also condemns Mr. Vergani to pay court costs quantified at 350 euros.

At the Absolute Italian Swimming Championships mentioned above, Vergani took the gold in the men’s 50m freestyle in a then-#3 time in the world of 21.53. With those results null and void, as well as the fact that he will still be under suspension during the Sette Colli Trophy, another qualification meet, his participation in Gwangju would be solely by coaching discretion.

The man has proven he’s capable of medaling for Italy, having taken the 50m bronze at last year’s European Championships, as well as a bronze as a member of Italy’s 4x50m freestyle relay at the 2018 Short Course World Championships.

One can certainly think of more dangerous and suspect drugs which need to be tested for than cannabis, but WADA and the international rules are pretty clear. OK, it’s not a stimulant or artificial hormone, so its “absolute” effect on results was probably nil, but swimming has to be a ‘clean’ sport, esp. with the 100,000’s of younger swimmers involved and who look up to international athletes. These people are ‘role models’ of some sort – act like it!

yeah, because cannabis automatically defined a person is not a good person…

Not even the drug traffic support could be used as anyone know that this is not what gives money to drug cartels.

Also marijuana is legal in many places already too..

I don’t know whether this is just rubbish or incoherence. . . .
When you swim at an international level, you agree to the rules WADA and FINA set – like it or not.
Cannabis is prohibited, no matter how many US states defy federal law and say it’s ‘legal’ – that’s not even the point.
WADA and FINA rules are the point – Vergani knew that and violated the rules, ergo, a punishment.