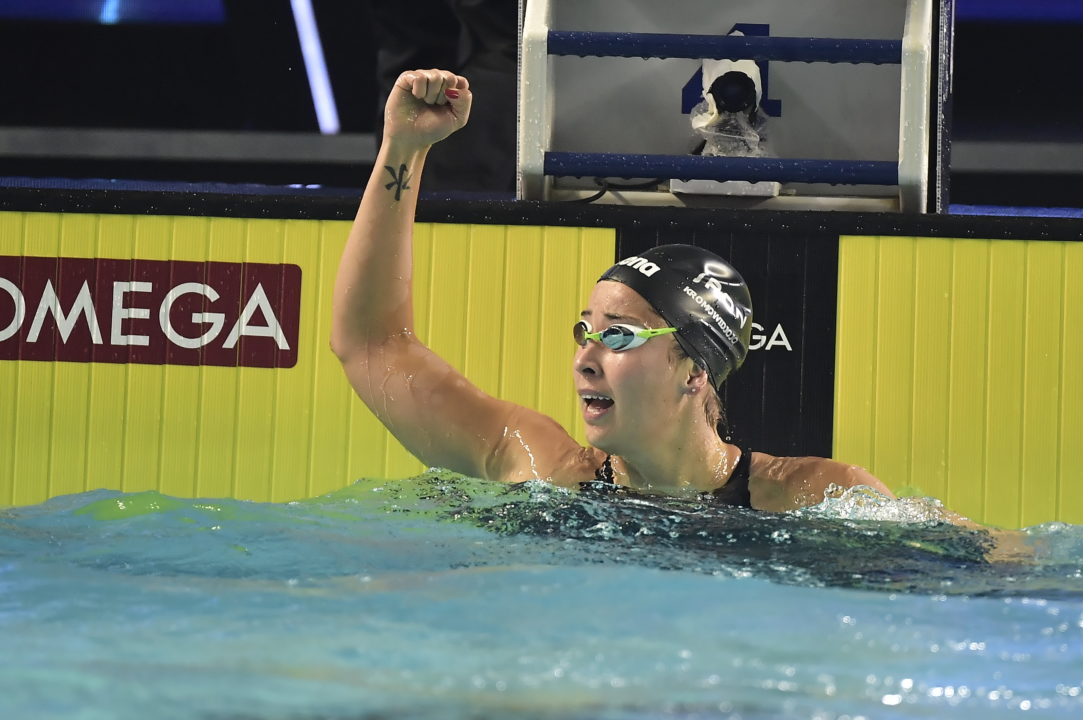 Last year, Iron was a distance- and IM-based roster carried through the mega-point skin races by a pair of standouts. Ranomi Kromowidjojo returns, and should be among the best women’s skin entrants in freestyle. But losing team MVP Vladimir Morozov hurts. Iron has restocked as well as can be expected – Maxim Lobanovzkij and Marco Orsi have both been 20.6s in the 50 free – but Morozov was a massive multi-stroke weapon. Still, sprint free remains a strength, if a bit less of a top-end strength as last year.

Iron is stellar in men’s fly. Not only do they have the fastest-rising 200 flyer on the planet (Hungary’s Kristof Milak) but they also have short course 50 fly world record-holder Nicholas Santos to hold down the sprint end.

For the women, IM is a clear strength, with captain Katinka Hosszu and Spain’s Mireia Belmonte combining for a tough-as-nails duo that truly lives up to the Iron moniker.

Breaststroke looks to be in tough shape. On the women’s side, Iron had snagged Australian Jess Hansen from the London franchise, but Hansen is now reduced to a finals-only entrant based on Australia’s pandemic travel bans. To make matters worse, South African Tatjana Schoenmaker also withdrew late in the game. Jenna Laukkanen is a great last-minute addition, but the depth there still suffers.

Iron may struggle in distance free, but only because their elite swimmers will be asked to do so much. Milak is the team’s best 200 and 400 freestyler by a lot, but he’ll be busy with butterfly duty and that’s a brutal set of events. Same goes for Hosszu (the team’s top 200 freestyler) and Belmonte (the top 400 freestyler).

Free: As mentioned above, Kromowidjojo is arguably the top women’s 50 freestyler in the skin format, with incredible multi-round endurance. Lobanovzkij and Orsi have a ton of short speed, but the second and third rounds might be a problem for the two more sprint-based men.

Back: Robert Glinta should be a solid entrant for the men, with a 23-low career-best. The women will be pretty thin here, with Caroline Pilhatsch and maybe Kromowidjojo filling in.

Breast: Emre Sakci is one of the better swimmers you might not have heard of in the ISL. His career-best of 25.82 should make him a pretty good breaststroke prospect here. The women are much better in the 50 breast than the 100, but Laukkanen, Zmushka, and Hulkko are probably not threats to win the skin.

Fly: Santos has a chance to be dominant in the 50 fly, though his multi-round endurance remains to be seen at age 40. Kromowidjojo is the top woman, and a very good skin racer in both fly and free.

There’s no doubt that Iron is going to miss Morozov, and like last year, a roster built on tough distance swimmers may have some issues with sprint relays and relay depth. Still, Iron wasn’t far off making the final last year, and if the league moves away from grouping U.S. and European franchises for postseason qualification (that’s not clear yet), it probably helps Iron.

The Iron roster this year is actually pretty strong across the four skin strokes – they definitely adapted to the advantages that became quickly apparent in the ISL format last year.

The quirks of the new schedule might be a boost too – Iron has to swim against defending champs Energy Standard twice, but has only two other matchups with returning finale teams (London and Cali). Iron also gets three matches against the DC Trident (who finished a spot below Iron last year) and two against the expansion Toronto Titans.

That should help Iron press to potentially unseat LA or Cali for a finale spot, depending on the postseason qualifying criteria and whether two American franchises will once again be guaranteed finale spots.

I think your forgetting Orsi for 100 IM, wasn’t he like a European or World champ?