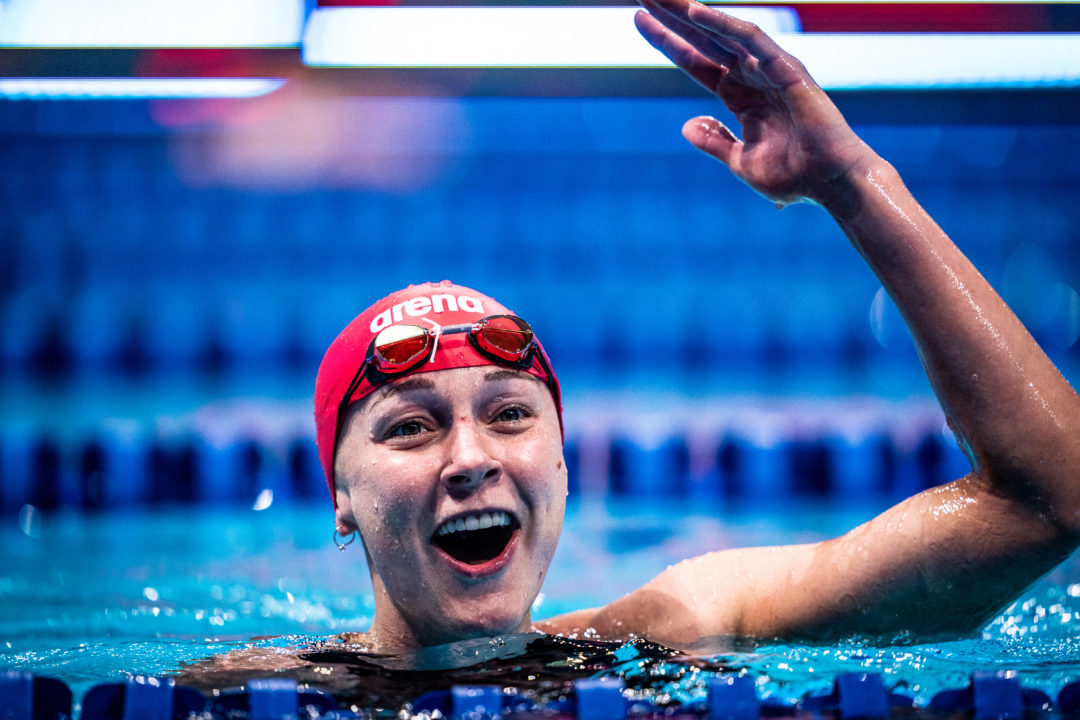 Sarah Sjostrom has targeted the Canet stop of the Mare Nostrum Series in June in Canet, France as the date of her return to competition. Archive photo via Mine Kasapoglu/ISL

Olympic gold medalist and World Record holder Sarah Sjostrom has set a target date for her return to competition: June 1-2 at the Canet stop of the Mare Nostrum Swim Series. The revelation came in an interview with Sweden’s Dagens Nyheter.

She says she’ll then follow that up with a meet at the Italian Sette Colli Trophy from June 25-27 in Rome.

The 27-year old Swede is 12 weeks removed from an injury to her elbow when she slipped and fell on a patch of ice. The injury required her to undergo surgery, including having a metal plate and screws installed to stabilize the fracture.

Sjostrom has been posting updates of her rehab to social media, including sharing that she lost 4 centimeters (just under 2 inches) of muscle mass on her right arm while it was immobilized.

Timeline of Sjostrom’s Return (click the date for more):

Sjostrom also revealed in the interview that she is doing about 7 or 8 pool sessions per week along with three strength sessions and a bike session once per week.

“Swimming is going better and better,” she said. “I can swim quite well in freestyle. When it comes to butterfly swimming, I still cannot swim a full butterfly stroke, however, I train a lot of butterfly skills.”

She says that while the situation is “not optimal,” they are currently ahead of schedule on her rehab.

Sjostrom was non-committal about whether she’d attempt to swim butterfly at the Olympic Games, saying that she would have to see how things progress in the next few weeks. She acknowledged that she doesn’t have huge expectations for Tokyo: “There will probably be people who will still paint me as a favorite, but you should not expect 3 gold and 3 World Records.”

The 2021 Mare Nostrum series, a high-dollar multi-city European series that is one of the oldest international series in the sport, will begin in Monaco on May 29 and 30. It will then continue to Canet, France on June 1 and 2, before finishing in Barcelona on June 5 and 6.

Sjostrom has 3 Olympic medals, all earned in 2016: gold in the 100 fly, silver in the 200 free, and bronze in the 100 free. She is also an 8-time World Champion in long course, winning her first title in 2009 when she was just 15 years old, setting the World Record in the process, and most recently in the 50 fly at the 2019 World Championships. That’s in addition to 3 Short Course World Championship titles, 22 European Championships, and the International Swimming League Season 1 (2019) MVP award.

Has she indicated when/if she intends to have the hardware they put in her arm removed? I have had the same injury that Sjostrom has (TWICE!) and I wasn’t able to get full extension until they removed the implants (though in my case it was pins and wires instead of screws and a metal plate).

Yufei and Mcneil are shaking..

Fortunately for the Swedish Medley relay team (if they are allowed to go even though the qualified at the 2019 World Champs) Louise Hansson is improving a lot in the fly so having her doing the fly should not affect the relay to much even though Sarah had a 55.0 fly split back at the 2017 World Champs (actually think she has been 54+ but do not want to go through all the results to find it).
And Louise was the flyer on the 2019 Medley Relay.
I will leave it up to someone else to do the math to show what would be the fastest Medley Relay line up.

I agree with Steve Nolan. I think with Sjostrom’s injury, backstroke is probably a bad idea.

Sjostrom never swam the leadoff (back leg) in the Swedish medley relay in more than a decade of career (her first great win at Euro Champs in the spring of 2008). She was a huge factor swimming fly. At Worlds 2017 Sweden swam a great 3.55.28, unfortunately good only for fifth, and Sjostrom swam a 55.0 fly leg, Coleman a 52.9 free leg and the back leg was swum by Lindborg (1.01.5). At Worlds19 Coleman swam the back leg but she was only a tenth quicker than Lindborg, whilst Louise Hansson in the fly leg was 2 seconds and 2 tenths slower than Sjostrom, and Sjostrom in the free leg was “only” 4 tenths faster than Coleman. So, also because… Read more »

I wonder what an uninjured Sarah could have done on a Medley Relay as the backstroker as her PB unrested is 59.9 in the 100m Back.
From this point of view I am going to play with the numbers and assume that she could at least have matched that time (last day and having done several other events I am not going to assume she would have dropped any time), Sophie H 1:05.6 in the breaststroke (1:06.1 flat start), Louise H 56.1 fly and Michelle C with a 52.6 free split (53.0 flat start in 2019). That gives us 3.54.2 and over 1 second under the national record, but that is just speculations of what could have been without… Read more »

What event does she have the best chance to win in? It has to be the 50 free right?

I am astonished. Truly. This is such a bad injury, the elbow joint is critical to swimming any stroke. If she delivers great performances in Tokyo, I’m comfortable stating that is the great story of the Games. Definitely rooting for Sarah Sjostrom.

I do agree it would be an incredible story for sure.

However Rikako overcoming Leukemia though makes me tear up every time, even though she’s not swimming individuals. Suffice it to say, there will always be a wealth of inspiring stories at the Olympics and I suppose its not really a competition in that sense.

Confirmed that Sarah Sjostrom stans are the swimternet equivalent of Barbs

“Injured Swedish Swimmer” makes her sound like some middling National teamer and not like, ya know, THE Sarah Sjostrom

Totally agree. She is the current holder of more world records than any other swimmer, male or female..

Way to go Sarah! Itˋll only get better from here