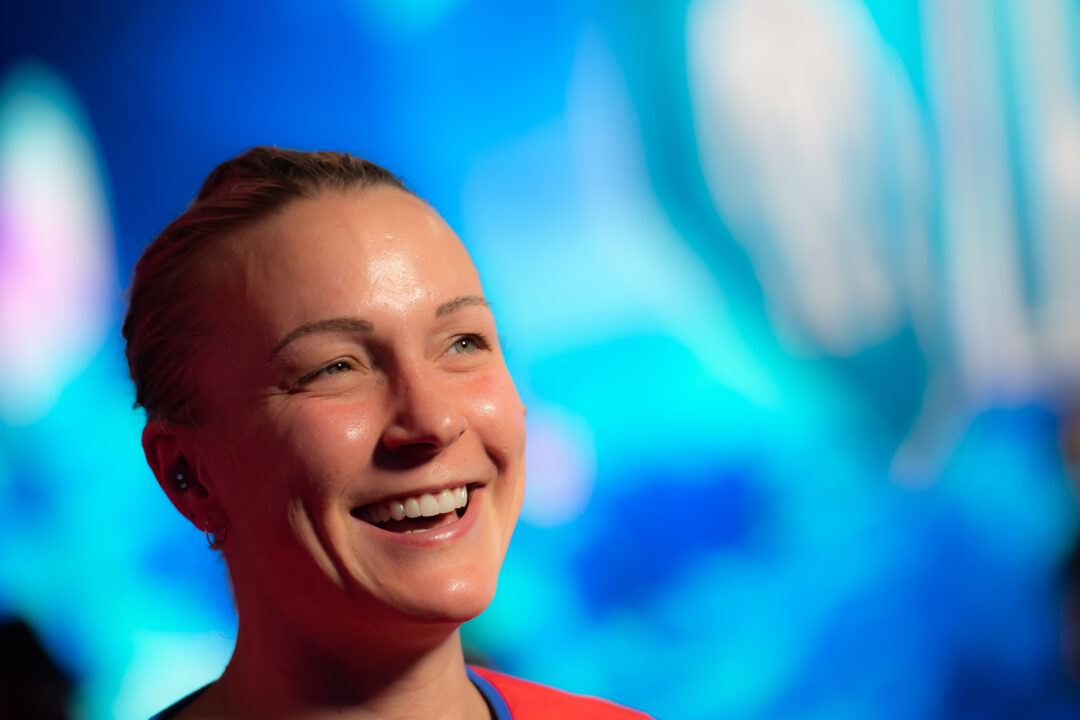 Sarah Sjostrom says she lost 4 centimeters of mass on her injured right elbow while recovering from a fracture suffered in February. Archive photo via Mike Lewis/Ola Vista Photography

Olympic gold medalist and World Record holder Sarah Sjostrom of Sweden has progressed to a new stage in her rehab from a broken elbow.

In a video posted Friday to her Instagram account, Sjostrom demonstrated the first stage of a pushup progression that puts her on the path to bearing greater weight.

In the caption to the video, Sjostrom says that she loss around 4 centimeters (1.5 inches) of muscle mass on her right arm while recovering from surgery. In early February, Sjostrom slipped on ice while visiting a friend, resulting in a broken elbow. A surgery to repair the fracture had her entire arm encased in a temporary cast and sling, with a metal plate and screws inserted into the elbow.

Sjostrom is starting her pushup progress by doing pushups almost upright against a bar on a weight rack. Because of the angle of the body, these pushups put much more of the bodyweight on the legs, reducing the amount of strain on the upper body (useful both in injury rehab and for beginners to maintain proper form in early stages of work). As the bar is lowered on the rack, more-and-more weight will transfer to the upper body.

Sjostrom returned to the water in early March, though she has been doing primarily kicking work.

She was also the MVP of the first season of the International Swimming League in 2019. Even before her elbow injury, she was dealing with a back injury during the 2020 season, which kept her out of 1 regular season meet for the runner-up Energy Standard club.

Go Sarah! The swimming universe is rooting for you!

Really would love to see her win Olympic gold in Tokyo, whether it’s the 50 free, or 100 free/fly

and tying for gold with ikee in any of those events