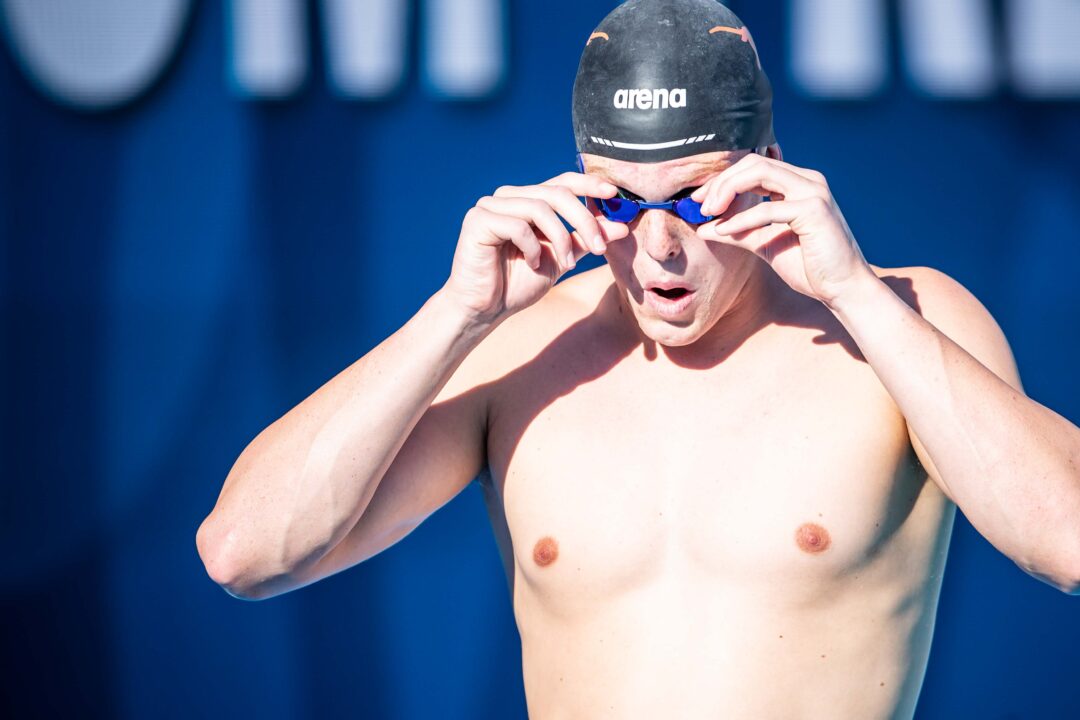 Luke Hobson took out Drew Kibler's meet record in the 200 freestyle and nearly established a new personal best with a 1:32.50. Archive photo via Jack Spitser/Spitser Photography

The Texas men had their second meet of the season on Thursday, competing in the Sam Kendricks Memorial Orange & White Classic intrasquad at their home pool in Austin.. The Orange and White intrasquad, which is an annual meet for the Longhorns, was renamed to honor former Texas swimming assistant coach and former University of Texas student.

Kendricks coached under head coach Eddie Reese in the 1980s, a decade in which he also got his start as an announcer for swim meets. He rose to prominence as an announcer for the sport and became one of the most notable names in the game. Kendricks passed away earlier this year, having been diagnosed with Merkel Cell Carcinoma last year.

Two meet records went down at the 2022 edition in the form of Luke Hobson‘s 200 freestyle and David Johnston‘s 1000 freestyle.

Hobson, who is coming off a massive 1:45.59 long course swim at last month’s Duel In The Pool, was nearly eight seconds quicker than he was in the 200 free at the Orange/White meet last season (1:40.29).

The 100 backstroke swim from Foster got him into the wall more than a second ahead of second place’s Chris O’Connor who swam a 47.20 and third place finisher Ethan Harder who hit a 48.05. O’Connor and Harder were both on the white team.

Corbeau’s two victories were both a bit slower than how fast he’s been in recent years, trailing his meet records in the events of 51.99 and 1:53.48.

Daniel Krueger, of the white team, also managed to notch two wins as he took first place in the 50 freestyle and 100 freestyle. In the former, he was the only man to crack 20 seconds with his 19.54 and was followed by Aleksej Filipovic who swam a 20.12. Peter Larson was right behind Filipovic with a 20.16 for third place.

Texas and riding crazy momentum and under the staples of Foster bros, Corbeau, Hobson, Johnston, and Danny K, with the emergence of guys like Peter Larson and Grimm, Texas has a real shot to spoil the party for cal

Super excited to see how Luke Hobson does this season. He’s looking gooood.

1:29 for Hobson this year seems likely.

Seems possible is how I’d say it. How are his undies?

What were the splits for the relays

I know Alek F was 19.5, because that was the buzz on deck afterward

Seems like that guy will be used as a sprinter this season, seem to recall him swimming 2 IM and 100 fly in high school.

Ooh, good to know. Thanks for the info.

Texas is sending over a results file when its available and we’ll update it in this post.