Hannah Moore Swims Lifetime Best in 200 Back in Greensboro, a Month Out of Youth Olympic Games 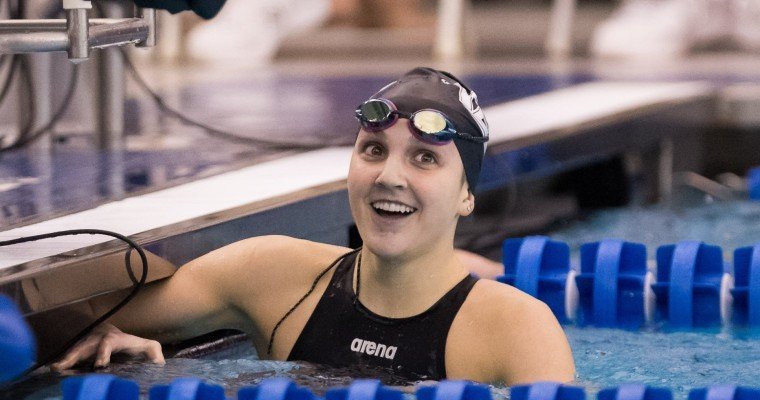 Hannah Moore, who is racing unattached – YMCA of the Triangle Area at this meet, has won her 4th event... Archive photo via Tim Binning/TheSwimPictures.com

Hannah Moore, who is racing unattached – YMCA of the Triangle Area at this meet, has won her 4th event of the meet on the final day of the 2014 Greensboro Sectional championship, and the last one was the most impressive time of the lot.

Moore, in preparation for the upcoming Youth Olympic Games in late August, did get a little versatile here in Greensboro, but in her last event she came back to her best event: the 200 backstroke. In that event, she swam a lifetime best of 2:10.18, and between the two rounds of this meet she dropped two seconds from her lifetime best. That’s not a totally unexpected swim from her, rather it’s more of a “course correction” after failing to hit a personal best in 2013.

It could also put her in line for Youth Olympic gold in Nanjing, which once again looks like a medal that Team USA could have trouble finding in 2014.

In the men’s 200 backstroke, Hennessey Stuart of the Denver Swim Association won in 2:01.14. That came after a prelims swim that had him dip under two minutes for the first time in his career with a 1:59.95 – and like Moore, he dropped two seconds at this meet. One meet in to his east coast journey, the North Carolina State commit Stuart has swum very well in Carolina, which is a great sign for his future with the Wolfpack.

Both of those swimmers swept the breaststroke events in Greensboro, but both also showed that their best chance at the Pan Pacs roster is in the 100, despite each continuing to improve their 200 (Craig is the fastest American in the sprint this year).

NC State’s impressive sprint group led the way in the men’s 100 free, but none were able to quite dip under 50 seconds. David Williams won in 50.11. That’s a lifetime best for him by over a second, and he should be into the 49-second range by Nationals. As this NC State sprint group, which goes by “Wolfpack Elite” in the summers, continues to show more and more depth and ability to develop sprinters, they’ll also catch more-and-more attention as another sprint center that could be developing future U.S. relay talent – talent that the Americans need to find to get back on top of international podiums in the 4×100.

Virginia LC senior championships
17-year-old Townley Haas swam 1.50.26 in the 200 free.
He’s on track to swim 1.48 fully tapered in Irvine.
He represents the American future in that event with Gunnar Bentz and Jack Conger in my opinion. And USA needs new talents in the men’s 200 free for the after Rio.