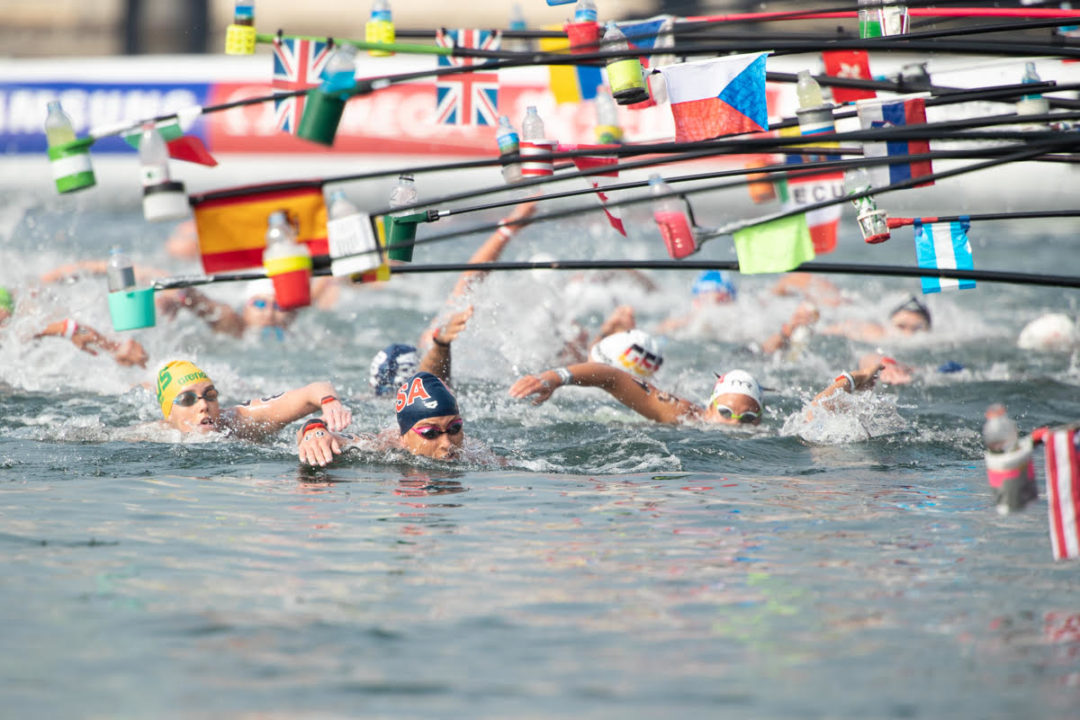 The flags of 194 nations will wave across the 6 disciplines of aquatic sports at the 2019 FINA World Aquatics Championships - an increase of 12 from 2017. Stock photo via “Rafael/Domeyko Photography”

194 out of 209 FINA national member federations will participate across the 6 disciplines of the 2019 FINA World Championships – a record number for the aquatic sport’s penultimate event behind the Olympic Games. After a sharp decline in participating nations for the Budapest 2017 event in Budapest, global participation in the event has rebounded through the FINA Universality program, mostly.

FINA is also expecting an estimated 2,500 participants, which is an increase from the 2,360 for Budapest.

Historic Participation by Number of Nations:

Unofficial entry lists show that just 191 of the 209 FINA Member Nations are participating, though there are still some errors (especially in swimming where, for example, the men’s 100 free was not included). These are the 18 nations that we were unable to find entries for:

Mozambique, Iraq, British Virgin Islands, North Korea, and Yemen all participated in the 2017 World Championships; North Korea, at latest report, were refusing to send a delegation to the event hosted by their political rivals (even though they won medals in 2017); if the other 4 nations were, in fact, participating again this year, then that would close the gap to the expected 15 absent nations.

The vast global participation is viewed as both a blessing and a curse by different factions within the sport. While some view this as FINA fulfilling its constitutional mission of spreading aquatic sport around the world, others lament that the interests of the world’s best swimmers and best swimming nations are sacrificed in part for the benefit of globalization of sport.

I think they should invite the top 30 in all swimming events regardless of whether the swimmers meet their countries qualifications. These other countries, i think it’s up to them if they think it is worth the travel cost to have a few swimmers at the meet.

I agree with this. I think the top 30 should be invited and entitled to compete even if their country will not pick them. They should compete under the Olympic flag.
Edit: Costs? This is not insurmountable. A top 30 swimmer whose country refused to put them on the national team would have to pay their airfare with a place in the village etc provided by IOC. With the new ISL league there should be enough money available to make this work. the reason this sort of thing doesn’t happen is so that selectors and blazers can keep their snouts in the trough.

North Korea on a new level of pettiness