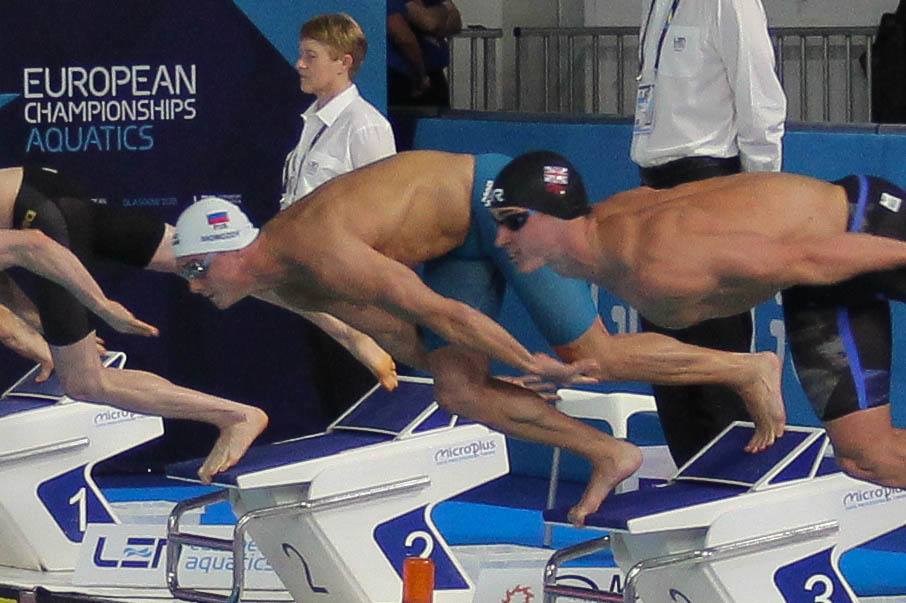 Reigning Russian national champion Vladislav Grinev got under the 48-second barrier tonight in Kazan, taking over the top spot in the 100m free rankings. Archive photo via Giusy Cisale

After sealing up her 300th World Cup victory last night in Kazan, 30-year-old Iron Lady Katinka Hosszu was back in form on day 2 of this stop.

Beating the women’s 400m IM field tonight by almost 7 seconds, Hosszu racked up 891 FINA points with her final time of 4:36.77. That performance beat out the 4:38.15 she produced in Berlin but was slightly slower than the 4:34.37 from Budapest. Her quickest of the World Cup season rests at the 4:32.30 notched at the Tokyo stop, a mark which stands as the World Cup Record in the event.

Speaking of World Cup Records, one bit the dust on the men’s side tonight, courtesy of Russia’s Vladislav Grinev. The reigning national champion in the 100m freestyle stormed to the wall tonight in the only sub-48 second time of the field.

Tonight, Morozov was less than half a second away from Grinev, touching in 48.15, while Mikhail Vekovischchev, last night’s 100m fly winner, came on strong at the end to round out the top 3 tonight in 48.41.

Grinev’s time checks-in as the fastest of the 2019/20 season, displacing Morozov’s 47.99 outing from Budapest.

Morozov had earlier raced in the men’s 50m backstroke here, clocking a winning effort of 24.55. That’s just off his 24.40 season-best registered at the Singapore stop to earn a new World Cup Record.

American Michael Andrew was only .05 off of Morozov with his silver medal-worthy 24.60, while his NY Breakers teammate, Grigory Tarasevich of the host nation, was 3rd in 24.85.

German national record holder Philip Heintz was in the pool tonight, taking on the men’s 200m IM field. He was able to hold off Lithuanian 400m freestyle victor here, Danas Rapsys, touching in 1:59.11 to Rapsys’ 1:59.97. The two men represented the only finishers of the field under 2:00. Heintz holds a lifetime best and German record of 1:55.87 from 2017.

Although Dutch maestro Kira Toussaint fired off a new national record of 59.14 in the women’s 100m backstroke heats this morning, the 25-year-old wasn’t able to match that speed come tonight’s final.

Instead, it was Australian teenager Kaylee McKeown who got the job done for gold, hitting the wall in 59.25. Splits for McKeown included 29.06/30.19, just enough to keep Russian Mariia Kameneva a hair behind to the finish.

For 19-year-old McKeown, her 59.25 time tonight checks-in as the 3rd-fastest performance of her career. She holds a lifetime best of 59.10 posted at this year’s World Championships where she placed 5th in the final there in Gwangju, Korea.

Arina Surkova of Russia was tonight’s 50m fly winner for the women, getting the only sub-26 second time of the field in 25.62. She took down her own Russian record in the event, holding off Aussie national record holder Cate Campbell in the process.

C1 touched in 26.08, while Jeanette Ottesen of Denmark rounded out the top 3 in 26.11. You can read more about Surkova’s record-setting swim here.

Japan’s Yasuhiro Koseki followed up his 100m breast bronze from last night with a gold in the men’s 50m breast tonight. Clocking 27.07, Koseki was .04 ahead of Brazil’s Felipe Lima and .08 ahead of Dutch record holder Arno Kamminga, who finished in 27.15.

Koseki owns the Japanese national record with his speedy 26.94 put up at the Mare Nostrum Tour stop in Monaco last summer.

Kamminga’s Dutch record in this 50m sprint rests at the 27.00 he notched at the World Cup stop in Budapest, so tonight’s effort was only .15 away from his lifetime best. Lima, on the other hand, owns the Brazilian national record in a much quicker 26.33.

Time was a WC record. Grinev’s just better than Morozov in 100 free.

Since Mrs. Race spent more than 100 words reporting on low value low importance race of Hosszu where she was seeded with advantage of 10sec let me comment on it too.
It looks like a main concern of Hosszu at this stop is energy saving. She entered unusual low number of events. Four only. With three wins only counted in competition against Cate Campbell for the Grand Prize she races two no challenge IM races and two extra events (200 fly, 200back) in case if she fails in one of them. With her win in 200 fly she doesn’t need 200back win anymore (though it’s still some money) and may skip it tomorrow because it comes before 200IM and… Read more »

Hahaha, if if if. If miss Campbell had a better race, if she world swim the IM events and win, if Hosszú world get sick, life world be different for mr Jozhik. Swimmers do not think your way…

Guessing is what fans do. Who cares what swimmers think 😀
There is only 16 swimmers in 200IM and only two seeded under 2:10. No problem to get in the final at all. Will Hosszu try her current best in this event in the morning? We will see in an hour and then you have all rights to hahaha.

Man this looks bad for seebohm.

Minna and Kaylee are both going to smash her to bits next year at trials.

Its Nov . Good to see them do some LC . Next we’ll them sc for isl. . As for trials, , there are 2 16 year olds WldJnrs medallists sitting just over the minute.. They came from nowhete in a short time & have ambitions too. .

Seebohm is very tough. Nothing would surprise me if she still makes the team.

Btw . Etiquette is to use Emily if you are using Minna & Kaylee.

Not necessarily. She’s been written off before and has come out on top. Also, she has the 200 IM feather in her cap if she wants to train for an event that is wide open in Australia.

Is Andrew ever going to beat Morozov??

He has already beaten him.

Awesome swim by MA in that race, but I think Morozov didn’t even swim the 100IM at 2016 SCM Worlds

Vlad wasn’t in that race