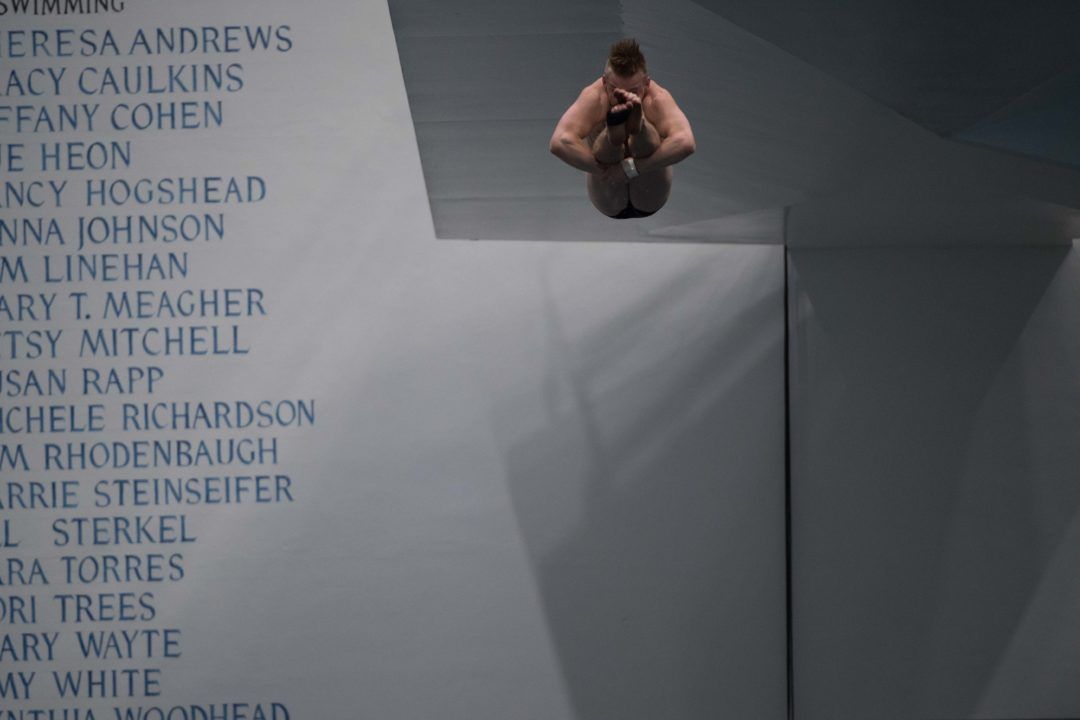 The 2017 USA Diving National Championships proved to be drama-filled Friday night at the McCorkle Aquatic Pavilion on the campus... Current photo via Mike Lewis/Ola Vista Photography

The 2017 USA Diving National Championships proved to be drama-filled Friday night at the McCorkle Aquatic Pavilion on the campus of the Ohio State University as Greg Duncan (Dominion Dive Club) and Olivia Rosendahl (Unattached) came away with the national titles. Duncan won the men’s 3-meter crown and Rosendahl snagged the women’s 10-meter title to close out the fourth day of senior competition.

Duncan dazzled in the final with all six of his dives, earning awards worth 63.00 or more points on each one. The University of North Carolina – Chapel Hill commit started his night with a forward 3½ somersault pike that totaled 72.85, putting him in first after the opening round. He held the top spot through round two with a back 2½ somersault pike that earned 67.50. Duncan would find himself in fifth after scores of 68.25 and 63.00 in the third and fourth rounds, but lit up the scoreboard for 67.50 on a forward 2½ somersault 1 twist pike to get into second place. He saved his best dive for last with a forward 2½ somersault 2 twist pike worth 76.50 points to seal the title.

“It’s redemption for what happened in juniors,” Duncan said when asked how the national title feels. “In juniors I overthought everything, so I figured if I wanted to do well this time I just had to relax myself.”

The women’s 10-meter final composed the second half of the night, but was the first half of a live broadcast on NBCSN as part of the 2017 Team USA Summer Champions Series presented by Comcast. Rosendahl compiled 319.50 points for gold, adding to a stellar year that saw her win a NCAA title on platform back in March.

“This is amazing,” Rosendahl said. “It’s almost better than NCAAs because Laura’s (Wilkinson) been my role model since I was five.”

Wilkinson (Woodlands Diving Academy) finished second in her first major final since coming out of retirement this past March. The Sydney 2000 Olympic Games platform gold medalist tallied 296.25 points and crafted two dives worth 67.20 (inward 3½ somersault tuck and back 2½ somersault 1½ twist pike). The 2005 platform world champion rebounded well from a double balk in the semifinal to find the podium two days later.