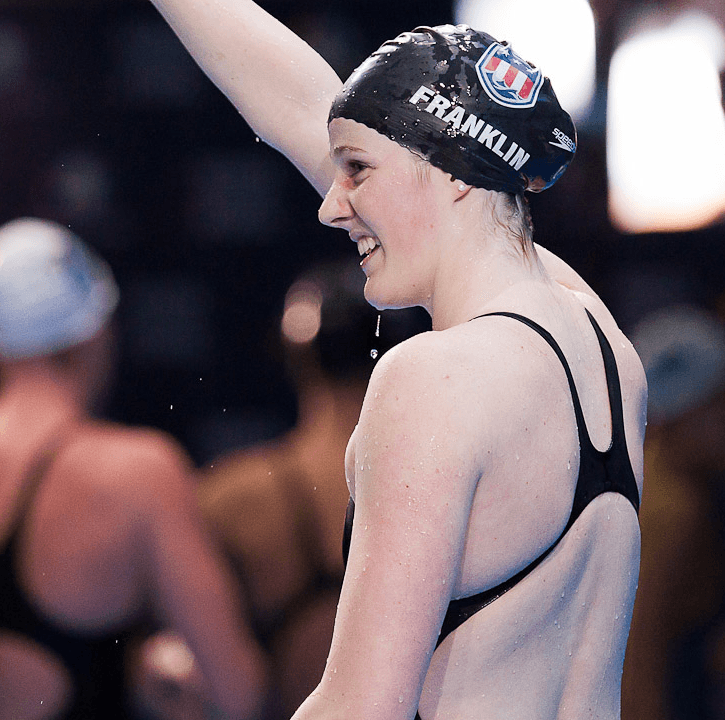 Missy Franklin already has two wins and a Meet Record under her belt in Federal Way.

Colorado Stars Missy Franklin and Kara Lynn Joyce are the higlights of the Western Zone Speedo Championship Series meet being held in Federal Way, Washington this weekend. The pair is skipping the USA Swimming Grand Prix meet in Columbus, as they’ve gone into a phase of their training where they prefer to stay closer to home and just race without all of the fanfare surrounding Franklin’s every move at major meets.

In the teammates’ first head-to-head battle, and the first race of the meet the 100 free, Franklin took the crown in 54.55. That’s just a tenth off of her best time of the season, swum in Austin in January. For her part, the veteran Kara Lynn Joyce looks to be starting to come around – she touched 2nd in 55.22, which is easily her best non-Nationals time since settling into her new routine in Denver. That’s a very positive sign for her chances at the Olympic Team.

In the men’s version of the 100 free, South African Roland Schoeman, who is now training at the Phoenix Swim Club took a win in an unshaved 49.67 (ahead of an exciting youngster, 16-year old Edward Kim in 51.35). Schoeman was a bit perplexed last year at the World Championships when he was held off of the South African’s 400 free relay – a relay that are medal contenders with a back-to-normal Schoeman on the anchor. This swim should give a huge boost to a swimmer who needs confidence to swim well.

Megan Jendrick made her post-pregnancy return to major swimming at this meet (though she did swim a very low-level yards meet in early February) by winning the 200 breaststroke in 2:33.32. That’s not a great time without the context of an athlete just 5-months into her new career as a mother. Under the circumstances, it’s phenomenal.

In the men’s version of that race, 15-year old Tommy Brewer out of Oregon dropped 5 seconds and became only the thirteenth 15-year old in history to break under 2:20 with a 1:19.56. That bumps him ahead of the likes of collegiate freshmen stars Christian Higgins and Kevin Cordes for 9th on the all-time list.

Franklin and Bonnie Brandon would have a showdown in the 200 back, which Franklin took in a Meet Record of 2:09.30. Brandon took 2nd in 2:11.80 – but as is true to her distance roots, she finished the race very well with a 1:07.9 back-half. This is blossoming into a great rivalry, thanks in no small part to the ESPN-fueled hype at the Colorado State Championships (though they didn’t have much in the way of a head-to-head battle at that meet).

Future Cal bear Jacob Pebley won the men’s 200 back in 1:59.64. I guessed that he would using this meet on a bit of rest to test his training ahead of another pre-Trials peak, but early results show that instead he’s approaching it from a mental-push perspective, so that’s a solid in-season time.

Franklin would tack on a cruising 800 free relay split of 2:00 to end the session.

Night one in Greensboro was significantly quieter, as the events focused on distance events and relays. Jimmy Yoder out of the Stingrays in Georgia won the 800 free in 8:18.36, which is about a second slower than he was at the summer/2011 version of this meet.

There will be bigger swimming in later nights of this meet. That includes SwimMAC’er Davis Tarwater, another young Georgian out of SwimAtlanta Gunnar Bentz, Georgia commit Matias Koski, and impressive Star Aquatics sprinter Faith Johnson.