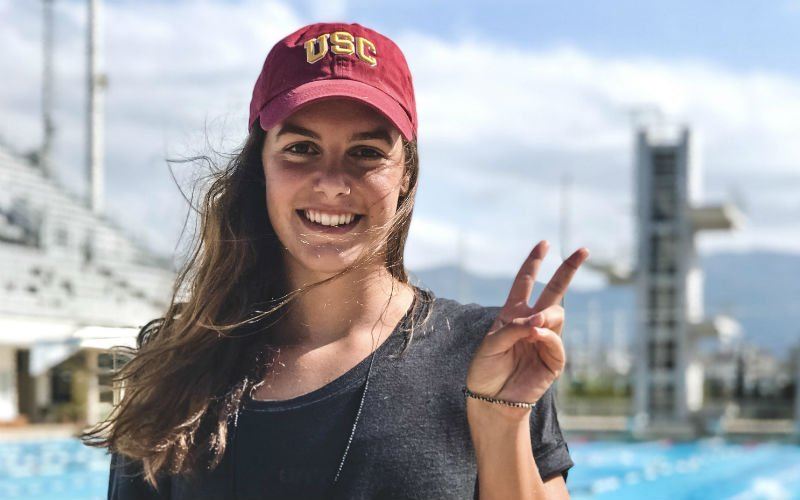 Pavlopoulou, who has broken over 50 Greek Junior Records, will begin her USC career in the fall of 2019. Current photo via Nicole Pavlopoulou

The 17-year old Pavlopoulou swam at the 2017 World Junior Championships and will represent Greece at the upcoming Youth Olympic Games as well.

The team’s best current sprint breaststroker, Riley Scott (58.64/2:06.85) graduates after this season (before Pavlopoulou arrives), but Maggie Aroesty, as sophomore, will be the obvious replacement for those relay spots (59.35/2:06.85).

“It gives me a great pleasure to announce my verbal commitment to the University of Southern California (USC) and its esteemed swimming program as of Fall ‘19. It is simply an honor to have the opportunity to study in one of the top universities of USA and coached by the legendary David Salo and the rest of his coaching stuff. I will be eagerly awaiting and counting the days to move to LA to be a #trojan and work hard and smart with my coaches and my future teammates. I am looking forward to become a valuable contributor to the Trojan’s Swimming Program and develop further my swimming at the highest possible level. #fighton Trojans 💛✌🏽❤️ ”

Why wasn’t Yulia Efimova listed as the 2-times Olympic medalist who was in breaststroking program at USC? Or she wasn’t?
She is a pathological cheater but her Olympic medals are officially clean. It looks like USC program worked very well for her.

I think they didn’t include her because she didn’t swim for the college team ever, only as a pro

SwimSwam needs to swap the vote system for a block system

Don’t worry, John. It’s has been done already multiple times. This particular comment passed the censorship and probably was considered worth the discussion.

Dear, John. Ain’t you interested who the swimming hero of Nicole Pavlopoulou is. Soni, Hardy, Efimova, King, Meilutyte. Or somebody else. Don’t get surprised with the answer. Hiding from the facts of reality is not a good thing and is very unproductive approach to the problem. You can boo Efimova or be quiet like DEE but want you it or not Yulia Efimova competes officially at FINA’s tournaments and does it at high level. I think that her talent was shaped by Dave Salo proving him to be successful coach. It isn’t his fault that he coached the person with criminal mind. And I don’t see any reason not to mention Efimova as successful result of his work.

Am I interested in who her hero is? Sure….. not your hero. You just randomly threw Yuliya into the conversation. What facts am I hiding from exactly? I have honestly less skin in the game concerning Yuliya as I’m neither American nor European so you can espouse you’re opinion on Yuliya but fact of the matter is she has little to nothing to do with this particular article. That is my issue. And the fact that it passed censorship hardly makes it conversation worthy. Plenty of 1-word posts get through that no one replies to.

Congratulations Nicole! You will love USC and all it has to offer both in and out of the pool! I personally don’t have ties to USC but I do know Yozhik has his facts incorrect!
Good luck to you!!!!

I could find no record of her being enrolled at USC so that is why she is not mentioned in the article. She was coached by Dave Salo (USC coach) but no evidence from that that she swam for USC.
This post is about Nicole though. Don’t think that your post relates to her at all. I’m happy for her & congratulate her & wish her only the best there!!

Yes, this article was about Nicole and the hope that she is lucky to be trained in great breaststroking program that proved to be successful producing many Olympic medalists. I actually asked if Yulia Efimova also enjoyed the benefits of this program and if this program had positive effect on her performance. What you are saying is that Dave Salo is using different approach in training pros like Efimova and Meilutite than he does working with college swimmers like Soni and Hardy.
Well despite it sounds strange to me I will assume that you know what you are talking about.

USC once again striking it well with these random (but fast) international people. It seems as though USC is more a federation of international talent than a “team”. Must be tough for some of the recruits to really have a sense of where they fit in when at any moment a new international swimmer can just show up at any time of year. Indeed, USC does have a lot to offer inside but “outside”?…watch your back darling “Southland” is no place to feel relaxed!!..don’t forget to take your body armour.