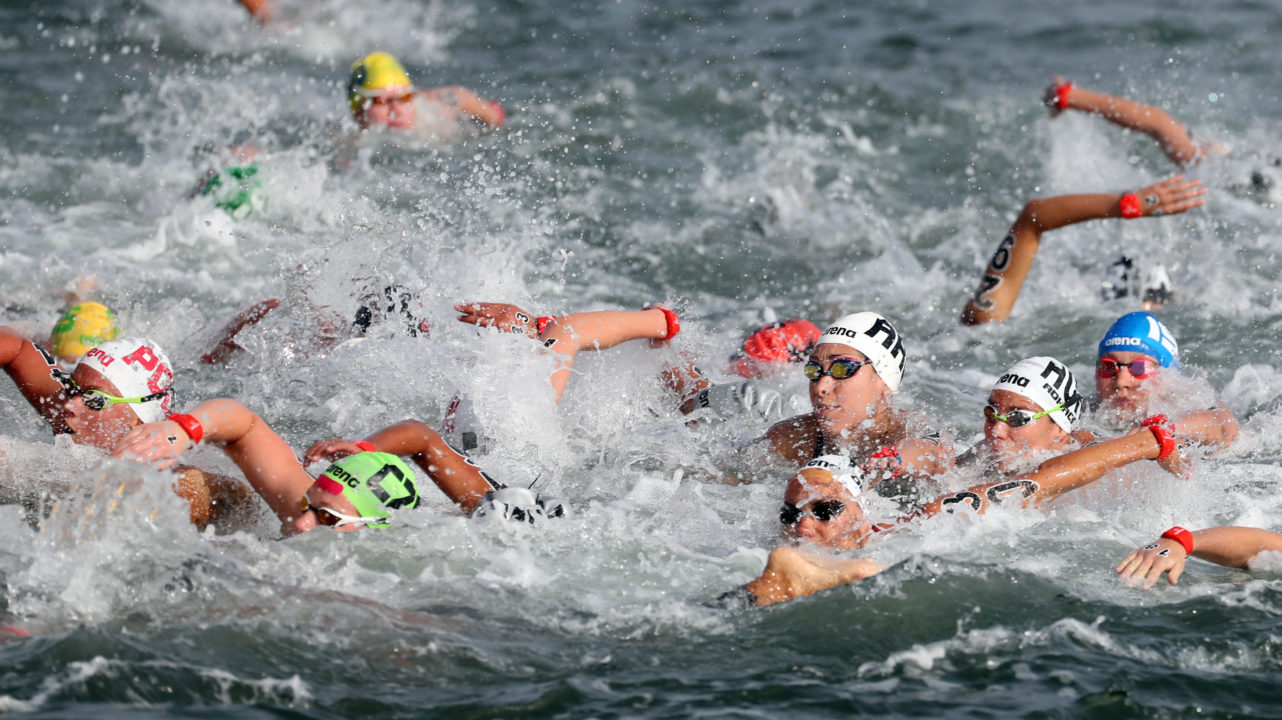 Germany won its third open water team gold in the past four World Championships, edging out Italy and the United States by just tenths of a second. Current photo via FINA-Gwangju2019.com

Germany won its third open water team gold in the past four World Championships, edging out Italy and the United States by just tenths of a second.

The Germans won this event in 2013 and 2015, but fell off badly to 8th place last time around in 2017. And things didn’t get off to a great start in 2019, either: Germany took a yellow card on their very first leg, swum by Lea Boy. A second yellow card would disqualify the German team, so the rest of the group had to be extra cautious.

Germany went with their two women, Boy and Sarah Kohler, first, followed by Soeren Meissner and Rob Muffels. They didn’t use individual 10K champ Florian Wellbrock on the relay, but Muffels was the individual bronze medalist in the featured 10K.

Italy used individual 10K bronze medalist Rachele Bruni on the leadoff leg, and with Giulia Gabbrielleschi second, the Italians swam the same front-half that won them bronze in 2017. Domenico Acerenza and Gregorio Paltrinieri capped off the silver medal.

The U.S. won silver in 2017, but fell to bronze this year. Haley Anderson, Jordan Wilimovsky and Ashley Twichell returned from last year’s relay, but Michael Brinegar was the new anchor. The U.S. mixed up their order compared to the other two medalists, putting their men 2nd and 4th, rather than 3rd and 4th.

I wonder if USA would have faired better with a different order? Brinegar had to makeup10 seconds to catch the Italian and German

Did you see the splits? Twichell out-split both Jordan and Brinegar by over 6 seconds. Perhaps swapping Jordan to the anchor but it’s hard to argue that Ashley third was a bad choice or that any other order would have produced a better result…. 1st leg 7:15; 2nd 6:55; 3rd 6:38; 4th 6:54

Those splits seem off. Didn’t Twichell start her leg with a lead and finish 10 seconds back? Hard to imagine she was faster than her 2 male teammates. Particularly when Brinegar made up a 10 second deficit to catch the leaders.

The end of the relay was one of the best open water races to watch in years. 3 guys going head to head for the last 600 meters (including the world champion in the mile, who got BEAT) and no mention of any of the drama. It’s no wonder open water struggles to grow if even when great races happen it gets no coverage.

But, with cable and satellite broadcast as well as online streams, we were able to watch the whole race live!
I’ll trade lagging online recaps for the opportunity to watch an event live. (Live with somewhat knowledgeable non-jingoistic commentators!)

Awesome job USA – bronze medal at World’s is outstanding! Proud of our swimmers!