Germany Closes Pools to All But Professional Swimmers Amid COVID Resurgence 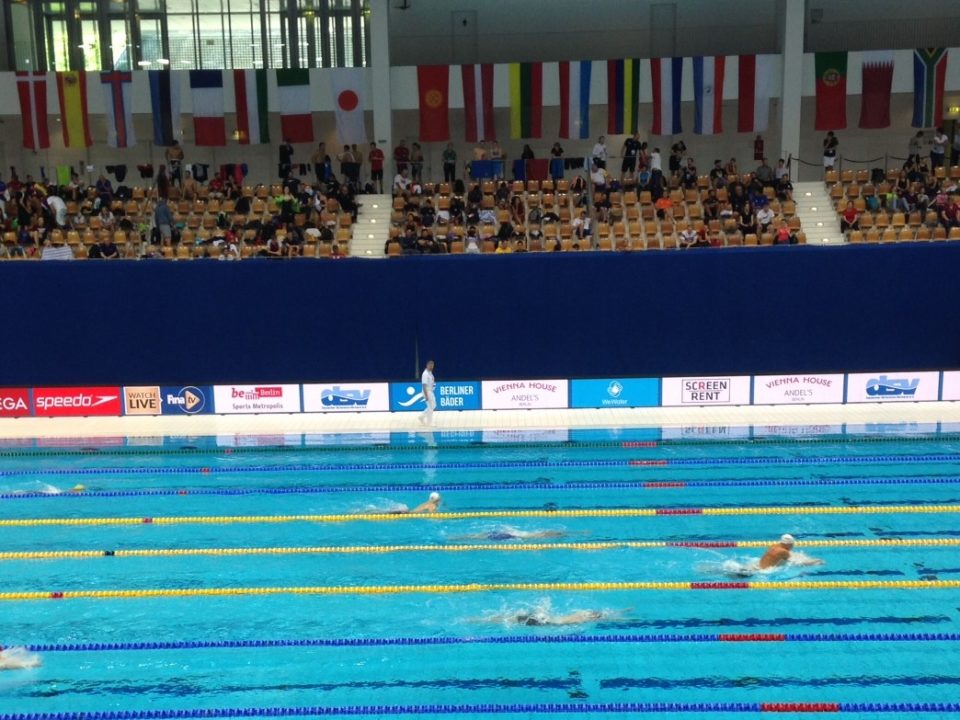 The vast majority of the German Swimming Federation's 580,000 members will not be allowed to train for a month beginning on Monday. Stock photo via Stephanie Haß

Germany will once again close swimming pools for public use and halt amateur sports, beginning Monday, Nov. 2, as part of new lockdown measures to deal with a rise in coronavirus cases nationally.

While professionals training out of national centers in Germany will continue to be able to train, as they have for the vast majority of the pandemic, the latest rollbacks will hit the larger part of the sport: the fitness and age group competitors around the country.

“In view of the very successful efforts to make water sports possible in all its facets through complex and well-functioning hygiene concepts despite the pandemic, the disappointment is understandable for all those who now have to do without with a heavy brake. This restriction hits people from young to old and also their clubs very hard. This decision exacerbates the problems on all levels,” explained Uwe Brinkmann, Vice President of the German Swimming Association (DSV). “Nevertheless, it is now important to tackle the challenge with team spirit and to endure it, despite isolated calls for protest. Because so far sport has not been identified as a driver of infection, but as an essential part of social life it cannot be decoupled from other events.”

Brinkmann says that professional sports may continue to be practice in November but without spectators.

The German Swimming Federation (DSV) has 580,000 members, which incidentally is more than their American colleagues at USA Swimming.

Germany has already canceled the 2020 German Swimming Championships that were scheduled to begin Thursday in Berlin because of the ongoing pandemic, and last week postponed the start of the Bundesliga professional water polo league and the national water polo Supercup.

Other new restrictions in Germany include closing bars and restaurants to diners, and forcing professional athletes in all sports (including the high-dollar Bundesliga in soccer) to play in front of empty stadiums. Theaters, gyms, and comestic studios will also be closed.

“Within weeks we will reach the limits of our health system,” Merkel said at a news conference. “It is completely clear that we must act, and act now, to prevent a national health crisis.”

She said that while the restrictions are “burdensome” for a weary public, but that they are also “necessary” after German hospitals have seen the number of patients double in the past 10 days. The restrictions are less stringent than those seen early in the pandemic, though with winter weather setting in and the decreasing comfort of outdoor activities, they could weigh as heavily.

Coupled with the new restrictions, small and midsized businesses affected by the closures will be compensated with up to 75 percent of losses thanks to a financial aid package worth up to 10 billion euros.

Germany recorded 16,202 new coronavirus cases on Wednesday, which is a new record high. It’s also more than double the country’s ‘first wave’ peak of about 7,000 daily cases in late March. As has been seen with spikes around the world, deaths caused by COVID-19 have increased, but are still below their early-pandemic highs. This trend is partly due to improvements in treatment of the virus-caused disease.

Other European countries are facing similar rollbacks to their sporting culture. Italy, for example, announced on Sunday the closure of many sporting facilities. SwimSwam Italy’s Giusy Cisale says that while FIN, the national governing body there, has given its membership of all age categories and all disciplines permission to continue training, an authority granted to them by the federal government. Those athletes, however, are having trouble finding facilities to train in, given the economics of keeping pools open for fewer-than-normal users.

There’s going to be a massive talent gap in swimming in the future. It’s ok for the professional swimmers to be allowed to keep training, but this means that the gap between them and those just below it will continue to grow. There’s going to be a huge drop out rate amongst swimmers, with interrupted training and no prospect of any competition. Many swimmers are just getting back to full fitness after the long lay off earlier this year, but I’m not sure how many of them will be able to stand another break, especially if it goes on for a lengthy period. From what I understand there have been quite a few who have already quit at University level… Read more »