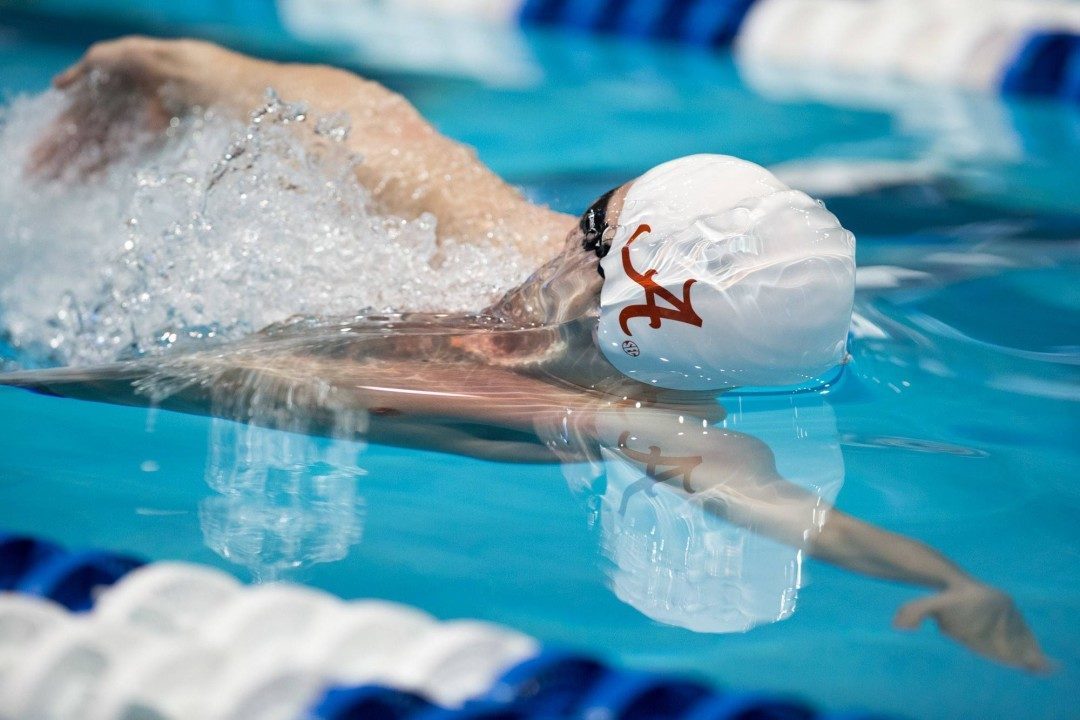 Alabama's Connor Oslin will be the top seed in finals for the 100 back and 100 fly on day two of the Georgia Tech Invite. Current photo via Tim Binning/TheSwimPictures.com

Yesterday the Georgia Tech Invite kicked off in Atlanta with the Arkansas women and the Alabama men coming out ahead after the first scoring session.  Day two prelims in Atlanta were another rankings shaker, with a total of 44 B cuts turned in and 13 new times landing in the top ten of the NCAA rankings.

The 400 IM prelim had seven B cuts turned in between the men and women.  Alabama’s Mia Nonnenburg will lead the ladies into the final with 4:11.26, followed by Arkansas’ Chloe Hannam at 4:15.52.  Those times are good enough for the #5 and #9 rankings for women so far this year in Division 1.  The men of South Carolina will head into the final with the top three seeds, led by Tom Peribonio, whose 3:50.96 lands him at #7.

The Arkansas women impressed in the 200 free prelim, landing #3 and #10 ranked times from Maddie Monroe (1:45.93) and Anna Mayfield (1:46.78.)  They will take the middle lanes tonight in the final surrounded by three other women with B cuts, making this event particularly strong.  The men’s 200 free also produced a top-ten time out of Alabama’s Alex Gray, who will lead tonight’s field with his #9 ranked 1:36.78, and two more B cuts in the heat to make it interesting.

The event to watch tonight though, might be the breaststroke, as the women will have six B cuts along with two swimmers who have moved into the top 10.  Alabama’s Bridgett Blood goes in with 1:00.55 to take the #4 ranking, followed by UNLV’s Lina Rathsack at 1:01.23 that lands her ninth for 2015-16 in Division 1 so far. The men are even more stacked with all eight lanes of the final heat having earned B cuts in the morning, and three of those cracking into the top 10.  Alabama’s Anton McKee rocked the prelim with a #3 ranked 52.98, followed closely South Carolina’s Nils Wich-Glasen at 53.01 for the #5 ranking this year.  Indian River’s Craig Emslie also turned in a 53.62 which would be #7 if he were in Division 1.  If the Google can be trusted, that breaks the NJCAA National Record by over a second.  That is gonna be a hell of a final.

The backstroke also shot holes in the rankings during the prelim, with Florida Gulf Coast’s Elise Haan blasting a 52.32 to take over the #2 spot in the NCAA among a field of four B cuts.  The men also had a strong prelim performance from Alabama’s Connor Oslin, who rocked a 46.76 to rank #4 among three B cuts for the event.