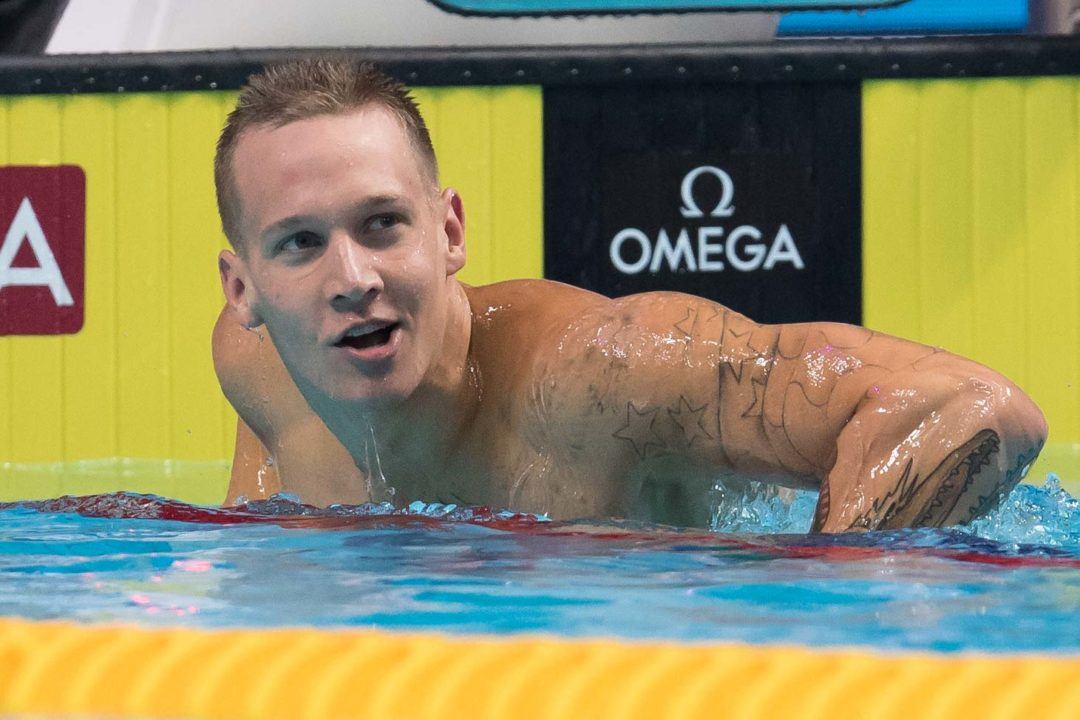 The event started off with a fantasy draft of U.S. National Teamers onto four SwimSquads headed by retired Olympians. Those four teams will compete for series points over the length of the TYR Pro Swim Series, beginning in January and concluding in July. You can check out our recap of the draft here.

The evening continued with the handing out of USA Swimming’s major year-end awards. You can see all award-winners below, along with links to more complete analyses of the two major awards, which we wrote up last night:

Katie also had an incredible NCAA season, where she won gold at the NCAA Championships in the 200 free (tied with Mallory Comerford), 500 free, and 1650 free. In the 500, Ledecky broke the NCAA and American records with her time of 4:24.06, and won the event by over 4 seconds. In the 1650, Ledecky set a Meet and Pool record with her time of 15:07.70. Katie also went a 9:10.49 in the 1000 free at the Stanford vs Texas dual meet, which was the fastest time in NCAA history and broke the Stanford team record held by Janet Evans by 20.2 seconds.

In her acceptance speech, Ledecky first thanked her entire family, then her teammates (Stanford and National Team), her coach Greg Meehan, and all the coaches she has ever had.

Next, Katie Ledecky offered a little bit of insight into her thoughts on the sport and extended a thank you to USA Swimming, and all those who attended the event: “We all set big goals, and it means a lot when you see you’ve achieved your goals on the scoreboard. [But] my very first goal was to make friends in this sport, and what you are all contributing tonight is to help young kids learn how to swim. I hope those young kids find the love of this sport that I did”.

The other nominees for this award were Lilly King and Simone Manuel. Lilly King won 4 golds at Worlds, and broke 4 World Records. Kobe Bryant described King as “my kind of athlete: intense, confident, always ready to seize the moment”. Simone Manuel won 5 golds and 1 bronze at Worlds. She also broke 3 World Records and in the 3 events she didn’t break World Record in, she broke the American Record.

To no one’s surprise, Caeleb Dressel takes home Male Athlete of the Year at the 2017 Golden Goggle Awards.

In his acceptance speech, Dressel recognized World Championship team captains Nathan Adrian and Matt Greversfor their leadership in Budapest. He also mentioned “my only fear in the sport is plateauing, not with medals or times, but learning.” The award was presented by Natalie Coughlin and former Olympic gymnast Nastia Liukin.

However, this one was all Dressel, as he followed up a jaw-dropping performance at the NCAA Championships with a mind boggling seven gold medals at the World Championships.

At NCAAs, Dressel three-peated in the 50 freestyle and repeated in the 100, breaking the American and NCAA records in the latter. However, perhaps his most impressive swim at the meet was the 100 fly, where he dethroned two-time champion Joseph Schooling in a new American and NCAA record of 43.58. He also joined Vlad Morozov in the elusive sub-18 second club for a 50 free relay split, hitting marks of 17.99, 17.71 and 17.93.

Despite his incredible NCAAs, his World Championship performance was what won him this award. After his performance at both NCAAs and U.S. World Trials, everyone knew Dressel was gonna be good in Budapest, but he really blew everyone away.

He won seven golds – three individual – tying the GOAT Michael Phelps for the most gold medals ever won at a World Championships. Individually he won the 50 free, 100 free and 100 fly, and added relay golds in the 4×100 free and medley in both the men’s and mixed categories. He added American record marks in both sprint freestyle events, and claimed another in the 50 fly where he finished 4th. Both mixed relays also broke world records.

Despite not walking away with the win, Kalisz truly had an incredible year. After winning a close silver in the 400 IM in Rio, the final in Budapest really wasn’t close, as the 23-year-old lowered his PB to 4:05.90 to win by almost two-and-a-half seconds. Prior to that swim, he won the 200 IM over a stacked field in another personal best of 1:55.56. Before this year he had never competed in the event at a major international meet due to the longtime reign of Phelps and Ryan Lochte.

Along with his World Championship performance, Kalisz won the men’s Arena Pro Series title and added another NCAA title to his resume with an American record breaking performance in the 400 IM.

King was the only American to set an individual world record this year, and the 100 was the more memorable of her two world record swims, thanks to a great buildup in her rivalry with Yulia Efimova.

A textile world record, a surprise world title for a swimmer who didn’t even attempt to make the Olympics in this event a year prior, and a culmination of a high-profile friendly rivalry with a former-teammate-turned-antagonist? This one was a slam dunk.

The only relay world record to fall this year in long course (outside of the still-new mixed relays) was another sure-thing winner, led by some of USA Swimming’s most iconic young swimmers.

Comerford was the obvious choice here, coming off a season in which she rocketed to a co-NCAA title alongside Ledecky and a U.S. National title over the top of Manuel.

Though we picked Ashley Twichell in our official ballot, we noted at the time that Grevers name recognition and status as a pool athlete would probably sway a lot of votes. It helps that Grevers is an immensely likeable and rootable swimmer who had a great year coming off of Olympic-year disappointment.

Coach of the Year: Greg Meehan

Another example of our ballot going a different direction but accurately predicting who would ultimately win. Meehan’s Stanford women were unstoppable in the NCAA, and Ledecky and Manuel both went on to win World Champs golds. Hard to argue with that.

Lilly King brings an excitement to swimming that is awesome. I just LOVE her!!! CONGRATS LILLY!!!

Why was there no Golden Goggle for swimmer with a disability?

Paralympics rock – while many of those swimmers are members of USA Swimming, USA Swimming doesn’t manage the elite side of Paralympic swimming – unlike most of the world’s national federations. Instead, that’s managed through a separate organization that is more straight-line tied to the USOC, so Paralympic swimming awards are given through the USOC awards programs. USA Swimming does give out the Trischa L. Zorn award, to recognize a swimmer or relay with a disability for an outstanding performance at its convetnion – https://www.usaswimming.org/docs/default-source/disabilitydocuments/recognition/zorninfo2017.pdf?sfvrsn=5

Yea, but the point is both mixed events, are new event, hence their WRs were likely to fall. Making the new world record in the women’s medley more impressive.

I think it would add to Dressel’s luster if he swam the IM and set some records.

The IM is a special event in swimming because it shows you’ve mastered all the strokes (and turns). Dressel is within range of the SC yards IM record.

Add the 200 fly, too. At Worlds he pulled away from the field the last 10 meters of the 100 free and fly. The way he finished those races tells me he could dominate the 200 fly if he chooses to.