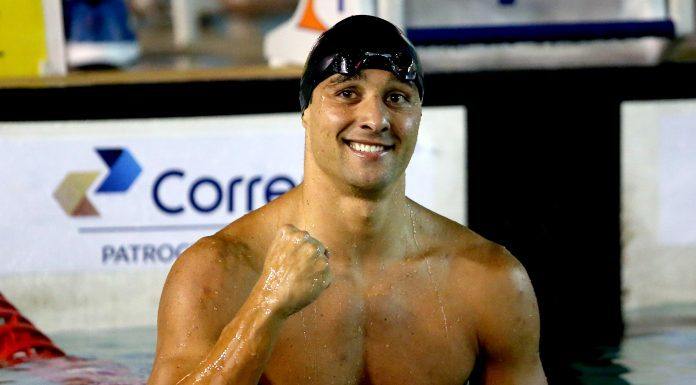 Thiago Simon took the men’s 200 breaststroke in a time of 2:02.58 setting a new South American record in the event. Simon’s time places him 12th in the all-time performers list for the event and would have been the third fastest time in the world in the 2015-16 season. Simon’s Olympic and Corintians teammate Felipe Franca finished second in a time of 2:03.49.

With their times both men placed themselves on the Brazilian team that will be headed to Windsor to compete at the 2016 World Short Course Championships.

The women’s 200 breaststroke South American record was also broken on Tuesday evening. Julia Sebastian of Argentina dominated the competition winning the event in a time of 2:22.28 finishing over five seconds ahead of the field.

The final event of the evening was the most exciting by far. Lucas Kanieski of Minas got his hand on the wall just two tenths of a second ahead of Brandonn Almedia of the Corintians in the men’s 1500 freestyle. Kanieski won the event in a new South American record time of 14:40.31 followed by Almedia who touched in a time of 14:40.33.

The swims by both Kanieski and Almedia helped their teams gain ground on the Pinheiros. After the first night of competition the Pinheiros finished with 441 points followed by the Corintians (234), GNU (231) and Minas (230).

The standings after the second day of competition are as follows: